The BugLady would like to dedicate this episode to the late (great) Cornell Professor Richard B. Fischer (January 19, 1919 – August 7, 2005) who taught the BugLady how to sneak up on insects (no bobbing or weaving, just slow and steady and straight ahead—words to live by), and who told his students “Don’t just tell them what it is, tell them ‘what about it.’” Forty-plus years later, the BugLady still uses something she learned in his classroom every day of her life.

We’re half-way between the Summer solstice and the Autumnal equinox, and there are only 142 more shopping days until Christmas (yes, there are count-down websites). The summer has been a bit dry and warm for the BugLady’s tastes, but she’s seen insects she’s never seen before and gotten some pictures she’s happy with. Mostly, she continues to experience a nagging concern about a decrease in both species numbers and diversity over the past five-plus years. Simply put, hitting the trail and finding insects who need their pictures taken (or luring insects to the porch light) is not the slam-dunk it used to be.

Here are some critters that she has stumbled across this summer – and some “What about its.”

Remember in a recent episode when the BugLady casually mentioned insects whose brains had been fried by parasites and who climbed to the tops of plants and acted weird? Quid erat demonstratum. For more info—Neuroscience for Kids. 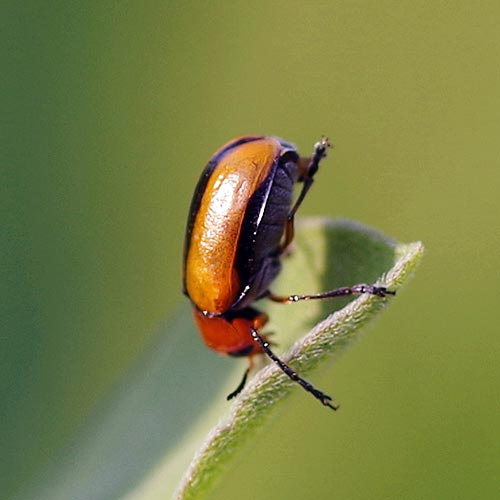 The BugLady hasn’t found a Baltimore butterfly in the Bog for a long time but she saw three caterpillars there at the end of May. Fingers crossed. In fall, Baltimore caterpillars feed on a wildflower called turtlehead; but they overwinter as partly-grown caterpillars, and when they resume eating in spring, their tastes are more catholic. These were enjoying some white ash. Yes, the butterfly is equally spectacular. See … Wissconsin Butterflies – Baltimore-Checkerspot. 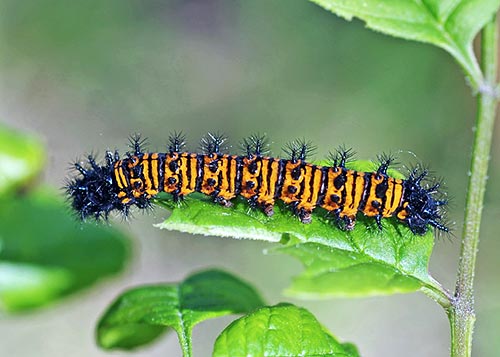 Perched high on a porch pillar late one night; this katydid didn’t leave, even though a camera was stuck in its face repeatedly. It was still there the next morning, partially through the process of shedding its skin. The Roesel’s katydid, of previous BOTW fame http://www4.uwm.edu/fieldstation/naturalhistory/bugoftheweek/roesels-katydid.cfm, is a non-native katydid! 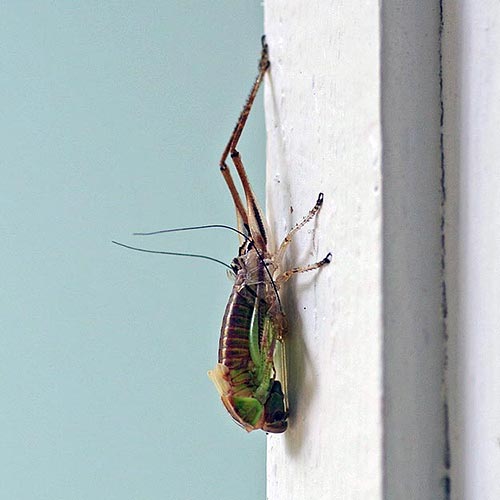 Wisconsin’s state bird. There are some 50 species of mosquitoes that hatch sequentially in Wisconsin throughout the season, but other than a big hatch in mid-June, the BugLady hasn’t been too bothered by them this summer (although with all the time she spends in the field, that bar is set pretty high). Cause for celebration? Maybe, but mosquitoes are meat and potatoes for a great many vertebrates and invertebrates. Remember—only the females suck blood, in order to support the egg-making process. Males (and females, on occasion) sip juices from flowers. 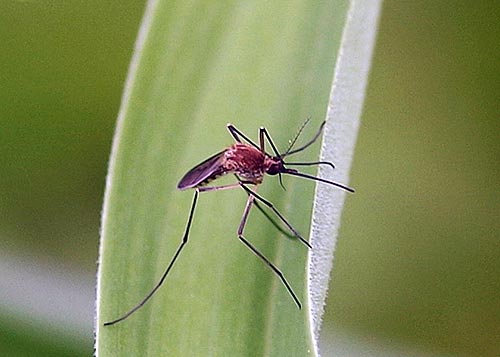 The BugLady was leading a field trip recently when she noticed a small bee messing around at the edge of a leaf. It suddenly broke away and flew off—carrying a disc it had sliced from the leaf’s edge. While she has seen the results of leafcutter bee work, she had not witnessed the process. The bee cuts oval pieces to line her tunnel in wood or soil and round ones to partition individual, back-to-back cells within the tunnel, and she provisions each cell before laying an egg and sealing it. According to the Audubon Society Field Guide to North American Insects and Spiders, although the adults may mature randomly within the tunnel, everyone waits until all adults have emerged from their pupal cases and then they exit the tunnel in front-to-back order! 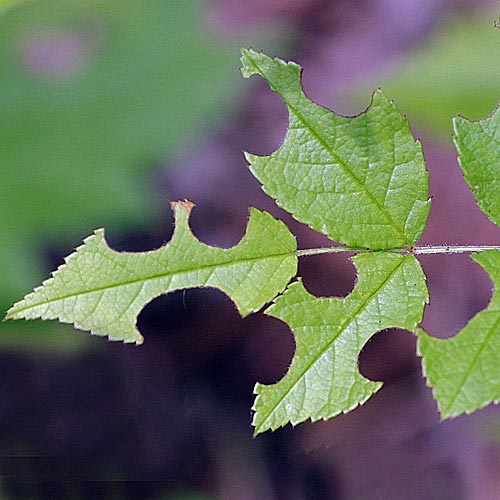 The remains were found on the driveway one morning, beneath the yard light, where the bats hang out. The BugLady rarely sees the big sphinx moths, and she clearly missed the bulk of this one. She checked her favorite moth book and decided on a sphinx called Pachysphinx modesta, and then things got complicated. Not only are there two common names connected with P. modesta (the Big Poplar sphinx and the Modest sphinx), there are two sphinxes called “Big Poplar sphinx.” It’s also a common name for the Western Poplar sphinx (P. occidentalis), which, as its name implies, it doesn’t occur east of the Great Plains (P. modesta can be found from sea to shining sea). The caterpillars feed on willow, poplar, aspen and cottonwood; adults do not feed. Here’s what it looks like assembled: http://bugguide.net/node/view/808514/bgimage. 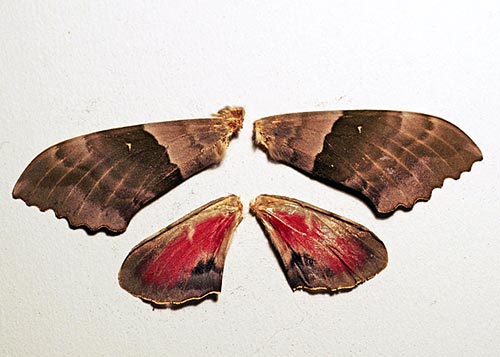 The BugLady chased this infant around in the sedges at the edge of a small wetland; being smaller and profoundly more nimble, it was pretty good at evasive action. The BSMK is found from eastern Canada, around the Great Lakes, west to the Great Plains. It sounds like this—be sure to turn the volume up—(and then poke around this interesting website – Listening to Nature. 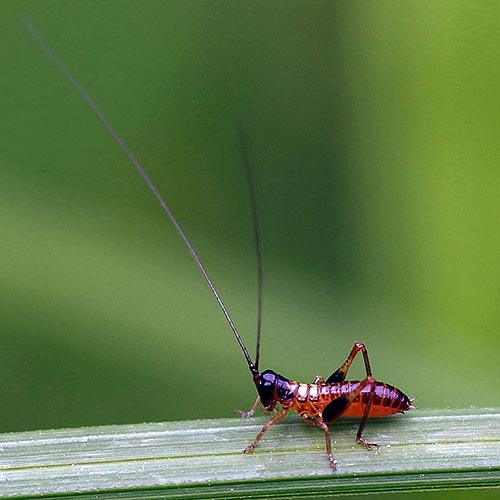 Who doesn’t love these gutsy little Jumping spiders, who give you the hairy eyeball before exiting? In their Field Guide to Insects of North America, Eaton and Kaufman state that jumping spiders are “as cute as spiders get.” The spiders’ dramatic leaps (they can cover a distance 40 times the length of their body) are not as risky as you might think—they spin a silky dragline before they go over the side. 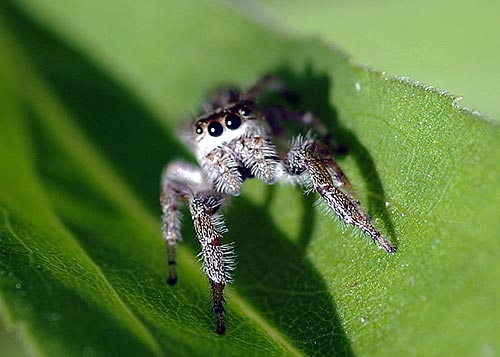 The BugLady has certain minimal standards for picture clarity, which this shot doesn’t meet, but, it has nine dragonflies in it!. These magnificent dragonflies have been migrating south along the western shore of Lake Michigan by the thousands—not just today, but for the past five days! In another six weeks, Monarch butterflies will be using the same corridor, along with darners and saddlebags dragonflies. How long will this show last? Only the darners know. If you’re in Southeastern Wisconsin, catch the show at Lion’s Den Gorge Nature Preserve east of Grafton. Wherever you are, if you see a feeding or a migrating swarm of dragonflies (it doesn’t have to be thousands), please report it at: The Dragonfly Woman. For more info about dragonfly swarms, here’s a BOTW from September of 2010 “Dragonfly Swarm”. What a magnificent natural phenomenon! 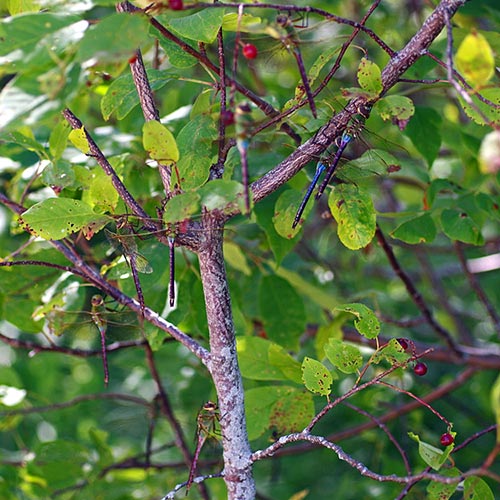 Some syrphid/hover/flower flies are big and clunky, but others—tiny, exquisite jewels. 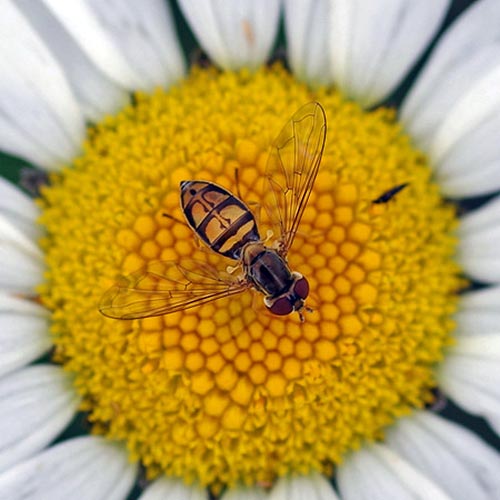 When the BugLady photographed this bumblebee, she caught a glint on the wing that was reminiscent of a drop of water. Imagine her surprise when she put the image up on the monitor! If researchers were tagging and studying bumblebees, they would mark the thorax, an easier location to spot in a flying bee (they even attach mini radio transmitters to some). No clue where the mark came from. 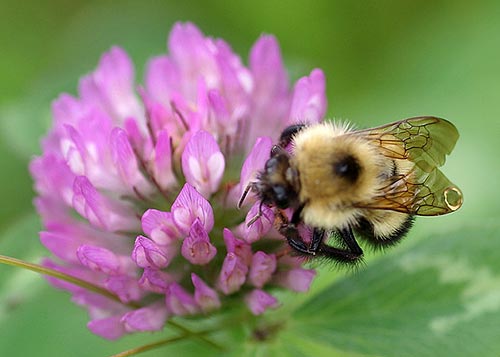 A reminder that not all bumblebee-shaped-objects are bumblebees. All-in-all, it’s not a bad idea to look like something that has a stinger. And while adult bumblebees feed on nectar, this doppelganger, one of the Laphria robber flies, preys on small to mid-sized insects. For information on Wisconsin’s robber flies, tiger beetles and butterflies, check out Renaissance man Mike Reese’s excellent website Wisconsin Butterflies. 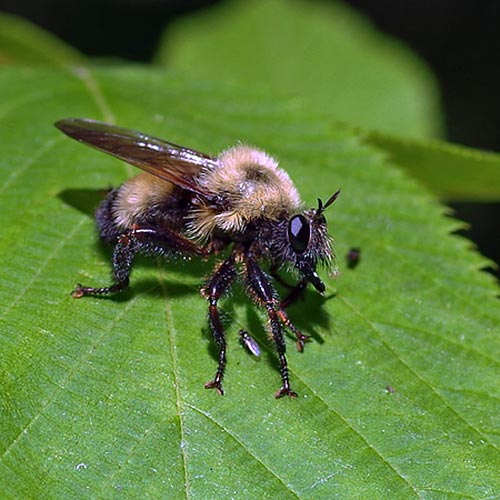 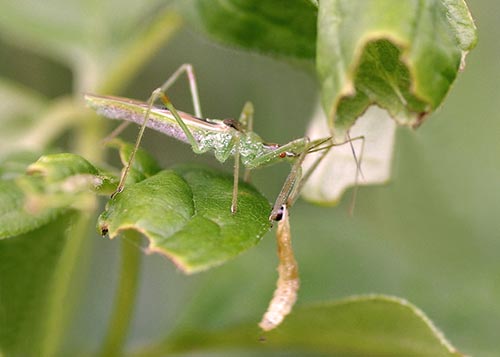 A final mystery. Clearly, some predator (screech owl?) made a meal of the rest of this fishfly (and what are the odds of its head dropping, just so, onto the goldenrod leaf?). There were lots of small signal winged flies on the surrounding vegetation, and one was perched on the fishfly head. It could have been a momentary perch, but these flies eat some decomposing material, so it might have been a lunch stop. 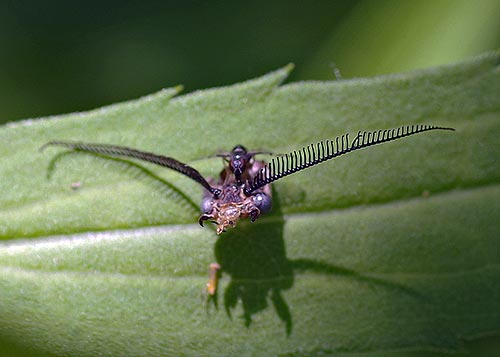 It's a Beetle! Really! (Family Ripiphoridae)