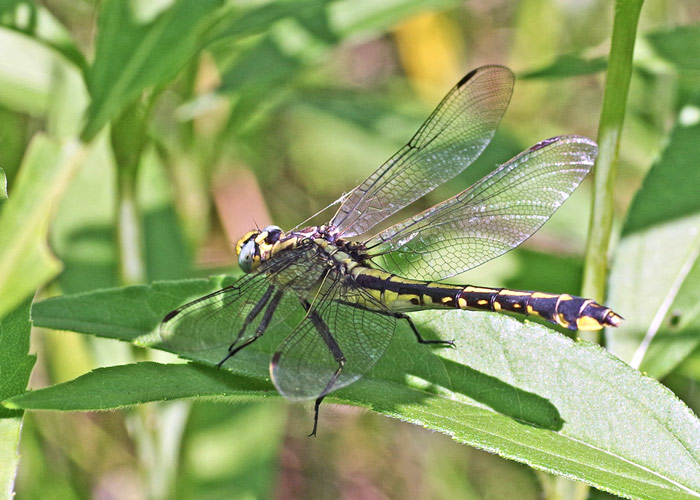 The BugLady has been checking the Wisconsin Odonata Survey website religiously to see if the dragonfly season has commenced, and she is pleased to announce that it has! Keep the site in mind on your spring and summer ramblings and share your sightings. Observers started reporting Common Green Darners on April 26, and the first Variegated Meadowhawk was logged on April 30. The BugLady is more than ready.

As their name suggests, clubtails (family Gomphidae) have clubbed tails (but sometimes just barely). The club is formed by three segments at the end of the abdomen that are flared to various degrees – males have larger clubs, club size varies by species, and in some species, clubs are pretty dramatic, click here, and click here. 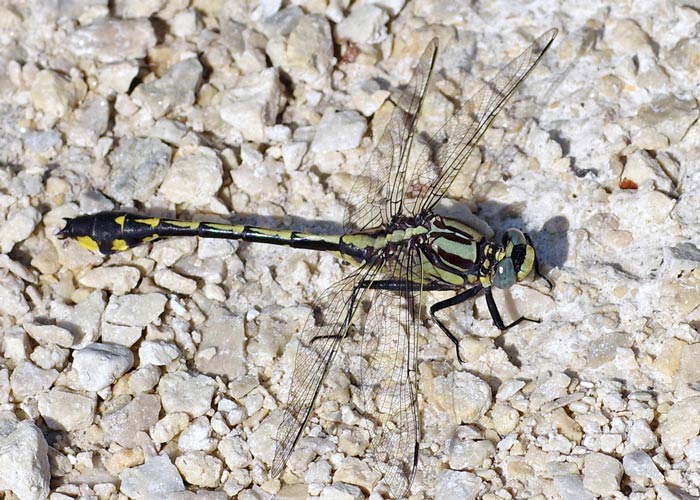 As a group, clubtails are medium-sized (1 ¾” to 2 ½” long) with green, blue or gray eyes that do not touch on the top of the head, and with clear, unpatterned wings and a striped body (the Wisconsin Odonata survey tells us that “Clubtail species are very similar to each other in some aspects, careful inspection is needed to identify them.”). They tend to perch on the ground and on rocks and lily pads.

The BugLady has been kind of easing into the Clubtails, starting with the local, fairly club-less Dusky, Ashy, and Lancet Clubtails and moving on to the Lilypad, Midland, and Arrow Clubtails. Seeing the more exotic members of the group will require some road trips.

Depending on how the spring progresses, she’ll have to wait about a month to see a Midland Clubtail (Gomphurus fraternus) (formerly in genus Gomphus); she usually stalks them as they bask on trails near the river in early June. Their range is “V-shaped,” stretching from Maine to Tennessee to Manitoba, centered around the Great Lakes. 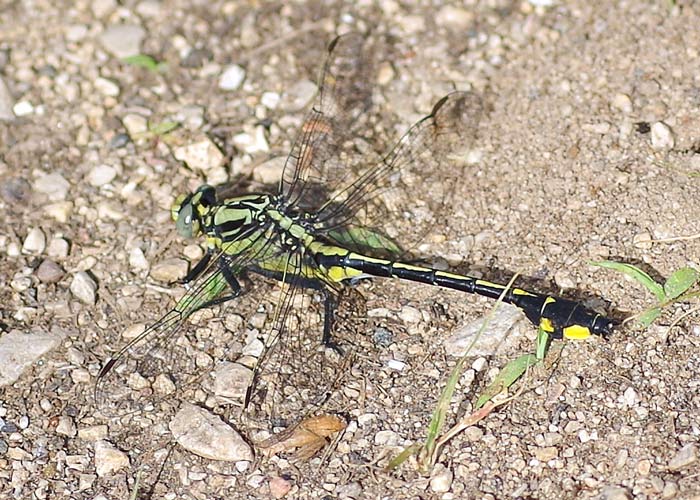 They’re are powerful flyers and avid hunters that can grab other dragonflies out of the air. In his 1901 report Aquatic Insects in the Adirondacks, J. G. Needham wrote “This vigorous species seems to prefer the larger bodies of water. The imago [adult] is a very strong flyer. It skirts the edges of streams with dashing sweeps which seem to proclaim it master of the situation. I have several times seen it feeding on other dragon flies as large as Mesothemis simplicicollis [now Erythemis simplicicollis, the Eastern Pondhawk].” There’s a picture in Kurt Mead’s Dragonflies of the North Woods of an immature female Midland Clubtail that nabbed an immature male, and Mead says that they’re agile enough to capture butterflies, too. 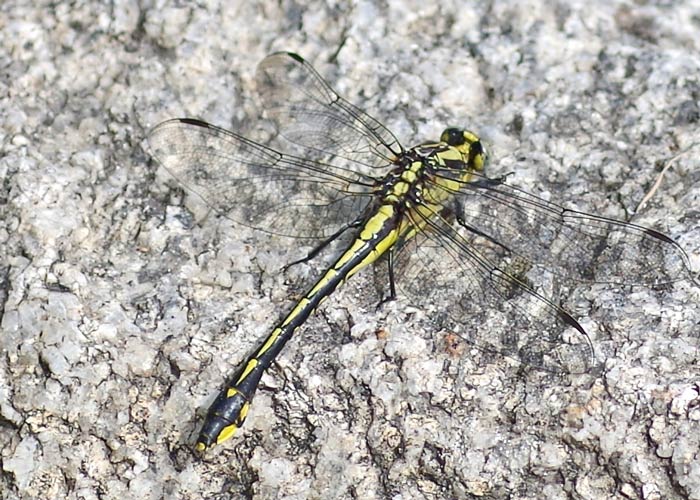 For their eggs Midland Clubtails prefer moving water – sunny, well-oxygenated rivers and large streams with some vegetation, a moderate-to-fast current, and a fine sand, mud, or clay bottom, but they’re also found at the edges of large lakes with waves. The female has no ovipositor and can’t insert her eggs in vegetation, so she uses waves or water currents to wash them from the tip of her abdomen, sometimes partially submerging in order to accomplish this. Many Gomphids enclose their eggs in a gelatinous wrap that glues them to rocks and logs.

Their chunky naiads https://programs.iowadnr.gov/bionet/Inverts/Taxa/813 are burrowers. Needham wrote of the genus “The nymphs form the most important part of the bottom fauna in all clear waters. They are active burrowers, taking their prey either on or beneath the surface of the bottom silt. They are very rapacious, and will eat almost any living animal small enough to be held by their powerful, grasping labia.” Many species spend two or three years in the aquatic, naiad/nymph stage. 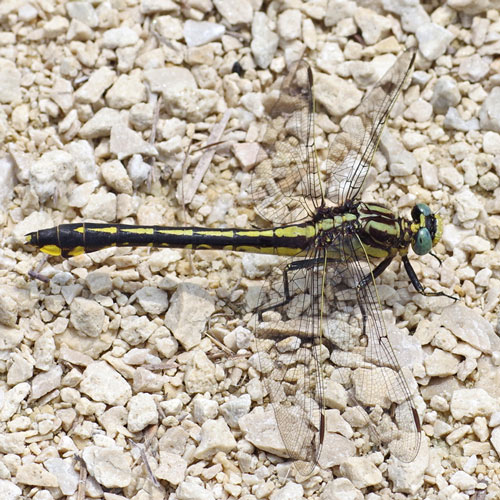 Midland Clubtails are, overall, yellower in the north part of their range, and darker at the southern edge of their range. In 1958, the species was divided into two subspecies, Gomphurus fraternus fraternus and G. f. manitobanus, separated by differences in size and color and, to some extent, geography. Overall, G. f. manitobanus is smaller and paler, with more extensive yellow markings, and its range has been thought to be limited to north-central Canada. But, according to Gary Paulson in Dragonflies and Damselflies of the West “Populations on the Red and Assiniboine Rivers in southern Manitoba named as separate subspecies of G. f. manitobanus, smaller and paler than elsewhere, with yellow stripe down tibiae and prominent dorsal yellow spots on S9-10. These attributes may occur elsewhere on the Great Plains.”

The larger and darker Gomphurus fraternus fraternus has a generally more southern and eastern range. The two overlap in eastern Manitoba. 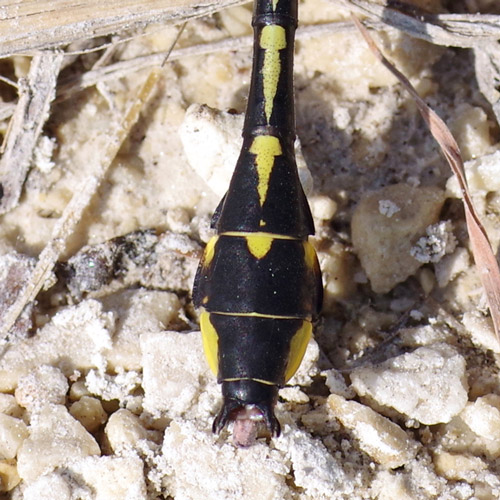 The BugLady found an interesting paper that documented a period of oxygen depletion and pollution in Lake Erie during warm weather in the mid-1950’s. This led to a die-off of burrowing mayflies (whose naiads are also aquatic), and within five years, the once-abundant Midland Clubtails that preyed on them were gone. John Muir nailed it – “When we try to pick out anything by itself, we find it hitched to everything else in the Universe.”