Recently, the BugLady got a phone call from a reporter who asked about the clouds of small, flying insects (they were midges) that were attracting attention in his community, so she decided to spruce up this BOTW from five years ago (new words, new pictures). Midges out and about now, are able to tolerate the unpredictable weather on either side of summer, dancing up and down in the cool air of early spring and late fall, especially near wetlands (their rapid wing-beats raise their body temperature). The Diamesa Midge Diamesa nivoriunda (snow-born midge—probably) one of the two species on the sumac, is in a subfamily called the snow midges, and they fly from September into April. 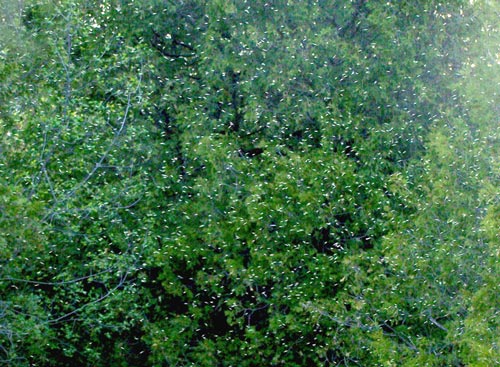 Clouds of midges are an often misunderstood and distinctly non-vampire-ish assembly. Big flocks of small flies (even of mosquitoes) tend to be bastions of (non-biting) male solidarity, which means that aside from the possibility of inhaling a bit of flying protein, it’s safe to immerse yourself in a herd/flock/bevy/pride/pod of midges (unless you’re allergic—more about that later). Check out the chapter on midges in the excellent A Guide to Observing Insect Lives by Donald W. Stokes for information about masses of midges and about the tendency of some species to orient over a “swarm marker” and stay within a midge-eyesight of it.

Midges, in the fly family Chironomidae, are mosquito doppelgangers, with only subtle variations visible to the eye. Midges hold their wings out to the side a bit when at rest, and mosquitoes tuck theirs over their backs. While both typically rest with only four of their six feet on the ground, mosquitoes tend to raise their back pair of feet, while midges lift the front pair (according to bugguide.net, chironomidae “comes from the Greek cheironomos—’one who moves the hands’ (which refers to the front legs, often raised and vibrated).” Midge antennae tend to be even more feathery than those of a male mosquito. And, of course, mosquitoes have those familiar, piercing mouthparts that are lacking in midges.

Adults are harmless, but midges “take the rap” for the actions of other biting Dipterans like mosquitoes, blackflies, no-see-ums, and punkies/gnats (and many of the common names given to midges, both sacred and profane, are interchangeable with those of their blood-sucking cousins). The older literature tells us that adult Chironomids do not even eat, but recent researchers speculate that midges might dine sparingly on some carbs/sugars. When the BugLady photographed several kinds of midges on staghorn sumac stems, they sure looked like they were feeding on something at the base of the hairs. Hairs that cover both the fruits and the new growth of staghorn sumac are glandular. The hairs on the fruits contain a red cell sap, as well as tannic, gallic, mallic and citric acids (which explains why, when the berries are soaked in water for a few hours, the water takes on a refreshing, tart, lemonade-y quality—do NOT try this at home if you are allergic to cashews), and the hairs on the stem are similarly endowed.

Adults take to the air in a mating frenzy (the BugLady calls this the Normandy Beach strategy of reproduction), surviving only a few days or weeks (females live longer—more fat reserves—she’s designed that way, right out of the box. Some insects accomplish that by spending an extra instar eating as females, emerging later than males but better fed). Swarms are like big, open-air singles-bars, crowded with males hoping to attract females. His fancy antennae are tuned to the high-pitched frequency produced by the female’s wing beat, and he can hear her sound even through the hum of the party. If a female does enter the cloud, she pairs up with a guy and they leave together. He subsequently returns to the group while she’s out laying eggs in gelatinous rafts on the surface of the water (the BugLady senses an eye-roll from female BugFans).

Eggs hatch in a few days. Midge larvae/maggots may live for up to three years in habitats that range from damp edges to depths of many fathoms in both salt water and fresh (fathom, a measurement of about 6 feet, comes from the Old English word faethm meaning outstretched arms or the length of outstretched arms). Kaufman and Eaton, in Field Guide to Insects of North America, say that many larvae build tubular retreats by gluing together small particles of stuff from their surroundings, using globs of mucous—a neat trick, underwater.

The red, hemoglobin-like pigment found in some species gives them the nickname “bloodworms” (a name that’s shared by a bunch of unrelated worms); the extra “hemoglobin” lets them pick up and hang onto oxygen more efficiently in habitats where there isn’t much of it, like the muck at the bottom of a pond. Their method of locomotion—thrashing back and forth—also helps them capture oxygen. Because of their ability to deal with low oxygen conditions, the numbers and species of midge larvae are considered indicators of water quality; and the presence of some pollutants causes characteristic “birth defects” in the larvae. 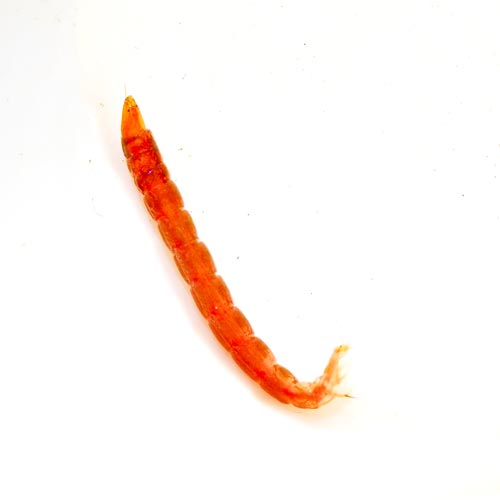 Bloodworms prey on mini plants and animals and scavenge on organic debris. They are, in turn, a huge part of the diet of many fish (and so are available in pet stores), and fish leap out of the water to snag adult midges dancing above its surface (though the BugLady can’t imagine that midge calories gained make up for the leap calories used). Trout like to grab them from below as the adults emerge from their pupal case, lodged in the surface film. Besides fish, they are also prized by a variety of aquatic insects; swallows, bats, dragonflies and damselflies, and by the lovely dance fly, who presents his midge to the fly of his dreams in order to prove his worthiness.

Is there a down-side to midges? One source noted that large numbers of midges perched on buildings might desecrate exterior walls with midge-poop (which seems like incontrovertible proof that adult midges eat). And, apparently, a heap of recently deceased midges doesn’t smell so good. Surprisingly, there is a large body of writings documenting human allergic reactions, including asthma, in the presence of midges (in both the adult and larval stages); apparently, it’s a reaction to the “hemoglobin” in the larva’s body—hemoglobin that gets passed on from larva to adult.