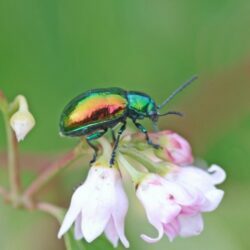 Summer has reached its half-way point, and the BugLady has been recording the changing of the guard. The adult lives of most insects are brief – four to six weeks for many, and considerably less for some. Bluet damselflies are fading, but meadowhawk dragonflies are taking the stage. Little Wood Satyr butterflies are hard to find, but Common wood nymphs now flit through the fields. You get the picture. Here are some bugs that the BugLady found in the first half of summer. 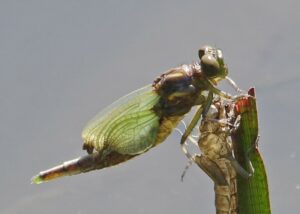 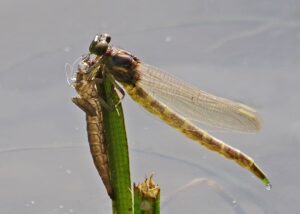 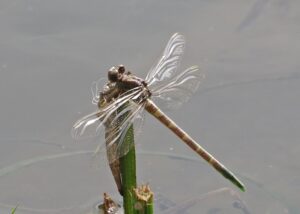 ARROW CLUBTAIL: In early July, the BugLady came across this just-emerged dragonfly sitting on a stalk in the Milwaukee River. She photographed it for half an hour as it lengthened and strengthened and spread its wings and grew its abdomen. She guarded it from marauding geese and grackles. And she watched as it took its maiden voyage, eight feet straight up and true – into the beak of a swooping Cedar Waxwing. She may have used a few bad words. 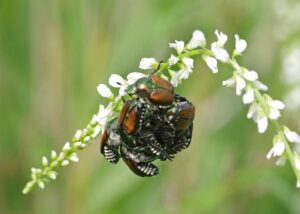 JAPANESE BEETLE: Precarious as this bundle of beetles looked, it kept its shape as it fell off and into the grasses. In order to jump-start her love life, a female Japanese beetle may use “come hither” pheromones, but this aggregation of beetles was probably initiated (inadvertently) by the plant itself. Research suggests that a female Japanese beetle chewed on a leaf, and the leaf gave off signature chemicals (OK – feeding-induced plant volatiles), and that instead of repelling the beetles, the scent attracted more beetles, both male and female, to feed. And, since all those guys and gals are in the same neighborhood… 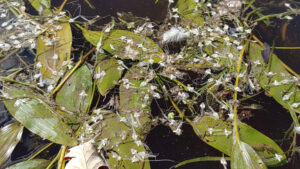 MAYFLY MOLT: BugFan Freda sent this amazing “What-is-it?” picture recently, taken from a canoe on the Milwaukee river. Mayflies (called “lake flies” regionally) emerge from their watery cradles by the googol. Their lives are brief, averaging only three days (not coincidentally, the name of the mayfly order is Ephemeroptera).

Mayflies are the only insects that shed their skins after they reach the winged adult stage (silverfish shed as adults, too, but they’re spindle-shaped and wingless). The mature mayfly naiad crawls out onto a plant or rock and sheds its final skin (exuvia), emerging as a form called a subimago (or a “dun” if you’re a fly fisherman) that is cloudy-winged, dull in color, weak-flying, and not ready to reproduce. The sub-imago rests (often overnight) and then sheds again, this time into a mature adult/imago with shiny wings (a “spinner” to fishermen). Here’s a typical adult/imago. No – scientists do not know how this pre-adult stage benefits the mayflies – lots of insect groups apparently has a subimago stage in ancient times, and most have dropped it from their repertory.

Freda’s picture shows the exuviae of lots of sub-imagoes – it must have been an amazing sight to see! Scroll down this series of pictures of that final shed. 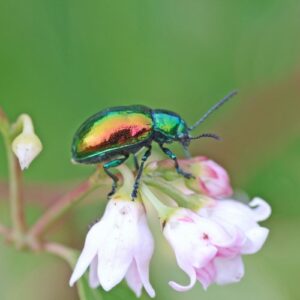 DOGBANE LEAF BEETLE: Its fabulous, shimmering exterior is all done with mirrors (complex nanoarchitecture). Light is bent when it hits small, randomly-tilted plates that sit between the pigment layer and the top layer of the beetle’s cuticle, and the beetle’s color changes depending on the angle of the eye of the beholder. What good is that glow? Rather than being an aid in courtship or a warning of the beetle’s toxicity (and this particular beetle is, but not all iridescent insects are), this fiery iridescence actually camouflages it. To test the hypothesis, researchers disguised meal worms with beetle elytra (the hard outer wings) – some shiny and some not – and then hid them. Birds found and ate 85% of the “dull-winged meal worms,” but only 60% of the “iridescent meal worms,” and the scientists themselves found it difficult to locate the shiny ones. 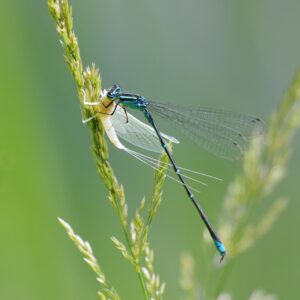 STREAM BLUET AND MAYFLY: In order to make it to adulthood, a mayfly naiad must avoid being eaten by fish and a variety of insects during its aquatic stage, and by fish, birds, fishing spiders, frogs, and other predators as it completes both of its molts. When it takes to the air, more predators await. This mayfly became lunch for a Stream Bluet damselfly. 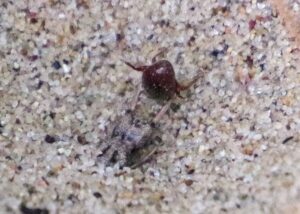 DOODLEBUG: The BugLady found this doodlebug on the dunes at Kohler-Andrae State Park in mid-July, plying its trade. She looked into lots of inverted, sandy cones before she found one that held prey – in this case, a small spider. The doodlebug will grow up to be an antlion . For an account of the life of a doodlebug, see this former post. 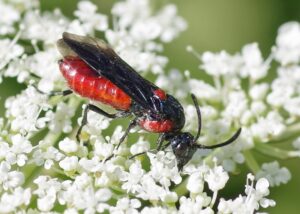 SAWFLY: Sawflies are not flies, but are primitive wasps with no stingers (as she did when she wrote her first episode about sawflies in 2009, the BugLady recommends reading the sawfly chapter in David W. Stokes’ excellent A Guide to Observing Insect Lives). Sawfly larvae look a lot like butterfly and moth caterpillars, but there’s a difference in the arrangement and types of legs. This beauty just might be the Poison ivy sawfly (Arge humeralis) , whose pretty cute offspring, the BugLady is going to have to keep a cautious eye out for. “Sawfly” because the female uses a saw-like structure at the end of her abdomen to cut slots in vegetation to lay her eggs in. 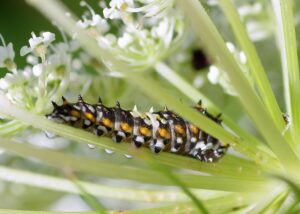 BLACK SWALLOWTAIL CATERPILLAR: While the BugLady was photographing the sawfly, she noticed a prickly head among the Queen Anne’s lace florets, so she bent the stem sideways to see what it was. There was a cute little jumping spider under there, too, which she hoped did not have designs on the caterpillar. Black Swallowtails lay their eggs on plants in the carrot family, and most gardeners who plant dill are familiar with them (and, the BugLady hopes, are generous enough to share). 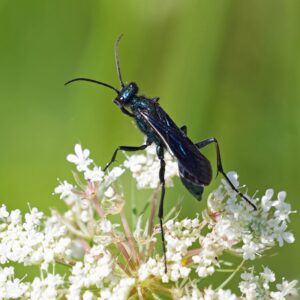 BLUE MUD DAUBERS: They are all over the Queen Anne’s lace these days. Adults cruise the flower tops, sipping nectar and looking for spiders to cache in the egg chambers of their offspring, who will grow up on protein but eschew it as adults. Sometimes the wasps pick spiders right off of their webs, and they especially like to collect Black widow spiders (which are here in God’s Country but are rare). They grab spiders with their mandibles and paralyze them with a sting, but they don’t bite people, and you have to rough one up considerably before she’ll sting you. 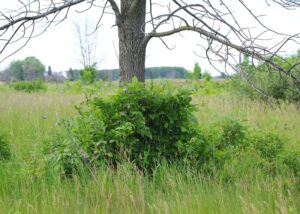 EMERALD ASH BORER: The BugLady loves ash trees, but these days, the landscape is littered with their skeletons. The first Emerald ash borer was detected in Wisconsin in Ozaukee County during the summer of 2008, though the EABs had undoubtedly been around for a few years before that. The picture shows an ash that is fighting for its life, a battle that it will not win. The top of this ash is dead, because the EAB larvae’s tunnels (galleries) just below the bark interfere with the flow of nutrients between the crown of the tree and its roots. The stressed tree responds by growing a bunch of shoots (called epicormic sprouts) from dormant buds in the bark of the trunk. The leafy sprouts, which are below the EAB damage, will allow the tree to photosynthesize – for a while. Read about EABs in a previous BOTW. EABs are, undeniably, beautiful beetles: [1] , [2] , [3] . 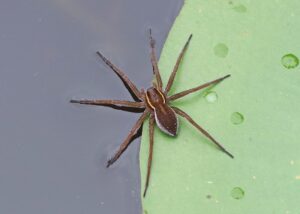 SIX-SPOTTED FISHING SPIDER: Moving from a “solid” water lily leaf to a liquid substrate is no trick at all for a Six-spotted Fishing spider (the six spots that give it its name are on its underside) – in fact, it has more moves on the water than it does on dry land. It can walk, run, sail, or skate over the surface film and can dive under it, too. 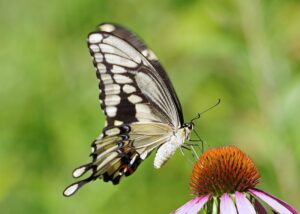 GIANT SWALLOWTAIL: If there’s anything more stunning than a couple of Giant Swallowtails dancing in the air over purple coneflowers, the BugLady doesn’t know what it is.