The BugLady is invariably startled when she encounters this small Coleophera moth. Partly because it rolls its tiny wings around its tiny body like the proverbial gold cigar (instead of holding them out flat), but mostly because it combines tiny with shiny. Although Coleophora moths are small, their genus is large, with around 1,000 species known worldwide—maybe 100 in North America—and many probably still undescribed (ScienceSpeak for “they’re in line, we’ll get to them,” or “They look so much alike we haven’t differentiated them yet). The genus is located, understandably, in the Micro-lepidoptera group. Micro-lepidopterans tend to be both small and confusing.

The BugLady is guessing that this is the Metallic Casebearer (Coleophera mayrella), based on some diligent picture-keying at bugguide.net. “Coleo” and “phera” come from the Greek koleon (sheath) and pherein (carry). 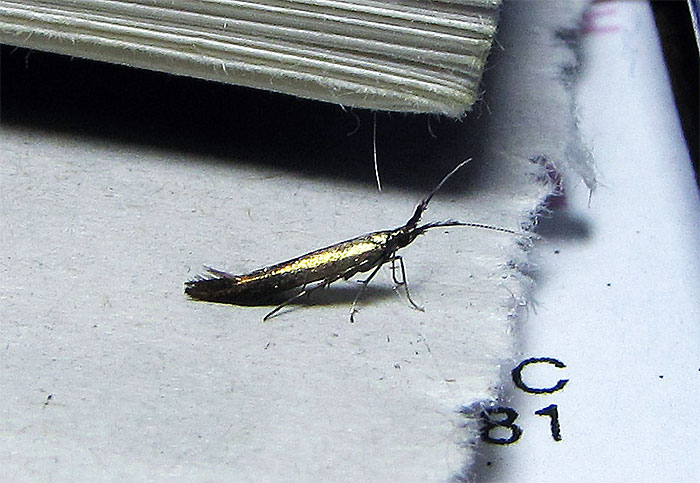 Sources seem to agree that it’s the larval stage that puts the Coleophora on the map. Many Coleophora larvae start out life as leaf-miners—eating and ambulating in the tissue between the top and bottom layers of a leaf and leaving tell-tale trails—or feeding elsewhere within various parts of their specific host plant. Soon, they make a life-style change, eschewing the innards of the leaf for its outside. They fashion a portable case by gluing together with silk some tiny pieces of their food plant plus poop. These they tote about, snail fashion.The minute cases may be hard, soft, camouflaged, or conspicuous (one group builds a characteristic pistol-shaped case from silk and an “unknown secretion”). Since the adult moth weighs in at about ½” and the larvae are smaller, and since they may discard cases and build larger ones as they grow; the BugLady wonders how many cases, discarded or inhabited, she might have seen and written off as Bug Poop. Despite their disguise, the larvae are attacked by parasitic wasps and by a few flies.

When they move to the leaf’s outsides, the larvae become leaf skeletonizers. They also dine on flowers, seeds, and skins of fruits, which they must poke their heads out of their cases to eat. They overwinter in the case and also pupate in it, doing a U-turn within the case before pupating and emerging (through the back door) as adults in mid-summer.

A winged speck of gold!