These days the BugLady’s walks are punctuated by the small “pop” of grasshoppers taking off and landing, and by the whir of their wings. Grasshoppers and bumblebees seem to dominate the landscape in the weeks leading up to official autumn.

The BugLady first posted this Bug o’the Week (or a reasonable facsimile thereof) in the summer of 2009, titling it “Red-legged Grasshoppers” (OK – it was because she incorrectly-identified a Two-lined grasshopper). She has never developed an eye for grasshoppers, since they are uncooperative photographic subjects that she mostly sees from the rear, so the labels on many of her grasshopper pictures are tentative. This episode has been renamed and spruced up with some new info and new pictures. 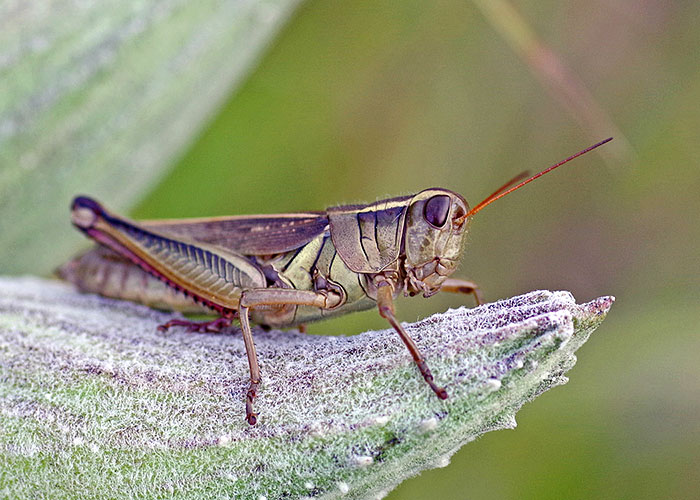 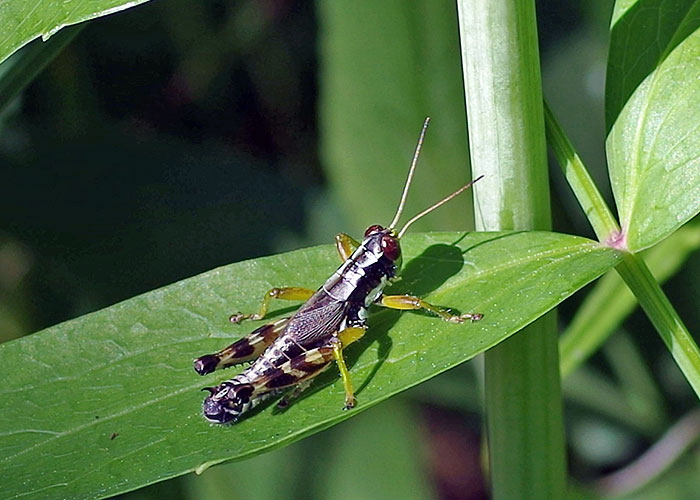 Short-horned grasshoppers are insects of open spaces – medium to large-sized grasshoppers and locusts that are an important food source for birds, including some birds of prey (to whom they may transmit tapeworms and other parasites). Skunks, snakes, and toads eat the adults; and skunks, shrews, mice and moles find eggs laid in soil and eat them.

Melanoplus grasshoppers are in the Spur-throated grasshopper subfamily Melanoplinae, so-named for the spur that protrudes from the underside of their body, between the front pair of legs. Bugguide.net says that the genus name means “clad in dark armor.” Melanoplus is a large genus that occurs around the world, but most of the 240 or so species are found in fields, cities, suburbs, and open woods in North America. Largely vegetarian and largely feeding on herbaceous plants, the genus (and family) includes some notorious agricultural pests (though most are not), so a lot of internet hits are from State Entomology departments.

As bugguide.net says of the genus Melanoplus:

“Many of the species look very similar, while only a relative few are uniquely distinctive looking. Positive identifications for many species can only be achieved by examining the male genitalia on an actual specimen. Images alone are often not enough to reach a conclusion.” 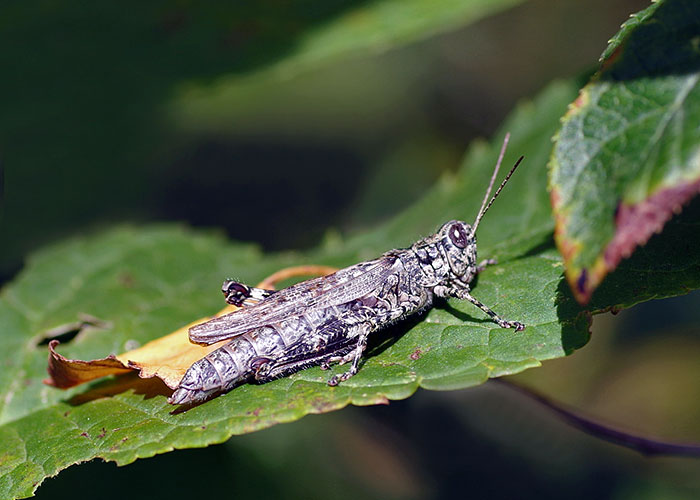 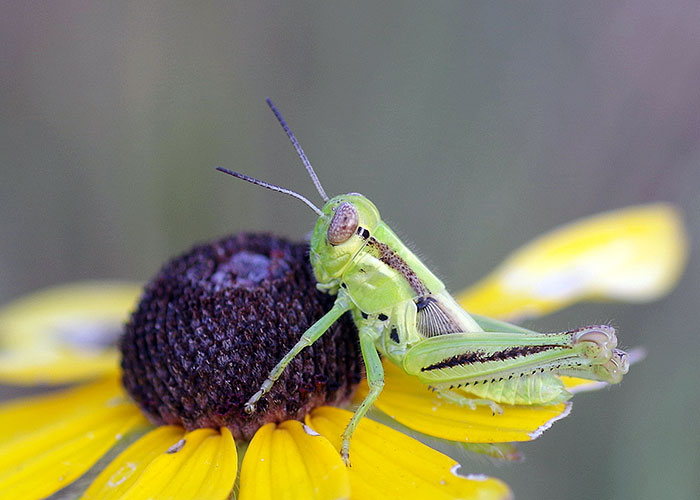 When a young Melanoplus grasshopper’s fancy turns to love, he doesn’t stridulate (make noise by friction) or crepitate (leap into the air, hover, and rattle his wings), he simply grabs a female and introduces himself by shaking his legs in a characteristic way. If she is of a different species, she won’t recognize the sign language and will rebuff him. Females use their abdomens to drill holes in soil or other soft material, and they lay about 20 eggs in each hole. This female Two-lined grasshopper excavated in a pretty firm dirt road surface, and while she was ovipositing, she often had her two hind legs off the ground. The BugLady wondered if “pumping” the legs aided in ovipositing. The eggs overwinter; nymphs appear in late spring and mature by early summer. 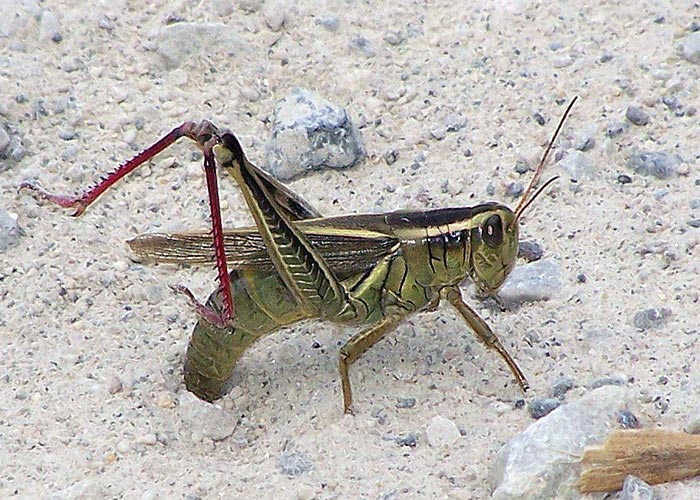 The extinct Rocky Mountain locust/grasshopper (Melanoplus spretus) produced what were possibly the largest assemblages of locusts anywhere. A swarm in 1875 was measured at 1,800 miles long by 110 miles wide (198,000 square miles), covering the equivalent of the northeastern US from Maine through Pennsylvania and Delaware and containing an estimated 12.5 trillion grasshoppers (which was good enough to set a posthumous Guinness World Record). According to Wikipedia, “The locusts ate not only the grass and valuable crops, but also leather, wood, sheep’s wool, and in extreme cases, even clothes off peoples’ backs,” and several states passed laws offering bounties and requiring the populace to spend some time each week eradicating grasshoppers. One entomologist came up with a recipe for grasshoppers sautéed in butter, but it was not embraced. It’s not known for sure why they crashed; but several possibilities are suggested in this New York Times article.

According to The Audubon Society Field Guide to North American Insects and Spiders, the “Grasshopper Glacier,” near Cooke, MT, contains the bodies of millions of Rocky Mountain and other grasshoppers that have been embedded there, some for millennia. It is speculated that swarms of the grasshoppers landed on the glacier and froze, or they were caught in storms and forced down on the glacier, or, theorizes Elizabeth Lawlor in Discovering Nature at Sundown, an updraft off the frigid glacier “flash-froze” flying grasshoppers, causing them to fall onto the surface of the glacier and get covered with snow. At any rate, each year, to the delight of paleontologists and grasshopperologists, melting at the leading edge of the glacier releases thousands of grasshopper corpses for carbon-dating and other study. The remains from one large event produced a dark band that can be seen in today’s ice.

Lawlor also reports on the dramatic population explosions experienced by some arid-country species of Melanoplus grasshoppers when unusually high rainfall results in lots of vegetation and in extraordinary numbers of eggs being laid. This “boomer” generation is dark-colored where their parents were light, and social where their parents were shy, and ravenous – wiping out the vegetation where they sit. Though they are not strong fliers, they are blown downwind in great numbers (and have been recorded at an altitude of 20,000 feet), looking like a “hungry black snowstorm” that is “virtually unstoppable.” 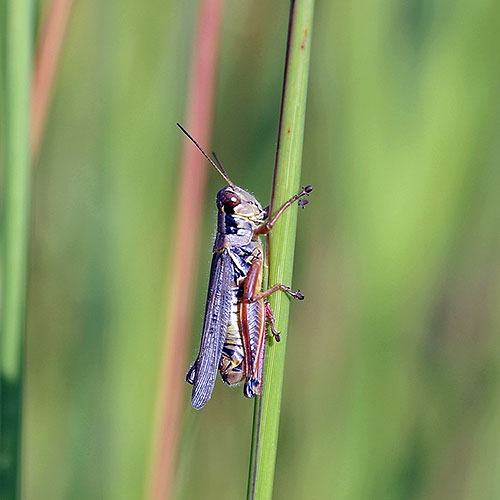 A ton of locusts (the BugLady finds it hard to wrap her mind around “a ton of locusts”) can eat as much as can 250 people – or 10 elephants.

The BugLady remembers BugFan Mary telling a school class in fall that the grasshoppers they were netting were (as are the BugLady’s walking companions) “dead, but they didn’t know it yet.” Why? See Bug o’the Week – Nematodes.