Short-horned grasshoppers are classified in the order Orthoptera—straight-wing, and the family Acrididae. Largely vegetarian, the family includes some notorious agricultural pests. These are insects of open spaces—medium to large-sized grasshoppers and locusts that are an important food source for birds including kestrels, marsh and red-shouldered hawks (to whom they may transmit tapeworms and other parasites). Skunks, snakes, and toads eat the adults; skunks, shrews, mice and moles feed on eggs in soil. The Short-horned grasshopper family includes insects called “grasshopper” and insects called “locust,” and the terms seem to be used interchangeably. The Carolina locust, in the band-winged grasshopper group, is almost always called a locust, but Grasshoppers in the genus Melanoplus may be called either.

The Melanoplus grasshopper/locust, in the Spur-throated grasshopper subfamily, is found in fields, cities, suburbs, and open woods. A male Melanoplus grasshopper doesn’t stridulate (make noise by friction) or display, he grabs a female and introduces himself by shaking his legs in a characteristic way. If she is of a different species, she won’t recognize the sign language and will rebuff him. Females drill holes in soft soil, using their abdomens, and they lay about 20 eggs in each hole. There, the eggs overwinter. Nymphs appear in late spring and mature by early summer. The BugLady photographed this misguided female ovipositing in a hole on a pretty firm gravel/dirt road surface. In many of the series of pictures the BugLady took, the grasshopper had her two hind legs off the ground, and the BugLady wondered if “pumping” the legs aided in ovipositing. 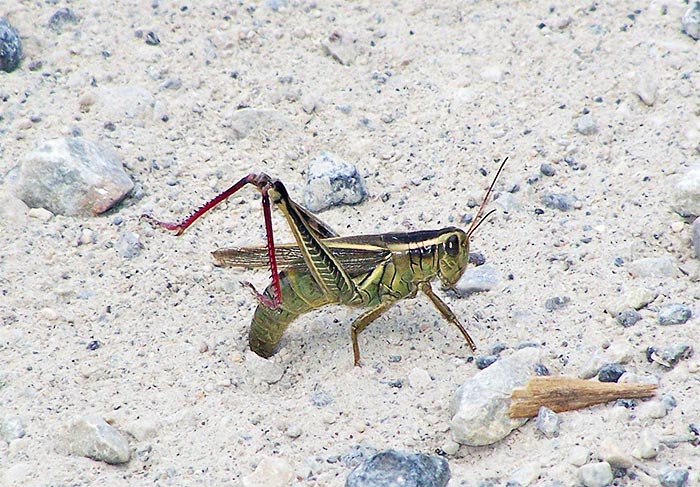 According to The Audubon Society Field Guide to North American Insects and Spiders by Lorus and Marjory Milne, the “Grasshopper Glacier” near Cooke, MT contains millions of embedded specimens of the related, formerly-abundant-but-now-extinct Rocky Mountain Grasshopper. It is speculated that swarms of the grasshoppers landed on the glacier and froze. The scribes do not record whether this incident (or the level of “street smarts” it demonstrates) had anything to do with their extinction. A more generous source, Elizabeth Lawlor in Discovering Nature at Sundown, theorizes that an updraft off of the frigid glacier “flash-froze” a swarm of flying grasshoppers which then fell onto the surface of the glacier and got covered with snow. Each year, to the delight of paleontologists and grasshopperoligists, the melting of the leading edge of the glacier releases thousands of grasshopper corpses for carbon-dating and other study. Their remains produced a dark band that can be seen in today’s ice.

Lawlor also reports on the dramatic population explosions experienced by some arid-country species of Melanoplus grasshoppers when unusually high rainfall results in lots of vegetation and in extraordinary numbers of eggs hatching. This “boomer” generation is dark-colored where their parents were light and social where their parents were shy, and ravenous—wiping out the vegetation where they sit. Though not strong fliers, they are blown downwind (they have been recorded at an altitude of 20,000 feet) in great numbers, looking like a “hungry black snowstorm” that is “virtually unstoppable.” A ton of locusts (the BugLady finds it hard to wrap her mind around “a ton of locusts”) can eat as much as can 250 people—or 10 elephants.