Well, the weather outside is frightful, and bugs are pretty sparse out on the landscape. In previous BOTWs the BugLady has discussed some of the invertebrate inquilines (harmless co-habitants) of her abode. Leaf-footed bugs, ladybugs, sowbugs, camel crickets, false bombardier beetles, box-elder bugs, and long-bellied cellar spiders have all starred in BOTWs. This begins an off-and-on series about household bugs whose sightings may stimulate a call to the (ex)Terminator. Not large, flashy “T-shirt bugs—these are mini-bugs that slip under the radar. This winter, we will Venture Where No BugFans Have Gone Before—into the traps in the sink, the cracks in the floor, the bathroom wall, the sack of dog food, the flour bin, and the compost bucket.

Most of us are introduced to/invaded by meal moths when we store bird seed indoors or purchase some grain or chocolate product that was incorrectly warehoused. The BugLady once heard a story from a guy who sold fundraiser chocolate bars about a shipment of (a rival company’s) chocolate bars that arrived covered with frass (bug poop). Meal moths are the house guests that come and stay and stay and stay. The BugLady, who is not usually a conspiracy theorist, suspects the manufacturers of plastic food storage containers of “stealth releases” of meal moths. 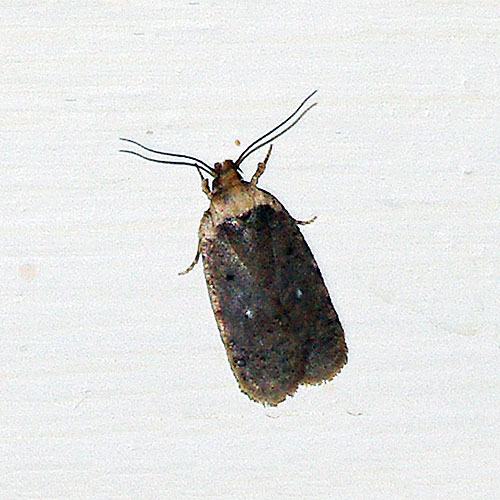 Meal moths are in the family Pyralidae (snout moths), one of the largest moth families in the order Lepidoptera with 1,100 mainly plant-loving species in North America north of the Rio Grande. The various meal moths tend to be small (maybe ½”), drab, ragged-looking moths. They can be seen flying across the kitchen during any season of the year. Successful? A typical female may lay 350 eggs that will hatch in 4 days into larvae that will feed for 7 to 10 days and then pupate for a week. Several references mention that the adults have a tympanum (hearing organ) on each side of their abdomen. There is no mention of the music Pyralids hear or the songs they sing.

Many of the destructive species of Pyralids have been carried worldwide in shipments of plant products. Their larvae eat stored plant materials including grains, cornmeal, and bird seed. Basically, if humans store it, some Pyralid eats it. They leave signs of their passage in the form of webs and unappetizing odors. The BugLady can personally testify to the larvae’s fondness for chocolate and for dried chili peppers (including some hot varieties). Control methods usually involve throwing away any potentially infested products and then storing target foods in the aforementioned plastic containers. Here in God’s country, an alternative treatment is the cold—putting grain products outside in sub-zero temperatures for 4 or 5 days will do the trick. In the BugLady’s experience, it may take years before the final moths are gone. 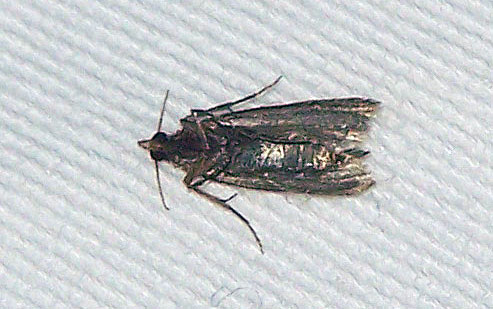 There are some “white sheep” in the family, too. Waldbauer, in The Handy Bug Answer Book, tells of the prickly pear cactus that was brought over to Australia in late 18th century and took off, covering, by 1925, 94,000 square miles (12 times the size of New Jersey) and rendering the land useless and impenetrable. By 1937, cactus-feeding insects, especially the caterpillar of an Argentinean Pyralid moth named Cactoblastis (You don’t believe the BugLady. Google it) destroyed the last dense stand.