Meadowhawk dragonflies dominate the airways from mid-summer through late fall. Taxonomically, they are found in the order Odonata (dragonflies and damselflies) and the skimmer family, Libelulidae. The BugLady likes to pretend that she can tell the difference between them, and happily labels and re-labels her Meadowhawk photos (some can only be identified “in the hand,” and photographs usually don’t adequately illustrate the “naughty-bits” that best distinguish species.). Feel free to disagree with her guesses, definitive identification may be well above the BugLady’s pay grade; even the White-faced Meadowhawks aren’t a slam-dunk. The excellent Beginner’s Guide to Dragonflies, by Nikula, Sones, Stokes and Stokes (great photos) says that some are so knotty to identify that the exact number of species is not really known. 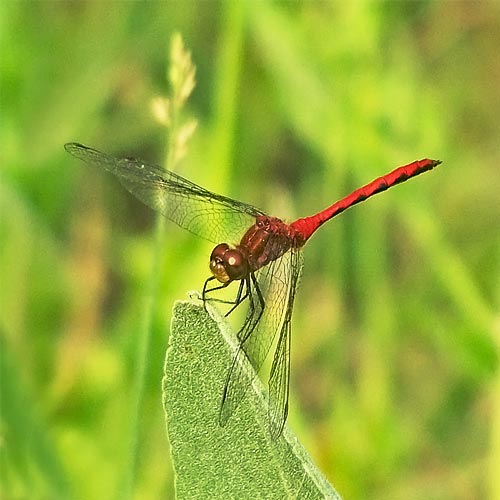 In general, Meadowhawks are common, colorful (but rarely “metallic”), a shade less than 1 ½ inches long, with red/yellow-orange abdomens and reddish/chestnut/rusty brown eyes. A few species are sexually dimorphic—the males and females are different colors. They like a variety of wetlands, though they are often found far from water. Meadowhawks tend to perch horizontally, often on the ground or on low vegetation, but some queue up in good numbers on telephone lines. 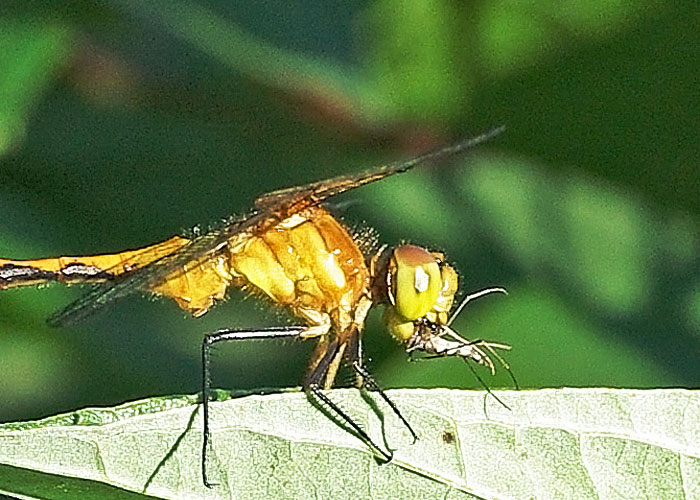 Despite our confusion, the dragonflies know who’s who, and females can generally be identified by the (male) company they keep. Dragonflies mate, often in mid-air, in a maneuver reminiscent of passing a baton. The male bends his abdomen forward and deposits a sperm packet in a chamber under his abdomen, just to the rear of his thorax. Then, as he uses the claspers on the tip of his abdomen to hold his mate around her neck, she uses the tip of her abdomen to retrieve the sperm packet. Some dragonflies accomplish this while in flight. According to Karl Legler in Common Dragonflies of Wisconsin (which has just been re-issued—contact the UW-Madison Arboretum) two Meadowhawks of different species may be in tandem, but they will not be able to mate because the “lock and key” mechanisms of their genitalia do not fit. They often lay eggs while flying in tandem.

Eggs laid in late summer enter diapause (a stage of arrested development that various insects use to survive part of their life cycle, usually in response to challenging weather). Eggs overwinter, hatch in spring, and the aquatic naiads live underwater for a few months before emerging (some northern species live as long as three years, and most of that is spent as a naiad). Last year’s egg becomes this year’s egg-maker. Although they practice Simple/Incomplete metamorphosis, dragonflies and damselflies undergo a fairly dramatic change in both appearance and habitat from naiad to adult. Their lives both below and above the water’s surface are spent as avid carnivores (and they target mosquitoes in both stages).

The BugLady is curious about a flying insect that has both a juvenile and an adult color phase. Insects don’t shed once they have wings (well, mayflies do), so a color change would have to be physiological. How do they do it, and what is the advantage of using that energy?

A Quick and Dirty Meadowhawk Summary:

References discuss a “White-faced/Cherry-faced/Ruby complex,” by which they mean that, alas for us, some of these field marks exist as part of a continuum, and there can be lots of “individual variation.” White-faced, Cherry-faced, and Ruby Meadowhawks all have black legs, conspicuous black triangles on sides of abdomen, and an amber patch at base of their wings.

Cherry-faced – 1.3” (S. internum)—Both sexes have a red face and bright red abdomen. The stigma (spot at tip of wing) is two-toned, lighter toward the outer edge. Veins at the leading edge of the wings are orange. July through September.

Yellow-legged/Autumn – 1.3” (S. vicinum) Males and adult females have red face and abdomen (black triangles small or absent), lower legs yellowish/dusky, not black, amber patch at base of wings. The stigma (spot at tip of wings) is two-toned red, lighter at each end, darker in the middle). Juveniles are orange-yellow. Late flight period—August, September, October.

Band-winged – 1.3” (Sympetrum semicinctum) Adults alike, red abdomen, with low, black triangles that form a “jagged line” on the abdomen, basal half (closest to body) of wings clouded w/yellow-brown (more on hind-wing). Juveniles are orange-yellow with a yellow-brown stain on basal wings. Relatively scarce.

Variegated – 1.5” (S. corruptum) Abdomen gray with top and segments outlined with red—“a complex mosaic of red, white and grayish-brown patches,”—pink veins on front of all wings.

In summary, the BugLady’s BugMom says, “If you say anything positively enough, people will believe you.” It’s worth a try. Or, you could just say “There goes a red Meadowhawk!”

And now, a short quiz: Now that you have memorized the Quick and Dirty Meadowhawk Summary, identify this dragonfly. 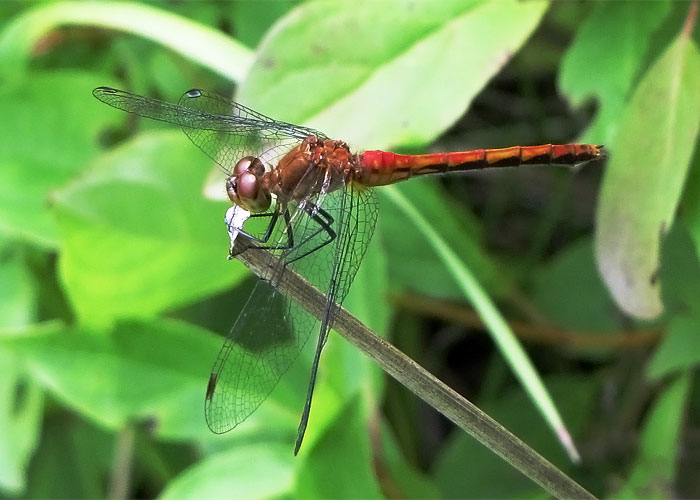 Honk If You Love Meadowhawks.