The BugLady’s usual sensory experience with grasshoppers is a small “tssssp” sound as they launch themselves out of her path and land on the undergrowth. So—it’s a good thing that the BugLady couldn’t see this well-camouflaged Meadow Grasshopper, frozen on the tree bark (the literature says that these grass-top-perchers are skittish and are more apt to take cover behind vegetation or to drop to the ground and then tiptoe away).

Meadow/Marsh Meadow/Short-winged Brown grasshoppers (Chorthippus curtipennis) are the only members of their genus in the Nearctic ecozone (North and South America); the other species members inhabit the Palearctic ecozone (a large chunk of the Old World). They are members of the Slant-faced/Tooth-legged grasshopper subfamily within the Short-horned grasshopper family, Acrididae. Bugguide.net describes their habitat as “tall grass in damp areas” from Alaska and Canada, throughout most of the Lower 48 except for the far Southeastern states (one source said that they are the most-widely distributed of our grasshoppers). They’re listed in a Key to Semi-Aquatic Orthoptera of Michigan; the BugLady didn’t find any mention in their biographies of interaction with water, only that they reside in periaquatic environments (“damp edge” situations that transition readily from aquatic to terrestrial and back). Here in God’s Country, they are out and about during the daytime throughout the summer and into fall. 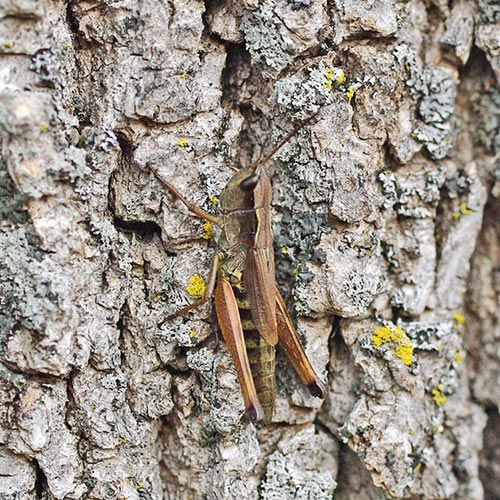 Meadow grasshoppers are brownish and typically have reddish/yellowish-brown femora (thighs) and black knees, and, yellow tibiae (shins). They have, as their name suggests, slanted faces. Like other members of their family, they have tympana (hearing organs) on the abdomen, near the attachment of the hind pair of legs. Males are about a half-inch long, and females are about an inch; the wings of most males are as long as their abdomen, but most females’ wings about three-quarters as long.

Unlike other species of grasshoppers that are polyphagous (feeding on a variety of plants). The BugLady is checking to make sure that there was no vocabulary lapse during the holidays. The Meadow Grasshopper is reputed to eat only grasses and sedges, although the very thorough biography published by the Wyoming Agricultural Experiment Station suggests that the grasshopper’s complete menu isn’t known and may include “forbs, pollen, fungi, and arthropod parts.” By itself, it’s not considered a crop pest, but it often feeds with the more damaging red-legged and clear-winged grasshoppers.

Meadow grasshoppers are eaten by the usual suspects—birds, coyotes, skunks, rodents, beetles, spiders, and more. They may have been among the grasshopper species historically eaten by American Indians on the Great Plains, too, and they are afflicted by parasitoid larvae of a number of flies.

When a young grasshopper’s fancy turns to love, he stridulates (makes sound by friction) from a grass blade, rasping his hind legs against his wings. If she is interested, she answers. Eggs are laid in fall, in egg pods, in a hole that she excavates in the soil with her ovipositor. The eggs enter a resting state called diapause (still checking) without hatching so that there are no energy demands from developing embryos, and (usually) the nymphs emerge late in the following spring. These hardy grasshoppers have developed an adaptation that allows them to survive in the tundra and in mountain meadows—in cold climates they get off to a really slow start, sometimes spending three years in the egg before hatching. Once hatched, they attain adulthood within a month.

Meadow grasshoppers are mostly homebodies, not venturing far from their natal fields. They are athletic jumpers, but while males can fly for about ten feet, the females’ shorter wings render them flightless. How do they expand into new territories? Most don’t. Only a small percent of meadow grasshoppers annually (about 2%) are equipped with extra-long wings and can initiate dispersal flights.

From the Canadian Geographic magazine’s “Fascinating Grasshopper Facts” we learn that a grasshopper’s mandibles (with which they chew from side to side) are so tough that “they are not damaged when the grasshopper is eaten by a burrowing owl. For example, when an owl eats 50 grasshoppers, almost the only grasshopper remains found in the pellet (which is coughed up by the owl after grinding and digesting the food) will be a few legs, 100 mandibles, and some other smaller grasshopper mouthparts.”