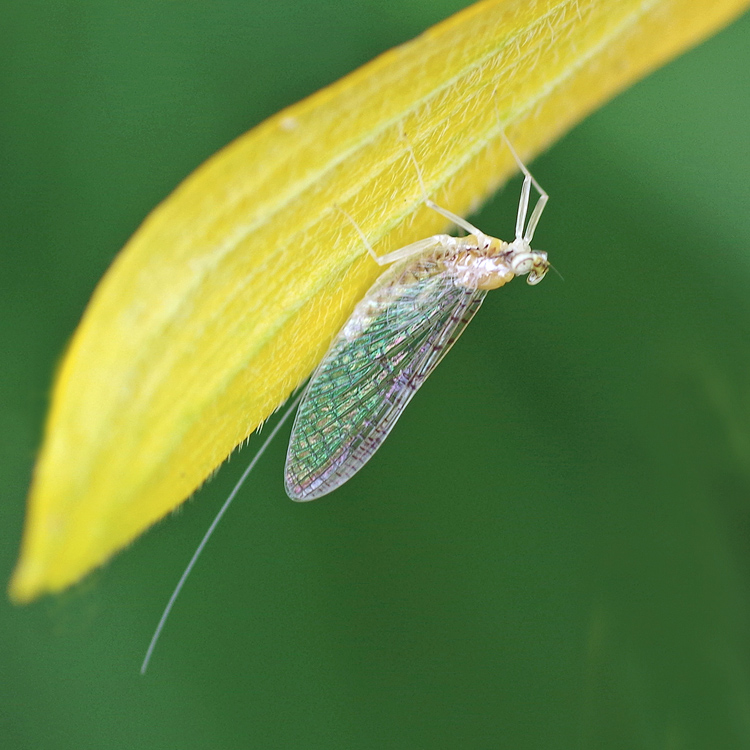 (Note: All links below are to external websites and leave the UWM website.)
Greetings, BugFans,

The BugLady thought it was time to give this episode from 2008 a make-over – many new words and pictures. 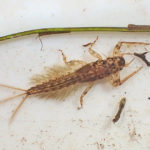 Mayflies, order Ephemeroptera (which means “short-lived wings”) are a large and complicated group, and because the BugLady has not learned the secret mayfly handshake yet, what follows is general information about the Order Ephemeroptera.  Mayflies are not related to house flies (order Diptera). They’re considered to have some primitive insect characteristics, and fossil evidence tells us that they’ve been around since the Carboniferous Age (354 to 290 million years ago). Sources list 611 species in 21 families in North America (you can see physical differences in some of the mayflies pictured) and 3,350 worldwide. 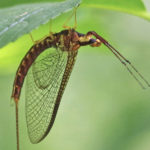 Mayflies, aka lakeflies, willowflies, fishflies (though there’s a fishfly in the unrelated order Neuroptera), or shadflies (like shadbush flowers, they’re conspicuous in spring when the shad fish are spawning) have an interesting life cycle. Immature mayflies (naiads) are aquatic, growing up in (mostly) well-oxygenated, unpolluted streams and rivers, though there are species that favor shallow, still water. Adults are usually found at the edges of their natal wetlands. Depending on their family, naiads live under rocks, on the stream bottom, in tunnels, or on decaying submerged vegetation, at specific depths, and within specific ranges of dissolved oxygen. They are classified by their modes of locomotion as clingers, burrowers, sprawlers, crawlers, climbers, and swimmers, and one source calls them “microhabitat specialists.” 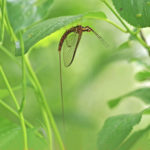 Most insects spend a disproportionate part of their lives as immatures, but mayflies take that to an extreme. Depending on water temperature and water quality, the egg stage can last as long as a year and the immature (naiad) stage for three years. Most adults live for three days, tops.
Although mayflies are most conspicuous in spring, some species are present in fall.  Like cicadas, they practice what the BugLady calls the “Normandy Beach strategy of reproduction” – if you throw enough soldiers onto the beach, some will reach the beachhead (or, in the case of the mayfly, live long enough to mate). At their appointed time, mayflies emerge from the water, often at dawn or dusk, by the googol (more about that in a sec). Males form dense, dancing clouds in the calm air (they are fragile) above the water. Females fly in and pair up, and copulation is brief. Males may dance again the next day. 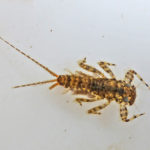 Female mayflies lay 500 to 3000 eggs, singly or in batches or all at once, placing them onto/under the water’s surface while in flight or from a perch on a rock, and some species crawl underwater to oviposit. The eggs sink to the bottom and go with the flow. Naiads are aquatic, living under water, feeding on algae and on tiny bits of organic debris delivered by the current (adults do not have functional mouthparts and do not feed – “ephemeral”). As they grow, naiads go through as many as two dozen molts (four times the number of molts that most insects with incomplete metamorphosis undertake). 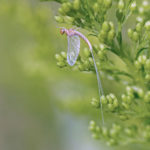 Although they have external gills along the sides of their abdomen (the gills of species that live in still water are larger), naiads can usually absorb sufficient oxygen through their exoskeleton in well-oxygenated waters. They use their gills to keep the water moving over their body, and this mini-current also delivers food. Gills are used in low-oxygen situations. 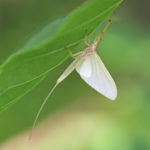 When it’s time to emerge as adults, they have an unusual penultimate step. The naiad swims to the surface or floats up on an air bubble (one source said that the naiad empties its abdomen of digested food, replaces it with air, and “becomes” the air bubble!). It swims to shore and molts into a smoky-winged, not-quite-reproductively-mature subadult phase called a “sub-imago” or “dun.” A few minutes to a few hours later, it molts again into the final, clear-winged adult stage called the “imago.” The imago has longer “tails” for increased stability in flight and longer legs to grasp its mate. For photos of molting sequence, visit this site.  Mayflies are the only insect that molts after reaching the winged, adult stage. 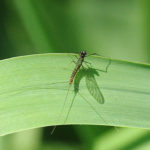 What can you mistake them for? Because they both fold their wings above their abdomen, adults might be confused with caddisflies, which also have aquatic immatures, but the wing shape is different. Mayfly naiads are similar to stonefly naiads, but mayflies almost always have three “tails.” Stoneflies have two tails, and a stonefly’s gills are on its thorax. 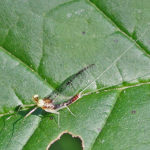 First, as eggs, naiads and adults, mayflies are important strands of food webs in and around the water. Eggs and naiads are a favorite food for other aquatic insects, snails, crayfish, leeches, and fish, and adults are eaten by birds, bats, dragonflies, spiders, frogs, and shrews. Since mayflies are relished by trout, fly fisherpeople (and bait manufacturers) go to a good deal of effort to keep track of what’s emerging and to tie flies that “match the hatch.”
Second, mayflies are sensitive to changes in water quality and are indicators of clean water. Like many other insects, their numbers are declining, most notably due to water pollution. 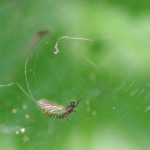 Finally, those dramatic, synchronized emergences of zillions of adults are cause for some lakeside and river communities to call in the snowplows in summer as the mayflies’ slippery bodies impair visibility and cover roads and bridge surfaces. Mayflies are totally harmless but some people are allergic to large quantities of mayfly bits.  See pictures at https://www.accuweather.com/en/weather-news/mayflies-swarm-lake-erie-as-summer-kicks-off/762324 and radar at https://www.michiganradio.org/post/massive-mayfly-swarm-seen-leaving-lake-erie-weather-radar (and what an amazing shot of a mass of newly-emerged mayflies on the water’s surface!).

Nice biography and pictures here, and another bio and postage stamp.
For a survey of mayfly families, visit here.
The BugLady has no experience with this site and is not endorsing it, but she was tickled to find some mayfly wear. 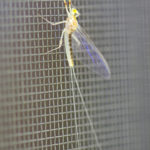 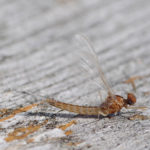 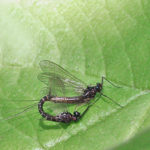