The BugLady spent a glorious afternoon on an ephemeral pond boardwalk recently, serenaded by frogs and suspended over zillions of pond dwellers who paddled or tumbled or jerked or glided or undulated below the water’s surface. Ephemeral ponds (EPs) are home to animals whose adaptations allow them to either withstand an annual dry spell or telescope their childhood so they are ready to leave when the pond disappears. The EP year starts at “ice-out,” with salamanders, peepers and the always-charismatic fairy shrimp plying the frigid waters. The cast of characters changes weekly as mosquito wigglers, wood frogs, water tigers, larval salamanders, water mites, caddis flies, fishing spiders and tadpoles wax and wane. A few EP mug shots follow.

Anyone who scoops for aquatic invertebrates gets land bugs in their basin occasionally, critters that were sitting on vegetation and got spooked or bumped into the water. Today’s BOTW, the less-than-an-inch-long marsh treader (MT), looks like it should be in that category, maybe like a very new walking stick. Not an aquatic insect in the sense that it lives under water, the MT dwells and feeds on the water’s surface—one of the “pond skaters.” MTs (Hydrometra martini) are true bugs (order Hemiptera) in the family Hydrometridae. Deceptively frail and spindly-looking, their deliberate, “measured” pace gives them their alternate name, “water measurer.” 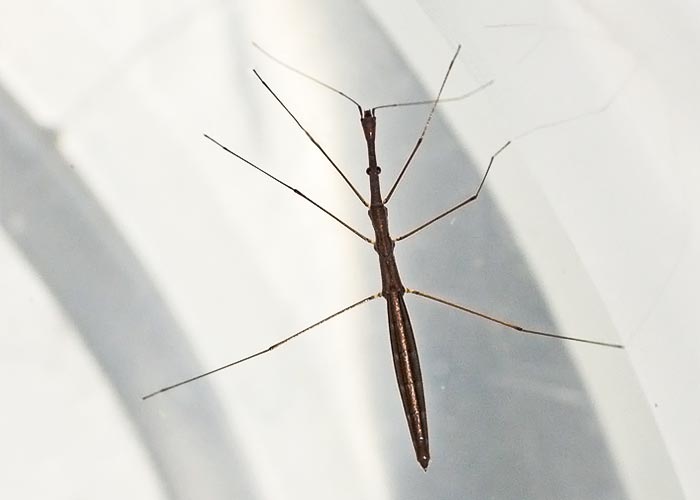 MTs like the quiet waters of marshes, swamps and ponds (and EPs) where they may be seen moving around the edges, hiking across the algae and duckweed mats, or walking on open water (they are capable of rapid movement when alarmed). MTs also live on damp sphagnum moss or moist rocks. They have been, as Monty Python once said, “creeping around on all sixes” for a long time–fossil Hydrometrids date back 110 million years.

All its body parts, from tip to tail, can be described by the word “slender.” Its eyes are the twin orbs located about halfway between the tip of its “nose” and the spot where the first set of legs is attached. Although it has claws at the ends of its tarsi (feet), an MT can walk on water without slicing through the surface film (that all-important, “sticky, top layer of H2O molecules). Most MTs are wingless here in the north, but southern MTs, even of the same species, are more likely to be winged.

Adult MTs spend winter on land, buried in debris around the edge of their pond. They emerge in spring to mate and lay eggs on plant stems, barely above the water’s surface. Egg-laying is an amazing feat. Mom first prepares the stem by dabbing a blob of gelatinous goo from her ovipositor (egg depositor) onto the chosen spot. Then she inserts her ovipositor into the goo, pushes a spindle-shaped egg into it, and pulls herself away, releasing the egg, and simultaneously gluing it down. Mom’s abdomen is about 6mm long, and each of the 150 or so eggs she will lay measures 2 ½ to 3mm. Now that’s an insect that’s serious about reproduction!

The kids hatch out a few weeks later, drop from their eggs onto the water’s surface and start looking for food. Considering their size and frail appearance, the carnivorous MTs have lusty appetites. Their menu includes smaller arthropods like mosquito wigglers and tumblers, midge larvae, springtails, and ostracods that live at or just below the water’s surface. Their newly-hatched siblings are fair game, and they also find (by scent) and scavenge dead or injured prey.

MTs don’t use their legs to capture their prey like their distant cousin, the water strider, does. The Proceedings of The Canadian Entomologist Vol. XXXVII, January 1905 tells us that “It feeds on insects that fall into the water and attacks them even before they cease to struggle. In the latter case it is extremely interesting to watch them stealthily approach their victim, extending and retracting their long beaks, retreating hastily at some sudden struggle of their prey, then once more resuming their cautious, slow approach until at length, when the struggles of their destined meal grow feeble, some bold one injects into it the deadly poison of the Hemiptera, stilling its motions, and the others then hasten to the feast. Several have been observed to fasten their beaks into one insect simultaneously.”

In his Fresh-water Invertebrates of the United States (1958), Pennak says that “The prey is… literally ‘harpooned’ with the tip of the beak and held thus while a pair of stylets are protruded farther into the body where they are moved about rapidly in the tissues like reamers while the fluids are sucked up.” And the Kansas University Science Bulletin from 1917 tells us that “the stylets are capable of tremendous exertion. When the tip of the beak has found its prey, the slender, flexible stylets are let out at unbelievable lengths in a search for a vulnerable place in the chitonous armor of a mosquito larva. The long head of Hydrometra is necessary to accommodate the play of those long spears.”

They just don’t write scientific prose like that any more.

A postscript for BugFans who can’t get enough of western thatch ants: