This picture takes a little explaining. One fine summer day, the BugLady saw a curious lump on a stalk of emergent vegetation offshore in a small lake, and she aimed her camera at it so she could see what was going on. Turns out, it was a dragonfly that had succumbed in the act of emerging as an adult, and there was a striped, reddish fly—a Marsh Fly—sitting on it. Cause and effect??

The Marsh Fly family (Sciomyzidae) is a small one, with fewer than 150 species occurring north of Mexico and about 600 species worldwide. Between “Marsh Fly” and their alternate name, “Snail-killing Fly,” we know where they live and what they do there (the Germans call them Schneckenfliege and the Dutch, slakkendoders). 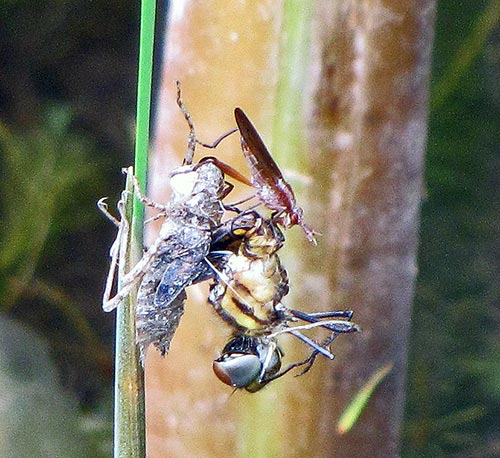 The unassuming adult Marsh Fly is found near the quiet waters of the marshes, ditches, lakes and ponds that its larvae call home, and it may be out-and-about in pretty chilly weather. MFs are considered “indicator species,” whose presence or absence informs us about water quality: they are very pollution-tolerant.

One field mark of the small, drab, adult MF is its distinctive, forward-extending antennae, and some have interestingly patterned wings. The cylindrical, tapered, lumpy MF offspring look much like Soldier fly larvae, of previous BOTW fame, floating near the water’s surface with a spiracular disc at one end (a breathing pore surrounded by non-wettable hairs) and a retracted head armed with mouth hooks at the other. For a picture of the larva, and be sure to click on the “Penny Picture.”

What are they doing in the water? MF larvae are predators or parasites or parasitoids on pulmonate (lunged, air-breathing) freshwater and terrestrial snails and slugs and/or their eggs. Ms. MF is a prolific egg-layer, mating and laying a few eggs daily for much of a month. Most species of MF target aquatic snails, placing their eggs directly on the host animal or in the host’s habitat. The larva enters the snail and, like the fox carried by the little Spartan boy, gnaws away. The larva’s curved shape allows it to fit within the snail’s shell, and it will pupate within the shell of a recently-deceased victim.

Not all species of MF have had their life histories charted yet, and a lot of what is known about them has been discovered by raising them in the lab (where they are fed minced snail parts). Why? In some parts of the world, snails carry diseases like leischmaniasis and schistosomiasis and are intermediate hosts for liver flukes that infest livestock and people. Because of their food habits, MFs have been introduced as biological controls on snails—presumably after asking the question “Do you have any native snail fauna that you’re particularly fond of?” The BugLady did read of an MF that was introduced into Hawaii, but only after it was determined that a beautiful arboreal snail would not be on the fly’s menu.

Adults feed on dew and nectar, and you can see one feeding at—http://www.youtube.com/watch?v=L0tqWr3LjZI (the term “vacuum cleaner mouthparts” applies).

MF courtship is low-key; one source labeled mating (which may last as long as several hours) as of the “assault” type. Counter-intuitively, the species with patterned wings tend not to use them in courtship displays, but some with plain wings, do. Species in the genus Sepedon may strut their stuff in a 180 degree arc around their Intended, flicking their wings as they go. Male MFs also offer a nuptial meal in the form of dead snail bits or of a secretion (which may come from his fore or his aft), depending on the species.

The BugLady thinks this fly is in the genus Sepedon, a widespread genus with 18 species in North America. Sepedon larvae are active predators, entering the shells of their prey, killing and feeding on them until satiated, and then moving on to their next victim. A growing larva may kill a dozen snails on its way to adulthood.

And the rest of the story? The BugLady consulted with a friendly wetlands ecologist (thanks, Mary) who told her that although little is known about the biology of many Marsh Flies, there is no evidence – yet – that the adults are predators. This fly might have been consuming dew/liquid from the dragonfly’s surface or just perching there.

MF enthusiasts please note, they have their own website Sciomyzidae.info.