Isn’t this moth exquisite! It’s one of several moths in the family Geometridae that go by the same name – Maple Spanworm (more about that in a future episode). And it’s one of several “new bugs” that the BugLady saw for the first time this year. Here’s a glamor shot of one. 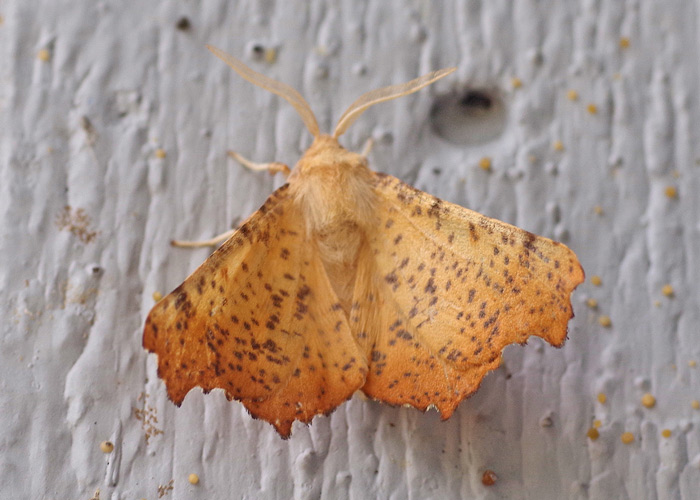 Several sources said that Maple spanworms (Ennomos magnaria) are a sign that the days of summer are numbered (the BugLady found two of them at the start of September). They’re found around woodlots and swamps across southern Canada and the northern half of the US. Adults are nocturnal, and may rest on the sides of buildings by day. 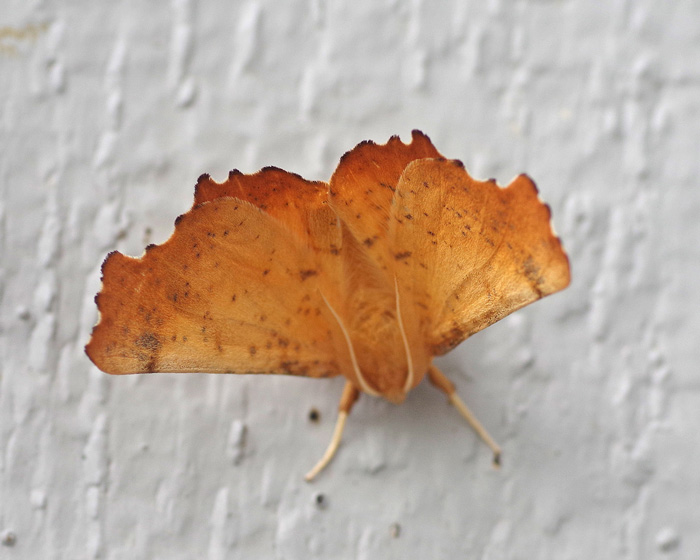 With a wingspan of 1 ¾” to 2 ¼” they’re decent-sized moths. What cool wings! Their unevenly-scalloped edges explain this moth’s other common names – Notch-wing moth and Notched-wing geometer. What a dynamite color! And what a posture – like one of those figure-skating moves where the skater holds her foot in back of her head! There are plenty of moths that are leaf mimics, but this one takes it to another level by imitating dry, curled leaves.

David James, et al, in The Book of Caterpillars: A Life-Size Guide to Six Hundred Species from around the World, tell us that:

“Maple spanworm caterpillars hatch from overwintering eggs laid in rows on their host plant. Both edible and abundant, the caterpillars have evolved a remarkable ability to camouflage themselves. So as not to create a searchable pattern for predators, the green, brown, or gray coloring of their body varies, and they also blend perfectly with their host plant by assuming a stiff, twiglike position during the day.”

The BugLady assumes that “edible,” here, means edible by the usual caterpillar-eating suspects, not in an entomophagy context. Jim Sogaard, in Moths and Caterpillars of the North Woods, says that the caterpillars are “superb examples of ‘vegetable disguise.’” Despite their camouflage, they are found and eaten by birds and by other insects and are parasitized by wasps. 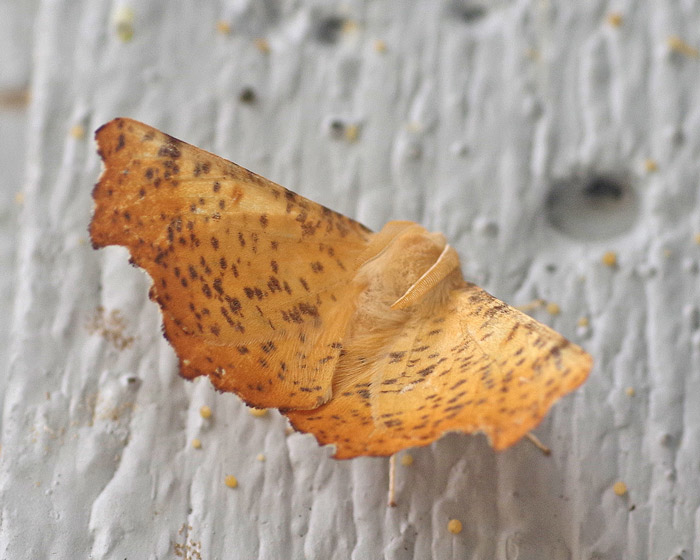 One source pointed out that the name “Maple spanworm” is misleading because it implies that the caterpillar is a specialist feeder on maples. In truth, its menu is so varied that its host plants include much of what grows in Wisconsin’s deciduous woods and wetlands – alder, ash, basswood, elm, hickory, birch, beech, poplar, willow, holly, and oak – and maple.

In fall, females lay eggs on a host plant, and there the eggs overwinter. They hatch in spring and the caterpillars feed, but instead of descending and pupating on/in the ground, they spin a silken cocoon in the leaves and pupate there, emerging as adults in mid-to-late summer. 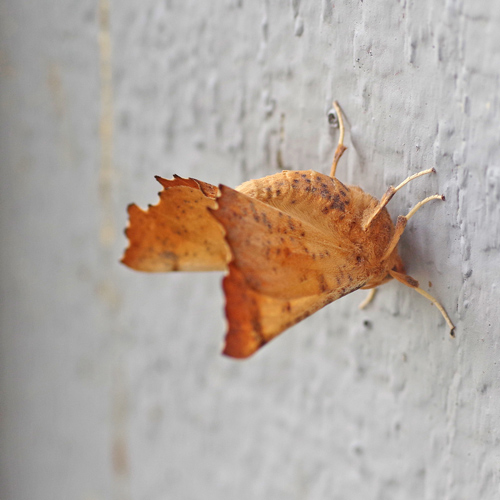 Of the caterpillar, David Wagner says in his book Caterpillars of Eastern North America, that “By flashlight, these enormous loopers are readily discovered – look for them at the end of a shoot.”

On a different topic, it’s Woolly Bear Caterpillar Time! To find out what they’re telling us about the coming winter, see this previous BOTW post.