Another week, another Maple Spanworm. This one, the Large Maple Spanworm (Prochoerodes lineola) is also in the family Geometridae. The BugLady didn’t have to play her usual game of Identification Roulette because, of the seven New World species in this primarily tropical genus, this is the only one that occurs in eastern North America. 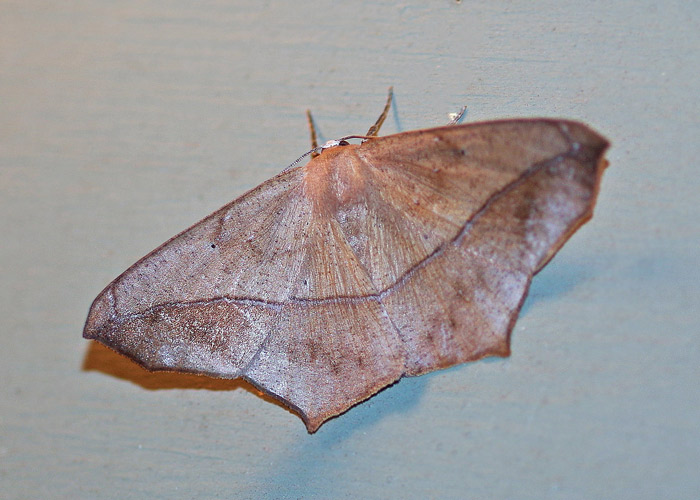 Like last week’s Maple spanworm (Ennomos magnaria), the adult is a fall-flying, nocturnal leaf mimic, and the caterpillar is cleverly disguised as a twig (here’s a “frosted” and an “unfrosted” version of the caterpillar). It’s a nice-sized moth, about 1 ½” to 2” across, with a few small points on the edges of the wings. There’s a lot of variation in color, but the dark line that bisects the front wing (the post-medial line) is diagnostic; it has pale edges and a sharp angle near the tip of the wing.

Wagner, in Caterpillars of Eastern North America, tells us that “Seasonal phenology remains unclarified in the Northeast, where there seems to be a single principal generation, with mature caterpillars from June through August; southward with two to three generations.” Both Wagner and Sogaard, in Moths and Caterpillars of the North Woods, say that it overwinters as an egg, but other sources say that it overwinters as pupa. Here’s a nice series of pictures of its life cycle.

A publication by the North Carolina Parks Department says “We suspect that few individuals overwinter in North Carolina and that we get annual migrations in the spring that are able to establish temporary, but recurrent breeding populations throughout the state.” The 2018 “Checklist of Wisconsin Moths” (Ferge, Balogh and Johnson), though, lists it as a resident here.

Like last week’s Maple spanworm, the caterpillar does not limit its diet to maple; it’s also found on woody plants like birch, willow, tamarack, aspen, blueberry, cherry, and dogwood, and on herbaceous plants like soybeans, sweet-fern, and members of the geranium family. 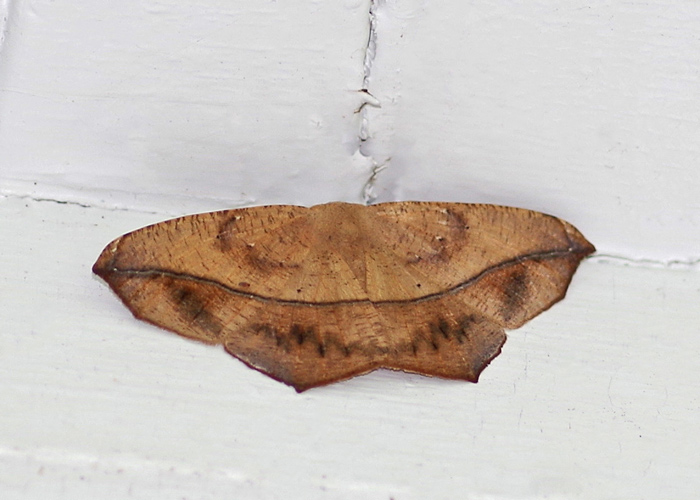 The Large maple spanworm was one of a number of moths studied by researchers Amanda Soutar and James Fullard in an effort to find out more about how moths avoid predators at night. They say that:

[An Aside: From an article called “Seven Surprising Facts about Moths I Learned on my First Mothing Night,” “Fact #1 – The names are in Latin! When Peterson’s Field Guide to Moths was authored with Charles Covell in 1984, the publisher told him he needed to include the common names. Peterson said that there were no common names! He was then told to make them up, which he did using the Latin to help with some of the naming. The problem with learning only the common names is that others have also named them something completely different.”]

Finally, Maple spanworm seems to be a popular name – there’s also a Lesser maple spanworm (Macaria pustularia) (which the BugLady doesn’t have a picture of – yet); about its descriptive species name, bugguide.net says “PUSTULARIA: from the Latin ‘pustulare’ (to blister); the third orangish-yellow marking along the forewing costa [representing the top of the PM line] is reminiscent of a pustule that has broken and leaked a trail of pus down the wing – not a very nice mental image, but a good way to remember this species.”