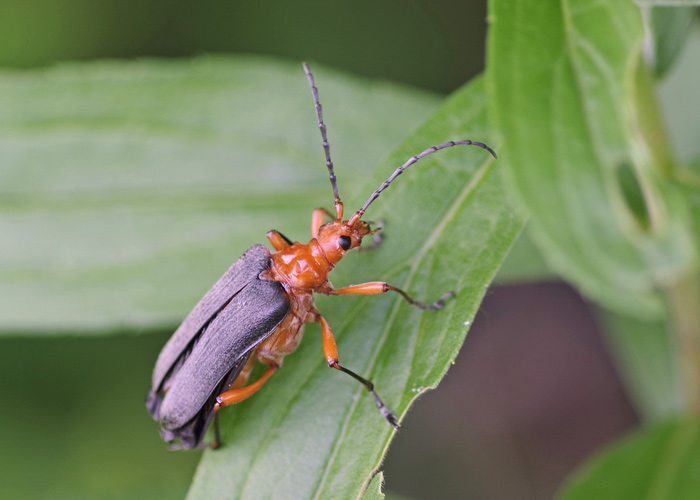 The BugLady is always excited when she finds an insect she’s never seen before – even more so when it’s a giant, orange and gray “Holy S@#&!” beetle.

She was moseying along the trail at Riveredge Nature Center at the beginning of July when she saw a flash of orange in the vegetation. A big flash. She craned and fidgeted and crossed her fingers while the beetle crawled around, revealing itself by degrees. After posing for a few shots, it flew out noisily and landed on her jeans for a second, and then moved on.

It’s a spectacular beetle, (Dr. John Hamilton, writing in The Canadian Entomologist in 1885 says that “this appears to be a rare Cerambyan, and among the choicer.”), but there’s not much information out there about it (it is big enough and beautiful enough, but apparently, it’s not bad enough to warrant attention).

To put it in context – with about 390,000 species (25,000-plus in North America), beetles (order Coleoptera) are the largest order in the whole
animal kingdom, not just in the Class Insecta. Long-horned beetles (family Cerambycidae), those darlings of the beetle world (because of their striking antennae as well as their flashy, varied colors including blue, yellow, and orange), number about 30,000 species worldwide with only about 1,000 in North America. The MLHB is in the Flower longhorn subfamily Lepturinae, a group of sometimes-dramatically-wedge-shaped longhorns that hang out on flower tops by day. There are a dozen species in the genus Stenocorus in North America – more elsewhere.


At 1 ¼” the Majestic long-horned beetle (Stenocorus schaumii) is indeed majestic. It comes in two colors and some are more chiseled than others (the BugLady’s MLHB was not svelte), and females are notably larger than males. It is mostly eastern-ish – bugguide.net says New Brunswick to North Carolina to Manitoba to Oklahoma. A number of the search hits were from eastern Canada, in French.

Cerambycid larvae are vegetarians; some are pests of living plants, some feed inside dead or dying wood, and the interests of many do not collide with ours. MLHB larvae feed/develop in ash, beech, maple, serviceberry, and other hardwoods, and the adults eat nectar and pollen. 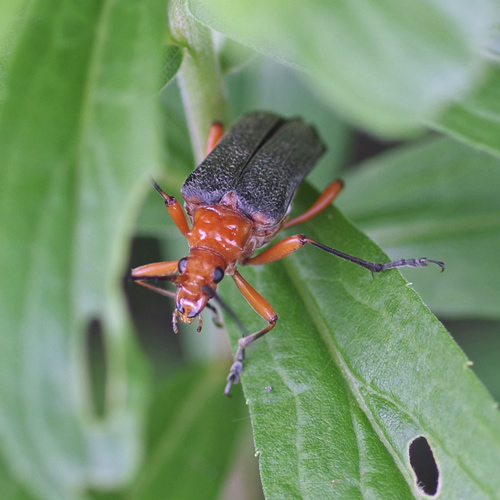 The MLHB was described by LeConte and is one of several insects named for German entomologist Hermann Rudolf Schaum, a go-to guy for all-things beetle in the mid-1800’s, who wrote and corresponded prolifically with American entomologists. Schaum apparently believed that the Continent should be the clearinghouse for insect classification. In a history of American entomology called Brethren of the Net: American Entomology, 1840-1880, author Willis Conner Sorenson tells us that:

Schaum…..objected to the notion that ‘American insects ought to be described by American entomologists.’ The result, he said, had been the proliferation of isolated descriptions, a practice that had been characterized by Schaum’s colleague Erichson, as ‘the nuisance of science.’ Schaum regretted that American entomologists had added to this nuisance.

And Now for Something a Little Different - Slime Molds