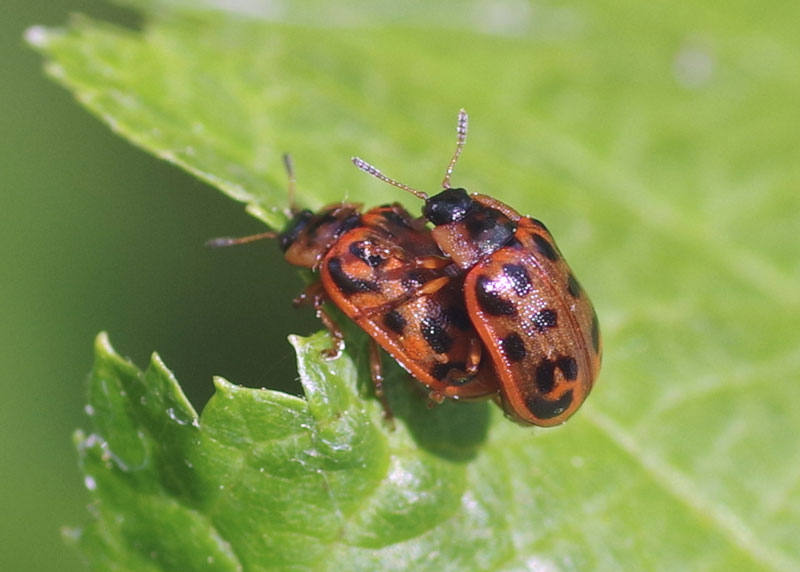 (Note: All links in this article go to external sites.)

The BugLady found these (preoccupied) beetles on a trip to Spruce Lake Bog in June. They’re in the Leaf beetle family, Chrysomelidae, which, along with weevils and rove beetles, is one of the largest beetle families. According to bugguide.net, there are “about 35,000 described species and up to 60,000 estimated species worldwide and ca. 1900 valid species and subspecies in our area.” Chrysomelids are vegetarians, often targeting specific plants and, like the asparagus, the waterlily, the Colorado potato, and the ninebark leaf beetles, are named for their culinary preferences. Adults are usually found on leaves and flowers, and the larvae are found on leaves, roots and rhizomes. Some are agricultural pests, and some are biological controls of agricultural pests. They’re found on six continents.

[Quick entomological review: In species that have Complete metamorphosis—egg to immature to pupal/resting stage to adult—the immature stage is called a larva. The larvae of certain groups have additional names like grubs (beetles) or maggots (flies) or caterpillars (butterflies and moths). The BugLady was taught (eons ago) that the immatures of insects with Incomplete metamorphosis (they hatch, grow, molt, and add features like wings until they molt into adults ) are called nymphs if they develop on land and naiads if they develop in the water. Some people use nymph interchangeably with naiad (never the other way around), but a nymph/naiad should never be called a larva. Got it?]

The majority of leaf beetle species have only one generation per year and overwinter as adults; otherwise, in size, shape, coloring, habitat preferences, and lifestyle, it’s a very diverse bunch. Some are pretty spiffy:

Others are less glamorous:

Despite their numbers and ubiquity, there’s still a lot we don’t know about many of the Chrysomelids.

The BugLady couldn’t find much about this little beetle. It’s in the genus Chrysomela, which includes 17 species in North America, and they concentrate on willow, poplar, and alder. About identification to species, S.M. Clark on bugguide.net says, “Species determination in this genus is difficult. Confident identification often requires long series of specimens, viewing of the ventral areas, and especially knowledge of the host plant.”  So, it’s a variable species both in color and spottiness, and a “series” of correctly identified beetles would show the transitions from pale to dark, and from small spots to large.

The BugLady is going out on her well-worn limb and guessing that her beetles are Maine leaf beetles (Chrysomela mainensis), which feed on willow and alder.  Pictures of Maine leaf beetles on bugguide.net come from the northeastern North America (New Jersey to New England to New Brunswick), from northwestern North America (Oregon to Alberta to Alaska), and from Minnesota, Wisconsin, Michigan, Pennsylvania, and California.

Here are a bunch of larvae on alder, the larva of another member of Chrysomela that is possibly deploying a defensive chemical, and here is a newly-emerged adult with its pupal case.

A Shout out to the Alaska Guide Company, for posting this message on its Chrysomela mainensis page: “We’re sorry, but a bear ate this photo. We’ll find a replacement soon-(ish), maybe, we’re working on it.”

(The BugLady gives thanks for bugguide.net)