There are about 11,000 species of moths in North America, and many of them fit the birders’ all-purpose acronym for sparrows and other small, songbirds – “LBJ” – for “Little Brown Job.” The moths in today’s collection are anything but anonymous in appearance, though apparently, they aren’t good enough or bad enough or charismatic enough to have been studied much, so life history details are scanty. 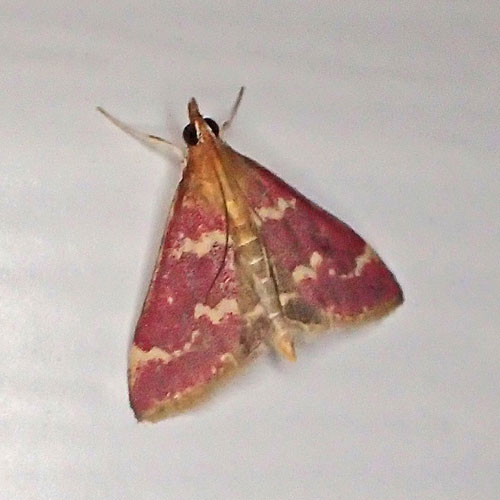 The Raspberry Pyrausta (Pyrausta signatalis), in the snout moth family Crambidae, was named not because it feeds on raspberries but because of its color – what a lovely creature! It’s found in grasslands and edges from Arizona to the Carolinas, north across southern Canada, wherever its larval food plants are found (and on the BugLady’s front porch). Its wingspread is about three-quarters of an inch.

An alternate name is the Raspberry mint Pyrausta because its main host plant in the western part of its range is horsemint, and it eats wild bergamot in the east. Its larvae can be rosy, too (see BugGuide images: Image1, Image2)

Inexplicably, it shows up (by scientific and common name) in a book called The Fauna of British India: Including Ceylon and Burma, Volume 4, Part 4 (1896). 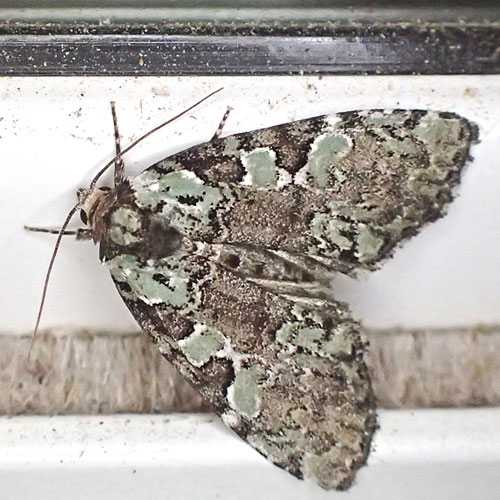 THE Marbled green Leuconycta (Leuconycta lepidula) (a.k.a. the Marbled-green Jaspida and the Dark Leuconycta) is a moderate-sized moth (wingspan about 1 ¼”) in the Owlet moth family Noctuidae. It’s a nifty lichen mimic with lots of variation within the species – as shown. It’s found in North America from the Rockies to the Atlantic in the same habitat as the Raspberry Pyrausta (and on the BugLady’s front porch).

Caterpillars as shown on the page, feed on dock and on one of the BugLady’s favorite flowers, the dandelion. 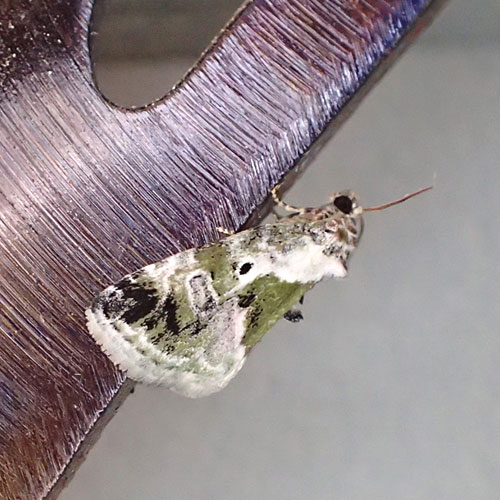 The Black-dotted Glyph (Maliattha synochitis), a.k.a the Black-dotted Maliattha and the Brass-dotted Grass Moth, is also an Owlet moth, one of two species in its genus in North America. It’s doing a pretty good imitation of a bird-dropping.

According to BugGuide, the historical range of the Black-dotted Glyph is mostly in the US from the Great Plains, eastward (including the BugLady’s front porch), but in the past few decades it has moved into southern Canada. Most sources list the host plants as smartweeds (genus Polygonum), but the Owlet Caterpillars of Eastern North America says it eats grasses, including crabgrass. Both could be true. There’s lots of variation in the color of the adults: check link. 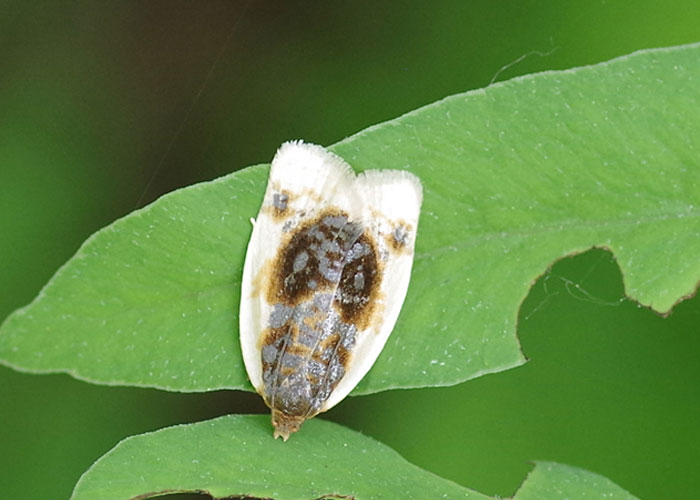 Caterpillars (check Moth photographers group’s page and bugGuide’s page) feed on spring wildflowers like cohosh, trillium, and Solomon’s seal in deciduous woods. They roll up a leaf and web it together from the inside, and then they crawl out of their tube and feed on neighboring leaves. One source lists them as eating witch hazel, several alder species and meadowsweet along with the wildflowers. They may overwinter as larvae. 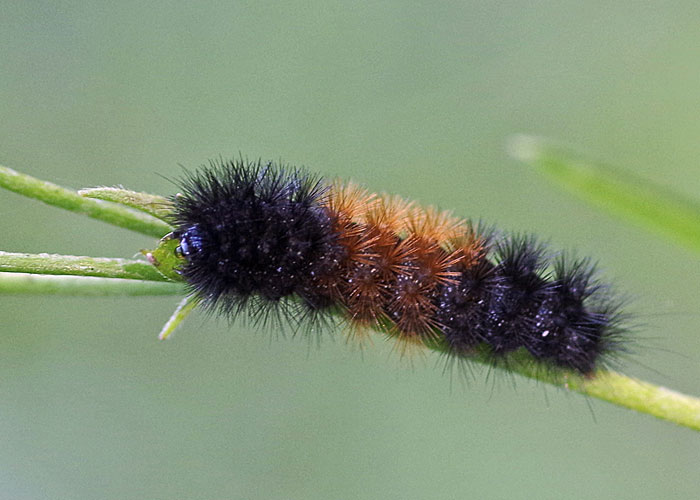 Wooly bear caterpillars are crossing the road, presumably with no other philosophical agenda than getting to the other side. Read their story on post.