The Giant Silk Moths are magic. Some have spectacular markings, and they can be huge, with wingspreads close to six inches. There has never been a successful silk moth industry in North America, and one of the people who tried, imported a potential silk-maker called the gypsy moth to be the cornerstone of his business (ironically—or predictably—the tachinid flies that were imported to control the now well established gypsy moths take quite a toll on our native silkworms, whose numbers plummeted as tachinids were introduced).

But it’s hard to think of all that when you’re looking at a creature as exquisite as this Luna moth (Actias luna). It has a wingspread of about four-and-a-half inches. The lime-green wings are somewhat transparent—you can just see an eyespot on the lower right wing through the upper wing. Some sources say that the “trim” on the Luna is pink in the South and yellowish up north, but like this one, the Luna in Sogaard’s Moths and Caterpillars of the North Woods has a dark pink leading edge on the forewing and a pink border on the wing edges. 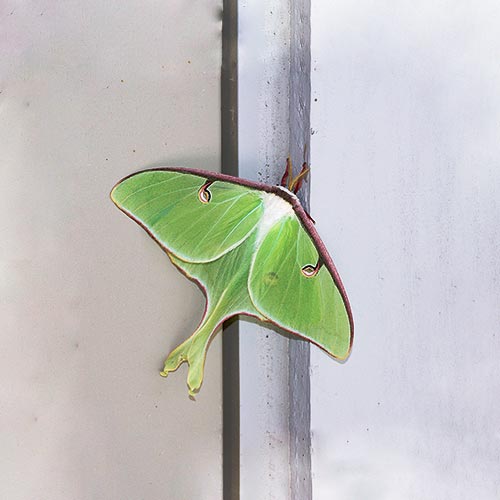 The BugLady thinks this is a female. Female silk moths (family Saturniidae) signal their availability by releasing perfumes called pheromones into the night air, and males pick up the scent with their larger, feathery antennae. They can detect just a few pheromone molecules from miles away. Silk moths also have “ears” that allow them to hear the clicks of hunting bats.

Sogaard says that the adults’ emergence is choreographed by increasing day length – photoperiod. A portion of the pupal case is transparent – it has a mini “sun roof” that allows it to monitor the light.

The BugLady posted an episode about the silk moths on July 2, 2008. It’s archived at the UWM Field Station website.