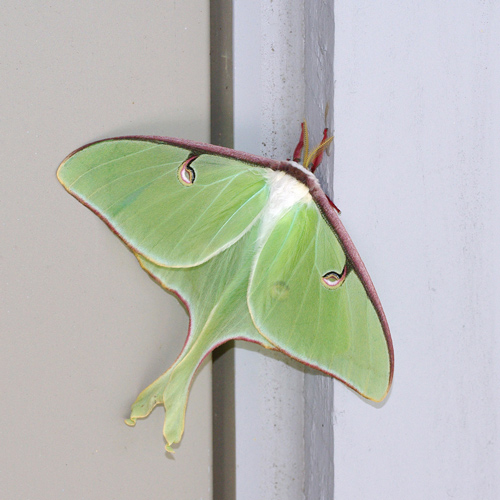 The BugLady’s favorite insect is the Tiger Swallowtail (Mom likes me best), but in the crowded field for second place, the Luna Moth is pretty close to the top.

Luna moths (Actias luna) are in the Giant Silkworm/Royal Moth family Saturnidae (of previous BOTW fame), whose family members have ringed eyespots reminiscent of Saturn. The LM’s name came from eyespots that resemble moons (eyespots that make predators ponder whether their target might be different than they originally thought). Actias is a small genus with about two dozen species worldwide, and the LM is the only American species. They are found in wooded areas east of the Great Plains (on rare occasions, LMs have made their way to Europe). 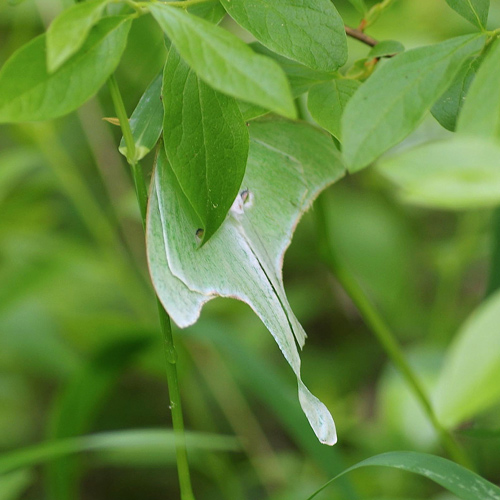 Warming weather signals them to emerge from their cocoons, which they accomplish with the aid of an enzyme (named cocoonase!!) that they secrete to soften the dried silk and of a hard spur at the base of each front wing, which they use to break through it; here’s a YouTube video and of an LM eclosing (emerging), and some still shots. Then they pump up their wings and begin their short lives as adults. Females emit a pheromone that calls males to her perch. His feathery antennae allow him to sense a mere handful of scent molecules from two or more miles away and to follow the increasingly concentrated scent trail to her. Lunas are nocturnal, and most mating occurs after midnight.

Adults have neither mouth nor gut, and they live only about a week, dying soon after they reproduce. There is one brood per year here in God’s Country, and two or three in the south.

Females lay between 200 and 400 eggs, singly and in clumps, on host plants. LM caterpillars feed on the leaves of birch, hickory, walnut, maple, and sumac, and add sweet gum, pecan, and persimmon in the south (they aren’t considered forest pests). They show regional favoritism – LMs in our area prefer birch and do badly if moved to a different food plant. One theory is that LM caterpillars are capable of processing the defense chemicals produced by their host trees, and they may become specialists in detoxifying a particular species. Young caterpillars are knobbier than older ones. 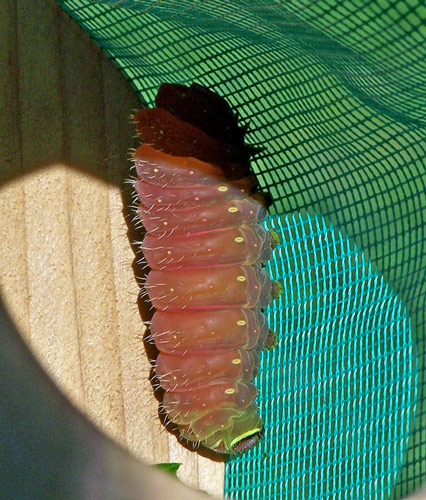 Mature caterpillars become dark red before pupating; they drop to the ground and use silk to wrap themselves in a leaf for the winter, camouflaged in the litter of the forest floor. LM pupae are not passive – if they are disturbed, they will move noisily within their cocoon. Jim Sogaard, writing in “Moths and Caterpillars of the North Woods” tells us that “The pupa has a clear ‘window’ through which even dim light can stimulate the brain. Photoperiod likely contributes to breaking diapause [the suspended animation of winter]. If a cocoon is moved, the pupa within may noisily reorient itself to the light.” Here’s a nice stage-by-stage series.

A two inch long LM caterpillar looks like a feast for any predator that finds it despite its green camouflage, but the caterpillar has a bag of tricks that includes rearing up on its back legs, warning its would-be attacker by making clicking sounds with its mandibles, and then regurgitating the noxious contents of its intestine. 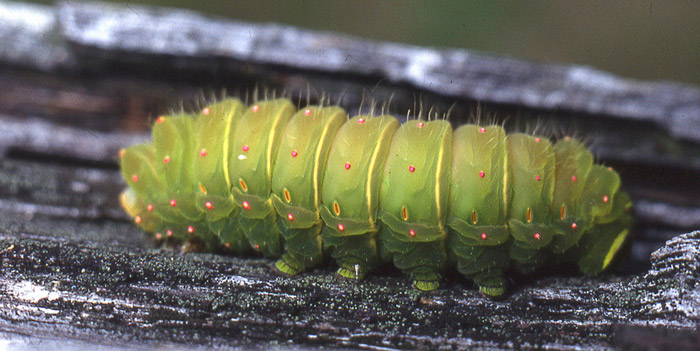 LMs are not common, and they are becoming less so. Their natural predators include bats, owls (one source told of a Screech Owl that fed on males that came to visit a female calling from a branch), spiders, and toads.

Fun Luna Moth Fact – a bunch of butterflies have been featured on US postage stamps, but in 1987, the LM became the only moth (before or since) to be so honored.

Look for them in the month of June.

To paraphrase the Bard, “O brave new world, that has such creatures in’t!”