In his wonderful book,Caterpillars of Eastern North America, Wagner says that “Whether measured in term of abundance or biomass, loopers are among the most important Lepidopterans in Eastern North America. They are an especially important component of the spring caterpillar fauna of deciduous forests, where they are the staple in the diets of many forest-nesting birds. They are masters of crypsis, providing many of nature’s most marvelous examples of background matching, mimicking a myriad of plant tissues and organs. …Among their ranks are several outbreak species, whose populations occasionally defoliate large tracts of forest”.

Loopers are moths in the family Geometridae, brethren of the inchworms, cankerworms, and spanworms (and Emeralds, of previous BOTW fame). The family Noctuidae—the cutworms, owlets and underwings—also contains an unrelated group of moths called loopers in the subfamily Plusiinae, another example of confusing common names. As a group, Geometrids lay their often-brightly-colored eggs in bunches. However colorful their eggs may be, the caterpillars of Geometrid loopers are well-camouflaged, and many imitate twigs, bark or buds. They have a few pairs of legs on the thorax but have only two pairs of prolegs toward the rear of the abdomen instead of the usual three or four. The gap makes them “loop” or “inch” instead of crawling or undulating as they perambulate (see the leg arrangement on the Linden Looper caterpillar). They really get around, though, often parasailing on silken webs. Most Geometrids overwinter as pupae. As a group, their caterpillars are not picky eaters.

The Greater and the Lesser Grapevine Loopers (Eulithis gracilineata and E. diversilineata) live in suburban, rural, and wooded areas in eastern North America. Although the caterpillars are quite distinct, adults can be the very devil to differentiate; websites stress that there is a lot of variation and overlap within each species and that they can’t be told apart simply by photos. Nonetheless, the BugLady is going to tread where angels fear to and call this one a Lesser Grapevine Looper (LGL). 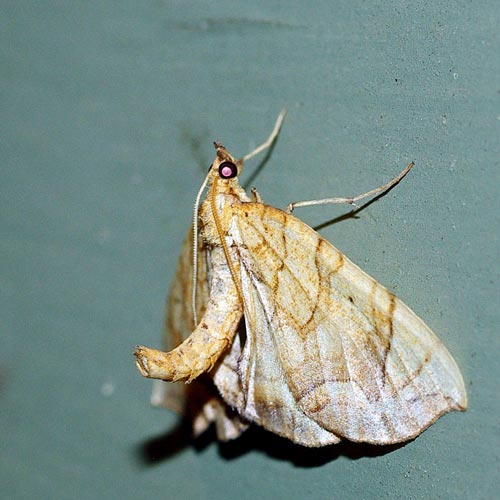 As the name suggests, the caterpillars of LGLs (and GGLs) feed on the leaves of plants in the grape family, like wild grape and Virginia Creeper, and they can be a “minor pest” in vineyards. The BugLady predicts that grape-feeding insects will increase and multiply in coming years. The common wisdom has always been that our cold, northern winters would prevent wild grape from accomplishing the massive takeovers that some southern vines do, but with the milder winters of the past 10 years, wild grape has put an increasing strangle-hold on trees and shrubs here in God’s Country.

The twig-like caterpillars feed for about two months before spinning a web on their host plant and pupating within. LGLs overwinter as eggs laid by the adults in mid-summer. The BugLady photographed adult LGLs on her house in mid-September of 2011 and in mid-July of 2012.

A number of sources exclaim about odd posture of the LGL and GGL, but no one explains it. It probably confuses predators.

The caterpillars of Linden/Basswood Loopers (Erannis tiliaria) (Tilia is the genus name of the Basswood tree) do not restrict their feeding to that species; they are equally at home on many woodland and edge trees and shrubs like maple, beech, birch, various poplars and willows, oak, choke cherry, apple and hickory. They are skeletonizers that leave only the leaf’s midrib and veins in their wake. One website showed a photo of a bunch of alleged LL larvae feeding together within a web that was spun around a branch, like fall webworms, but the BugLady isn’t so sure about that. 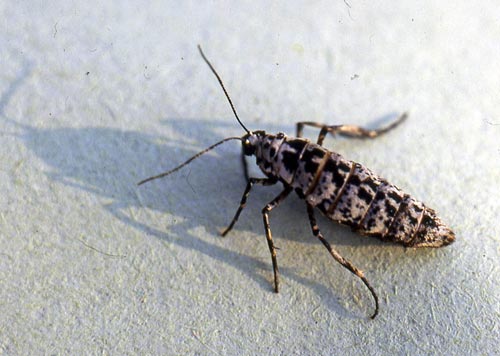 LLs have a really late flight period—well into the end of October and beyond. For this reason, they are also called Winter Moths (but that name already belongs to the Eurasian Geometrid Operophtera brumata, which has made itself at home on our shores and which, in some years, is a significant defoliator in parts of Northeast and Northwest). The LL is found in woodlands, mostly east of the Rockies, as far south as the southern tier of states.

LL’s have put an interesting spin on the usual Geometrid lifestyle. Like some other species in the family, especially those with a fall flight period, adult females are wingless and therefore flightless. Where the females are said to mimic mottled, lichen-covered bark, the drab males look like dead leaves. The female emerges from her pupal case in the ground in late fall, climbs up a nearby tree and, as one source puts it, “calls to” the males (using chemical “scents” called pheromones). After they mate, she lays her eggs in cracks in the tree bark; there is a single generation per year. On one important detail of the life cycle, the scribes disagree. Some say that LLs overwinter as eggs and that caterpillars feeding in spring and early summer can cause defoliation problems during a “boom” year. Equally reliable sources say that LLs overwinter tucked into their pupal cases about an inch below the surface of the ground (which would add up to a very long pupal stage if they are active in fall, and then what/when would the caterpillars be eating?). At any rate, the males are very cold-tolerant, defying the rules of cold-bloodedness, able to fly when temperatures hover around freezing.

So, BugFans, there are still insects out there on the landscape. Go outside. Find some.