Consider, in this run-up to the Solstice (which we should all celebrate like crazy since it means we can start enjoying tiny bits of brand new daylight), consider these gorgeous, unfinished critters (What child is this?). Beautiful caterpillars that grow up to be admirable-looking adults (none of which the BugLady has seen, unless she has a picture of the Lithacodia somewhere in her X-Files). All three of these species have similar ranges east of the Rockies, and the adults of all three can be seen in mid-summer through fall.

The species name of the Banded Tussosk Moth (Halysidota tessellaris) comes from the Latin tessella, which refers to a mosaic pattern made of small, square stones, as illustrated by the wing patterns of the adults. A “tussock” is a tuft or clump, and the caterpillar wears a few of those. The elegant gray of the tufted larva is called “dirty tan” by some moth describers (what a grim Crayola box!). 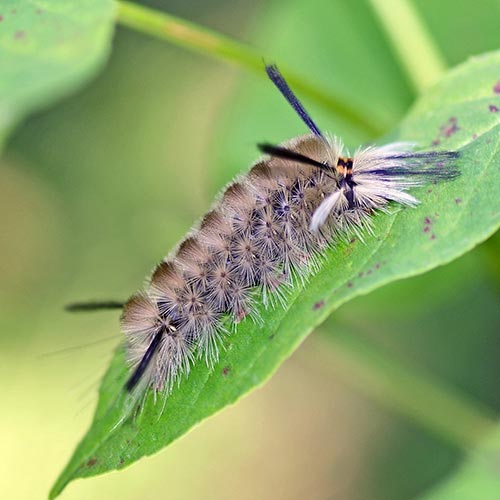 Banded Tussock Moths are in the moth family Erebidae, which includes, among others, the tussock and underwing moths. Like many of the tussock moths, the caterpillars are seen in late summer and fall. Caterpillars feed on trees and shrubs like ash, birch, oak, poplar, walnut, grape, and willow. They feed openly, which suggests to observers that although the caterpillars are not flashily (aposematically) colored, they are off-putting in some way. For the Banded tussock moth, make that two ways. According to Sogaard, in Moths and Their Caterpillars of the North Woods, adult females “gather pyrrolizidine alkaloids from decaying plant sources like asters, joe-pye weeds and ragworts [one source says that females regurgitate on decomposing target plants and then lap up the fluids in order to ingest the alkaloids] for purposes of defense and/or pheromone production. This is known as pharmacophagy. The hairiness of the caterpillar likely provides defense against predators [not many birds appreciate a beak-ful of hairs, though some, like cuckoos, are OK with it, and BugFans probably won’t get in trouble for petting one]. Caterpillars eat their shed skins, hairs included, possibly to retain the defensive pyrrolizidine alkaloids.” Apparently, Mom’s scavenging benefits her, and she passes it along.

Enjoy these Bug Life Cycle shots while you can still find them—apparently, the site’s author is dismantling it, and while she is sending her lovely bug life cycles to Bugguide.net, they will be lost in the gazillion other pictures stored there.

The BugLady gets a visceral, tactile response when she sees the caterpillar of the Gray Half-Spot (Nedra ramosula). The caterpillars she’s seen are a lustrous, rich, deep cinnamon. The pictures she’s seen of adults remind the BugLady of a packet of Pintail (duck) feathers she once had, and she seriously wants to see an adult; another example is here; and here’s the life cycle. 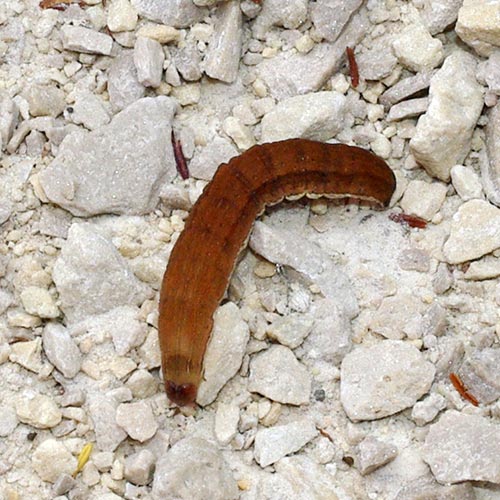 Gray half-spots are in the Owlet moth family Noctuidae.

Gray half-spot caterpillars feed on members of the St. Johnswort plant family (they’re also called St. Johnswort moths), and if that includes the pasture weed Common St. Johnswort, they are welcome, indeed. Like those of the other Hypericum species, the leaves of Common St. Johnswort, touted as a natural tranquilizer, contain pigment dots. The chemicals released when the plant is consumed metabolize incompletely under the skin of man and beast, and susceptible individuals get irritated guts and become extra photo (sun) sensitive. The Klamathweed beetle, a small beetle that was introduced to control St. Johnswort on western grasslands, has fetched up in Wisconsin fields. BugFans who self-medicate with St. Johnswort should question health food stores about the purity of their potions.

The Large Mossy Lithacodia (Protodeltote muscosula). What a bunch of names! There are a number of Lithacodias, and many of them are “bird-poop” moths. The species name, muscosula, means “mossy gums” and is inexplicable. Large mossy lithacodias are also Owlet moths. 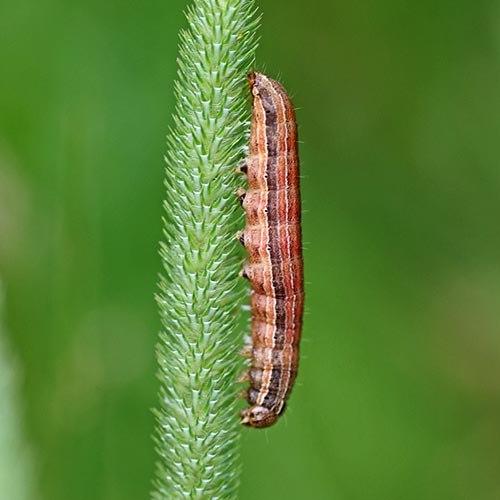 Mom is a picky egg-layer who, according to Sogaard, lays her eggs “in long rows inside the tightly rolled whorls of grass leaves.” The caterpillars, which may be this color or green with longitudinal stripes, often target grasses that grow in or near wetlands. Adults are well-camouflaged (up close and personal).