These three, neat beetles have been queued up for a long time, waiting for their BOTW. They have two things in common—all three are in the beetle family Cerambycidae, and all seem to be leading lives under the radar—two of them don’t even have common names.

The Cerambycidae (the Long-horned Beetles—possibly from the Greek karabos “beetle” and keras “horn”). They have many fans—partly because of their improbable antennae (the males of many species have antennae that are considerably longer than their bodies are); partly because some species reach “lunker” size (some North American species grow to two-plus inches, which is dainty compared to the 6 ½ inch Titan beetle of South America); and partly because although many are drab, some are astonishingly showy. Their other claim to fame is their ability to vocalize; some species make a squeaking sound by rubbing their head against their thorax, especially when handled.

It’s a large family, with more than 20,000 species worldwide and 1,200 species north of the Rio Grande, and it’s divided into eight subfamilies. Many LHBs are economically important because their larvae bore into dead/dying/cut wood, lowering its value as timber (but aiding in the recycling of the forest). Adults feed variously on flowers, fungi, sap, vegetation, etc., if they feed at all. They are sturdy fliers (remember, the hardened front pair of wings, the elytra, covers a second pair of membranous flying wings. That armor allows them to crawl under logs and leaves without tearing their flying wings).

In a Class Insecta where most individuals’ life span is a year or less, Cerambycids can be remarkably long-lived. Adults of many species live for several years, but the larval stage can last a decade or more.

When the BugLady photographs wild geraniums in spring, she often does so in the company of a lovely Pidonia ruficolis beetle or two (judging by pictures posted on line, other photographers do, too). Within the Cerambycidae, they are Flower longhorns in the subfamily Lepturinae (leptos is Greek for narrow). Unlike most other Cerambycids, Flower Longhorns are mostly diurnal (active in the day), are often found on flowers, and may be brightly colored, and they have a “broad-shouldered” appearance, sometimes dramatically so.

This species lacks a common name, but since ruficollis means “red necked,” we’ll christen it the Red-necked Pidonia (RnP). It is found in the eastern half of North America; its Internet presence consists of pictures and inclusion in museum collections and on natural area biodiversity lists. Its color is described as “highly variable.”

Brachyleptura rubrica, another Flower Longhorn, is also found in woodlands in the eastern half of North America, where its larvae feed on decaying trees of deciduous forests like oak, cherry, beech and hickory, and the adults feed on flat-topped clusters of white flowers such as dogwood and Queen-Anne’s Lace. Brachy is Greek for short, and refers to the slightly shortened elytra. Note the striped antennae.

The Arrowhead Borer, Xylotrechus sagittatus—(saggitatus is Latin for arrow), is named for the pale markings on its elytra. It’s in the subfamily Cerambycinae. The BugLady photographed it on the ceiling of her porch one night in mid-summer. Bugguide says that it frequents pine forests from Arizona to Manitoba to Maine to Florida. Its presence suggests that the BugLady ought to check into the health of her conifers—the larvae are said to begin their feeding in the sapwood layer but then to bore farther in, restricting their travels to a single annual ring. They pupate within the tree and the newly emerged adults chew their way up to the surface. One source said that the adults are so active on tree bark that they are often mistaken for crickets. 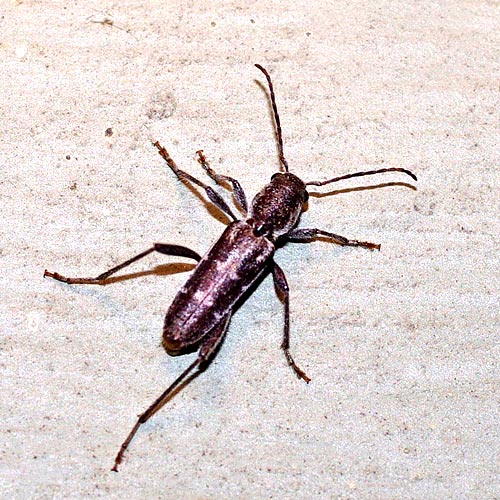 The BugLady is fascinated by all things phoretic (phoresy is the behavior in which one species uses another, harmlessly, as a taxi), and she found several notes about pseudoscorpions (of previous BOTW fame) being found on the legs and antennae of ABs and some other Cerambycids in Florida (check and click on the smaller pictures at the bottom, too). Apparently, the pseudoscorpions inhabit the phloem layer of the cut pine and emerge with the adult beetles. Some mites also hitchhike on the AB, tucked snugly under its wings.