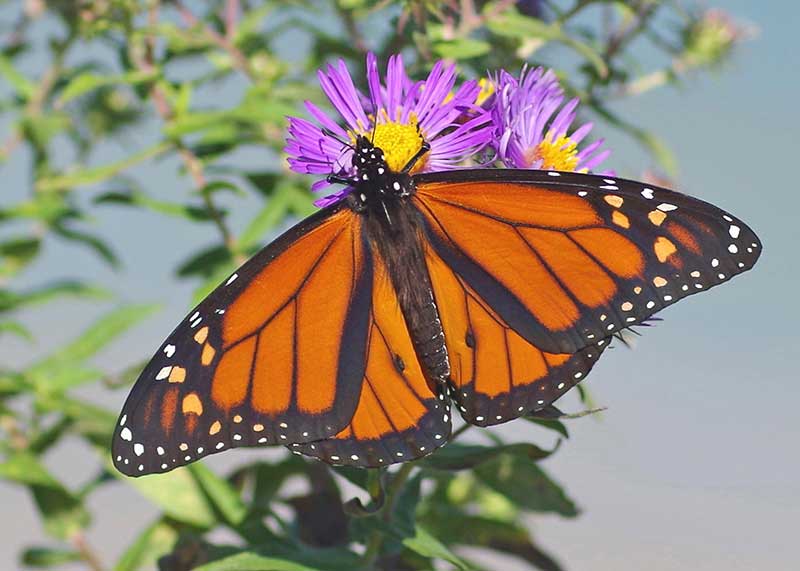 The BugLady wrote this article for the newsletter of the Western Great Lakes Bird and Bat Observatory (an organization that would love to have your support). 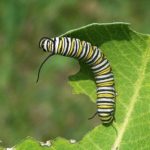 Although they meet the criteria to be included as a Threatened species under the Endangered Species Act (ESA), Monarch butterflies will not receive that protection at this time. This “waiting list” status (there are 161 species ahead of it) does not offer the butterfly any protections, but the spotlight is now on it, and its case will be reviewed annually until 2024, when it will probably be listed. Although they are numbered at about 60 million today, that’s down significantly from the hundreds of millions of Monarchs that were estimated to exist before the mid-1990s. Overall, their populations have dropped by more than 90% since then. For reference, the land area of North America is about 9.5 million square miles, and assuming that Monarchs were evenly distributed across the continent—which they aren’t—that works out to just over six Monarchs per square mile. 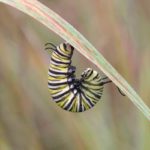 In 2014, the US Fish and Wildlife Service was petitioned to declare Monarch butterflies a Threatened species (“a species likely to become endangered within a significant portion of its range in the foreseeable future”). The FWS’s 90-day study indicated that listing might be merited, which initiated a status review.

Once a petition is accepted, ESA protocol requires the FWS to issue a 12-month finding, but that 2015 deadline went by. In 2016, the organizations that originally petitioned the FWS filed a complaint with a Washington D.C. court, which set a new the deadline of December, 2019. In 2019, an extension was granted in recognition of the fact that understanding the effects of climate on Monarchs warranted more data. The decision not to list was finally released in mid-December, 2020. 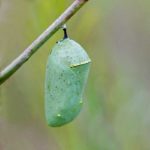 When listing was originally proposed in 2014, the agency received more than 500,000 comments from individuals, organizations, and businesses in support of the Monarch.

Monarchs are complicated. Their numbers naturally fluctuate, and historically, there are two populations – a western population in the Pacific Coast states, and a population east of the Rockies. The western population, which has declined dramatically from 200,000 in 2017 to only 2,000 in the winter 2020-21 count, moves north and south along the coast and overwinters in California. Eastern Monarchs, the bulk of them from the Midwestern states, migrate south in fall to overwinter in a small area in the mountains of central Mexico. There are also some permanent populations in southern Florida and along the Gulf Coast. In terms of listing, the western and eastern populations can’t be separated, and California’s state ESA does not monitor insects. 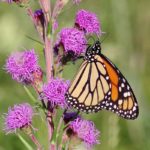 While the FWS acknowledged the needs of the Monarch, they noted that there are already many federal, state, and local conservation efforts that work to increase breeding and nectaring habitat. Monarchs have also introduced themselves (or been introduced) outside their original range, to Australia, New Zealand, Bermuda, Puerto Rico, Cuba, Hawaii, New Guinea, Portugal, and Spain, and some of these populations are doing well in their new homes.

Monarchs need to be on the ESA list so that federal protections will apply to them, but placing a species on the list means that the FWS must draw up and carry out a recovery plan, which they must budget for. Being put on the waiting list is a “win,” but the lower a species’ numbers are allowed to go, the harder it is to bring them back, and some researchers predict that Monarchs could be at the point of no return within ten years.

Karen Oberhauser, a conservation biologist at the University of Wisconsin, Madison, summarizes the frustration: “While all of the people that care about monarchs are doing a lot of positive things, there are a lot of negative things happening at the same time. We’re running as fast as we can to stay in the same place.”

The winter of 2020-2021 was a rough one for Monarchs. First, 26% fewer Monarchs arrived at the wintering areas in central Mexico than the previous year. Second, the Monarchs that got there found fewer trees to perch in, due to illegal logging, normal tree fall, and drought. Gaps in the forest canopy affect the temperature and humidity around the Monarchs—remember, this overwintering thing only works because the Monarchs are inactive in winter, living off the fat supplies they packed on during their leisurely south-bound flight. Anything that forces them to use that precious energy (colder air, human disturbance) threatens their return trip. Finally, there was less milkweed in their breeding grounds, too, due to weather events related to Climate change.

Three easy things you can do for Monarchs:

Americans aren’t the only ones who treasure Monarchs.

Watch an amazing video of Monarchs on their wintering grounds.