Lightning bugs float silently (but brilliantly) over the dark fields and wetlands of June and July, inspiring poets and children of all ages. Also called Fireflies, they are neither flies nor true bugs; they are members of the order Coleoptera and are more correctly called Lightning beetles (LBs). And their ethereal light show is all about sex. 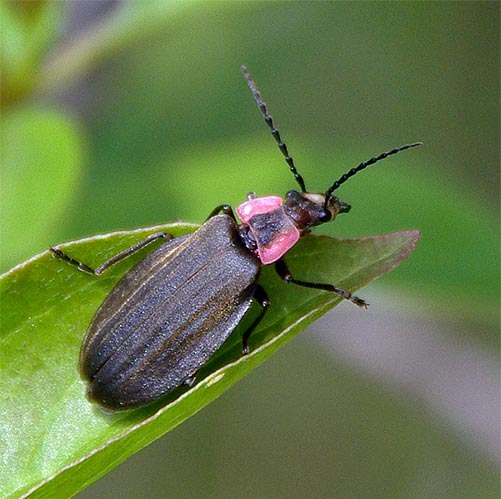 Their path to the skies starts in late summer of the previous year. Mid-summer eggs hatch into carnivorous larvae that eat insects, snails and other small critters. They subdue their much larger prey by injecting a paralyzing fluid, and they are considered important controls on snails and slugs. According to the Field Guide to Insects of North America, the larvae of the common genus Photinus are subterranean and “may hunt earthworms in packs!” They overwinter as larvae, buried in the soil, and when spring comes, they wake up and keep on eating. The BugLady thinks that the larvae look like tiny pangolins. They pupate, also in the earth, in early summer before emerging for their brief-but-dazzling stint as adults. There is disagreement about the diet of adults; they are listed both as carnivores and as non-eaters. The super-sized shield on the thorax is a good field mark for the LBs. 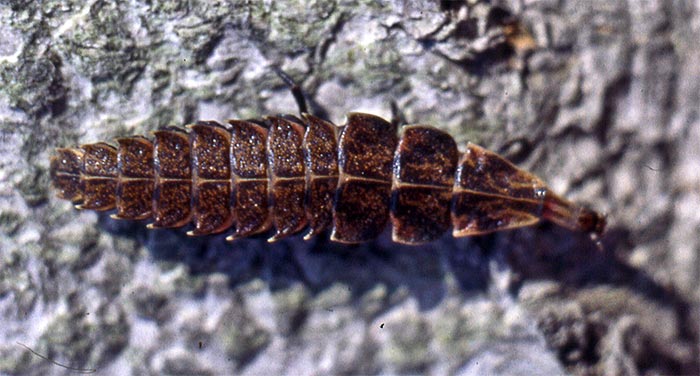 Light production is an uncommon talent in insects. Astonishingly, there are semitropical click beetles that can (some of these, called cucujos, are worn as luminous decorations by partygoers south of the border) (their eggs and larvae also glow). Luminescence is achieved by others because they harbor photogenic bacteria (here meaning that the bacteria are light-generating, not that they are picturesque, though the BugLady is sure they are both). Try to imagine a springtail, glowing green except for its antennae and legs.

Their light is a “cold” light. The typical light bulb is an inefficient energy-user, wasting 90% of the energy as heat. Less than 8% (some say less than 3%) of the energy the LB expends on light is lost as heat. Light is produced at the south end of the abdomen, in a photogenic layer that is located beneath a white, reflecting layer. In a reaction of an enzyme called luciferase on a chemical called luciferin (some old friction matches were called Lucifer matches), chemical energy is converted to light energy.

Day-flying members of the LB’s own family (Lamphyridae) don’t glow—producing light would be a waste of energy for a diurnal insect. All LB larvae, some pupae, and even some eggs also glow, for reasons that are not understood. But LBs don’t just gleam, they produce controlled flashes of light. The various species of LBs divide the landscape by altitude, habitat, light color and intensity, time of evening, and duration of flight. Each species has its own particular “Morse Code,” though male and female “codes” may be different.

Males signal from the air, and females, which may be wingless, respond from on or near the ground (females and luminescent larvae are called glowworms). The signals continue until they find each other and romance ensues. Females of some species of LBs resume flashing after mating, adopting the code of a different species. If she is successful in luring a male, this femme fatale will eat him (she, it seems, does eat as an adult!); this practice is called “aggressive mimicry,” but females generally do not eat males of their own species.

LB Family members have poisonous blood (they ooze toxic droplets from the base of the wing covers), which may explain why Soldier beetles like the Pennsylvania leatherwing mimic them. In Discovering Nature at Sundown, a good source of LB information, Elizabeth Lawlor relates that a frog that eats enough LBs may glow temporarily but seems otherwise unaffected. 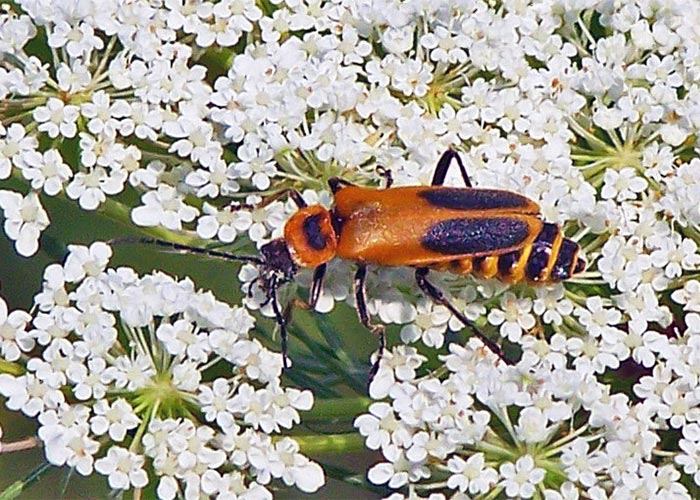 Accounts abound of certain species of LBs in the tropics, especially Southeast Asia, that gather by the thousand on specific trees. As dark falls, they begin to blink—first randomly, and then in complete synchronicity, for hours. The cast reassembles nightly for months to produce a spectacular light show