OK – this is a love story of sorts. It’s an episode that originated in 2009, and it has already been rerun once and now rewritten again. But…..the BugLady just returned from southern Ohio, where she co-led a workshop about Bugs and Wonder (an unappreciated, sometimes suspect, and insufficiently-entertained state of mind) (and mostly we could say that about the bugs, too). We trawled the prairies and woods for bugs during the day, and at dusk and into the night, we hunted for fireflies.

Do you call them lightning bugs or fireflies? Carl Linnaeus coined the latter term in 1767. Check this map out. Note that the more arid, western parts of North America are either “firefly-lite” or that their fireflies are day-flying and therefore “mute,” as evidenced by the lack of names for them.

Lightning bugs float silently (but brilliantly) over the dark fields, woods, and wetlands of June and July, inspiring poets and children of all ages. They are neither flies nor true bugs; they are members of the Order Coleoptera and the family Lampyridae and are more correctly called Lightning beetles. And yes, their ethereal light show is all about sex. 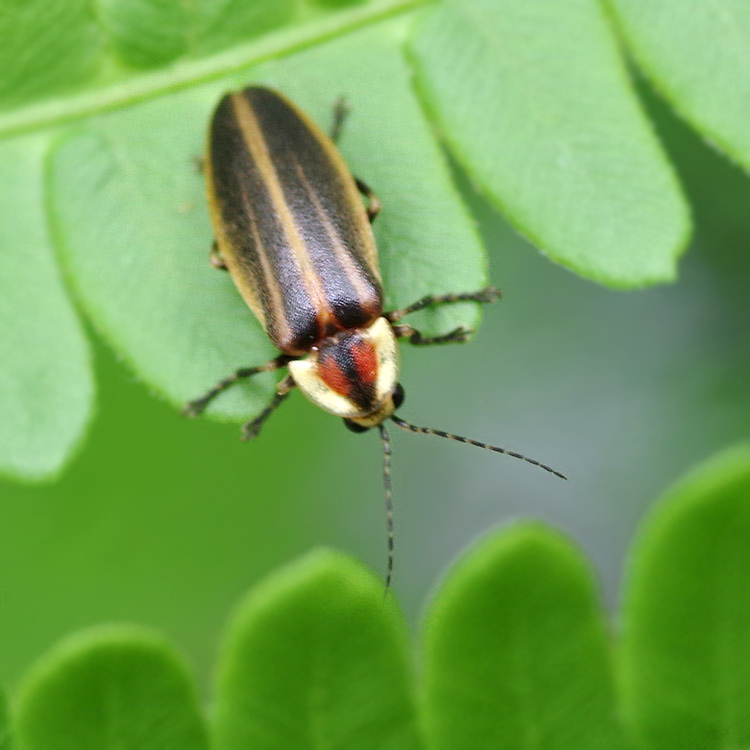 Their path to the skies starts in late summer of the previous year. Mid-summer eggs hatch into carnivorous larvae that eat insects, snails and other small critters (the BugLady thinks that the larvae look like tiny pangolins). They like damp conditions (remember –a thatch of grasses, especially tall grasses, creates a microclimate that’s generally moister than the air five feet above it), and there are even a few species whose larvae are aquatic.

They overwinter as larvae, buried in the soil, and when spring comes, they wake up and keep on eating (the natural history of firefly larvae needs more study). They pupate in early summer, also in the earth, before emerging for their brief-but-dazzling stint as adults. 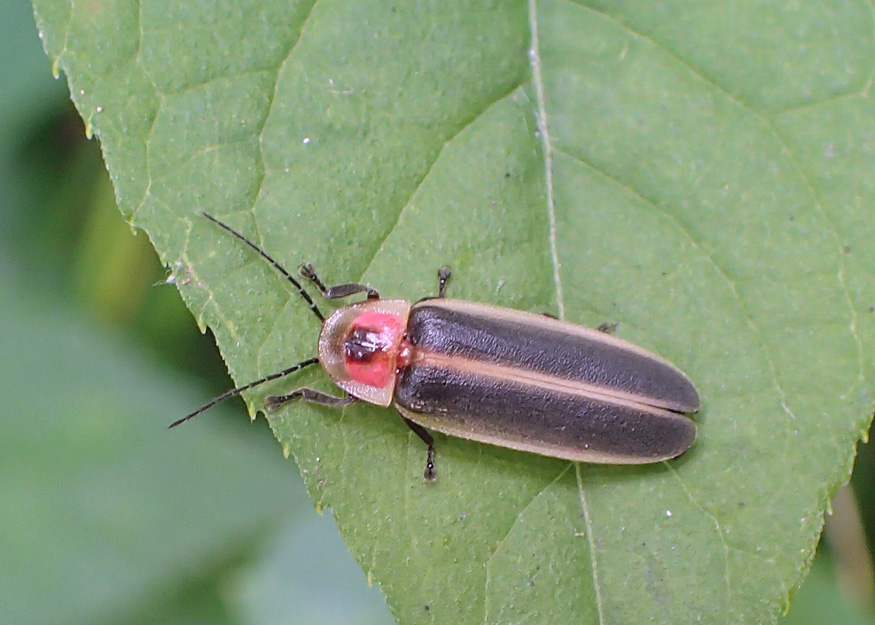 They subdue their much larger prey by injecting a paralyzing fluid, and they are considered important controls on snails and slugs. According to the Field Guide to Insects of North America, the larvae of the common genus Photinus are subterranean and “may hunt earthworms in packs.” The diet of adults varies by species – there are carnivores, omnivores, and non-eaters. 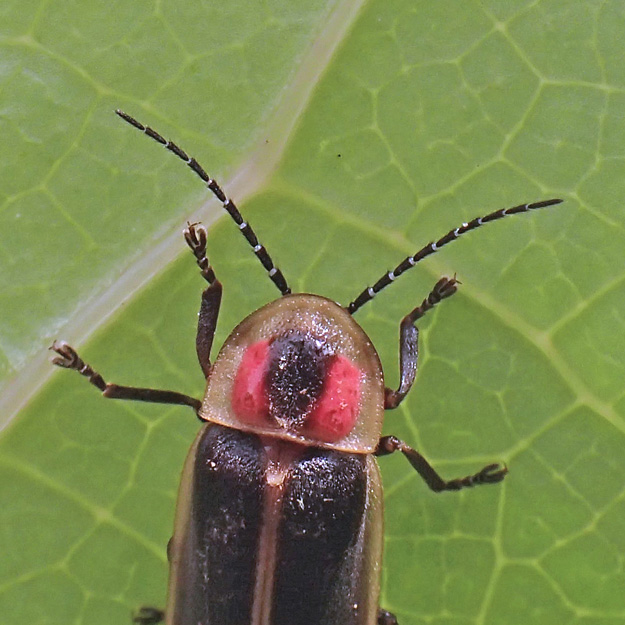 Most threats to their populations tend to be man-made – wetland loss, pesticides, light pollution that dims their displays, paving, and mowing (many adults, after all, are resting in the grass, waiting for sundown). Populations of some species are shrinking, and more eyes are needed. For a Firefly Citizen Science project, check this out from massaudubon.org.

Light production is an uncommon talent in insects. There are semitropical click beetles that can (some of these, called cucujos, are worn as luminous decorations by partygoers south of the border, and their eggs and larvae also glow). Luminescence is achieved by others (including some springtails) (try to imagine a springtail, glowing green except for its antennae and legs) because they harbor photogenic bacteria (here meaning that the bacteria are light-generating, not that they are picturesque, though the BugLady is sure they are both).

Firefly light is a “cold” light. An incandescent light bulb is an inefficient energy-user, wasting 90% of its energy as heat. Less than 8% (some say less than 3%) of the energy that a lightning beetle expends on light is lost as heat. Light is produced at the south end of the abdomen, in a photogenic layer that is located beneath a white, reflecting layer. Chemical energy is converted to light energy by the action of an enzyme called luciferase on a chemical called luciferin (history buffs please note: some old friction matches were called Lucifers). 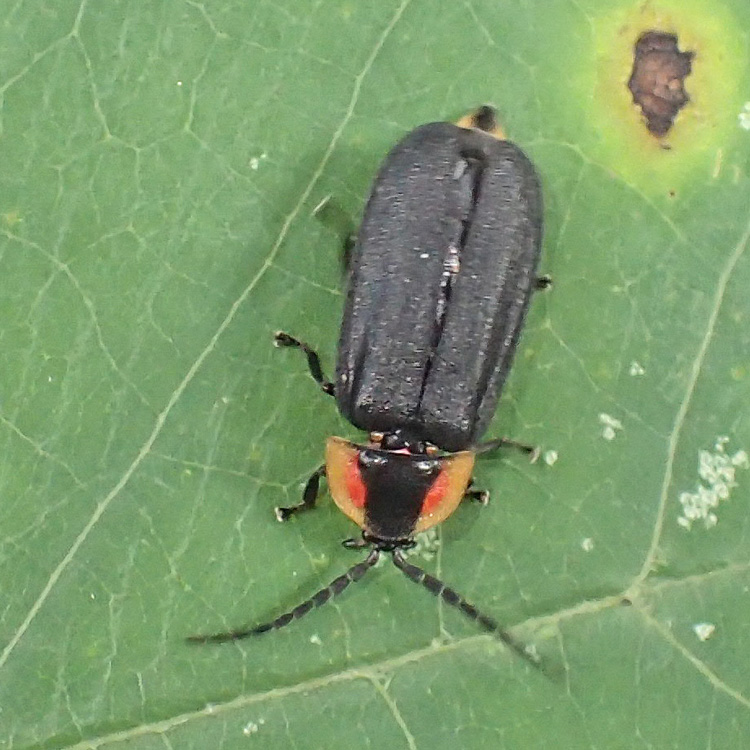 Day-flying members of the Lampyridae don’t glow – producing light would be a waste of energy for a diurnal insect. All lightning beetle larvae, some pupae, and even some eggs also glow, for reasons that are not fully understood. But lightning beetles don’t just gleam, they produce controlled flashes of light – strobes, aerial “J’s,” three-second horizontal dashes, and more. The various species of fireflies divide the landscape by altitude, habitat, light color and intensity, time of evening, and duration of flight. Each species has its own particular “Morse Code,” though male and female “codes” may be different.

Males signal from the air, and females, which in some species are wingless, respond from on or near the ground (females and luminescent larvae are called glowworms). The signals continue until they find each other and romance ensues. Females of some species of lightning beetles resume flashing after mating, adopting the code of a different species. If she is successful in luring a male, this femme fatale will eat him (she, it seems, does eat as an adult!); this practice is called “aggressive mimicry,” but females generally do not eat males of their own species. 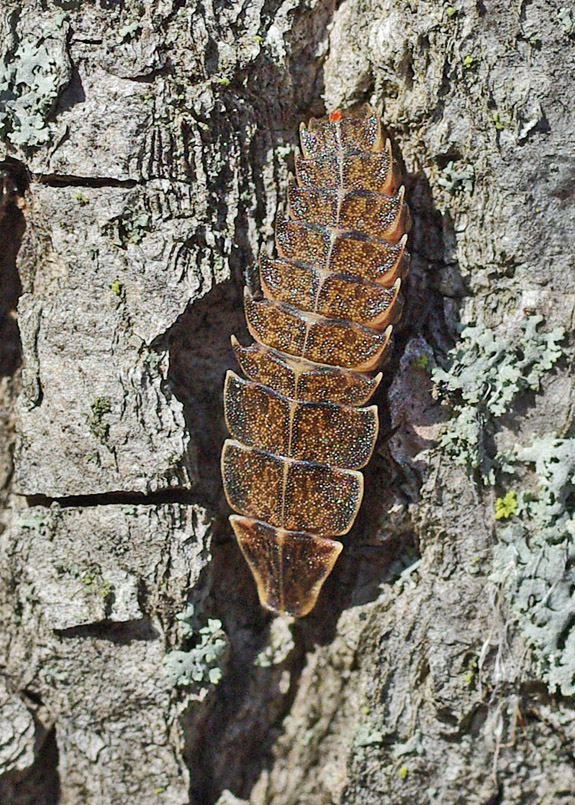 Lightning beetle family members have poisonous blood (they ooze toxic droplets from the base of the wing covers). Besides being an invitation to party, their light is probably also an advertisement to predators that the firefly is toxic (though apparently better tolerated by some than by others). Check out this YouTube video. In Discovering Nature at Sundown, a good source of lightning beetle information, Elizabeth Lawlor relates that a frog that eats enough LBs may glow temporarily but seems otherwise unaffected.

Since this episode originally appeared, the BugLady has become increasingly aware of (and confused by) firefly look-alikes in the form of soldier beetles. Some click beetles and net-winged beetles are also mimics (lots of good pictures of look-alikes starting on page 8). Most lightning beetles have a shield-shaped thorax that covers most or all of their head, and a bunch of soldier beetles also have a widened and colorful thoracic shield, though a soldier beetle’s head may protrude from under the shield significantly more than a firefly’s. Every time she looks into this matter, the BugLady ends up relabeling a few pictures; a few soldier beetle pictures are included here.

Accounts abound of certain species of lightning beetles in Southeast Asia that gather by the thousands on specific trees. As dark falls, they begin to blink – first randomly, and then in complete synchronicity, illuminating the trees for hours. The cast reassembles nightly for months to produce a spectacular light show. Do you have to buy a steamer ticket to witness a similar spectacle? You do not – synchronous firefly displays occur in the Appalachians, but you’ll need to enter a lottery to see them: https://smokymountains.com/park/things-to-do/synchronous-fireflies-smoky-mountains/. Here are three similar but different videos: https://www.wbir.com/article/news/local/predicting-synchronous-fireflies-peak-in-the-great-smoky-mountains-a-gamble/51-561422926 and https://www.youtube.com/watch?v=QCWkzQqO7Ro and https://www.nationalgeographic.com/animals/invertebrates/group/fireflies/.

Just out is a book by Lynn Frierson Faust, who is seen in one of the videos. In Fireflies, Glow-worms, and Lightning Bugs, she offers descriptions, ranges, photos, flash patterns, habitats, and terrific common names, names like the Woodland Lucy, Little gray, Big dipper, and Chinese lantern.

At the other end of this love story is the Arc of Appalachia, the organization that ran the Wonder Workshop, an organization that has been buying and providing stewardship for chunks of prairie, gorge and rich eastern forest, with its old growth beech and maple, sycamore, tulip tree, sassafras, and gum. Find their story at http://arcofappalachia.org/.

PS – Workshop participants, this is for you: https://uwm.edu/field-station/chigger-rerun-family-trombiculidae/.