Lichen moths have it all!! Toxins, aposematism, attitude, thoracic tympana and ultrasonic emanations, sensory setae, fecal flicking, mimicry, and even cannibalism! What an insect!!

Taxonomic Lumpers and Splitters have been working on the moths again. Lichen moths (Hypoprepia sp.) are in the Tiger moth family Arctiidae—or in the family Erebidae—depending on whose book you read. Apparently, a bunch of moths in the Owlet moth family plus all of the members of the tussock moth and tiger moth families, plus a bunch of small families have been assigned to the family Erebidae, but Moth People are not 100% on-board with that yet, so stay tuned. And, according to Wagner in Caterpillars of Eastern North America, “Adults of eastern Hypoprepia vary considerably in different parts of the Southeast, so much so that some lepidopterists feel additional species will eventually be recognized.”

Lichen moth larvae eat lichens and blue-green algae that they find growing on tree trunks. As BugFans will recall from high school biology, lichens are a plant partnership—two plants growing symbiotically as one. Structure, roots, and water are provided by a fungus “body,” and photosynthesis is carried out by algae that live within the fungus (or, as we Naturalists say—too often—“a lichen is a fungus and an alga that have taken a likin’ to each other.”). Along with lichens, caterpillars have been reported to eat their smaller brethren and even LM pupae.

Toxins from their veggies may make LM caterpillars poisonous to predators. The hairy caterpillars don’t come in startling warning (aposematic) colors (they look a bit like gypsy moth caterpillars), but the bright colors of the adults probably signal a non-tasty morsel within. 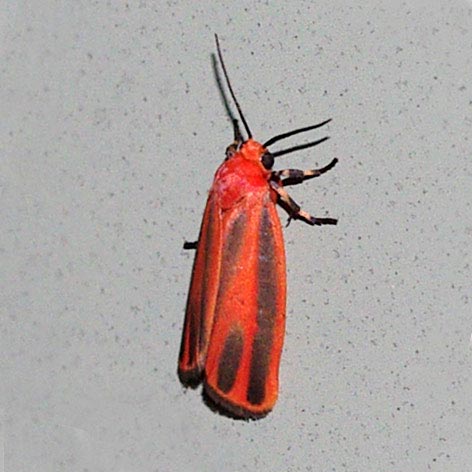 LMs have some interesting sensory abilities, both as caterpillars and as adults. Like typical adult tiger moths, LMs have “ears” located on their thorax. They also make a variety of ultrasonic noises with organs on their thorax—this is an insect that can hear bats coming and, confident in its toxicity, sass them back, warning them against feeding on unwholesome LMs. They also “vocalize” during courtship, and females have a pair of glands on the top of their thorax that crank out pheromones—chemical scents”that lure males to them. According to Sogaard, in Moths of the North Woods, caterpillars in the family are “typically densely hairy. Some (perhaps all) caterpillars are sensitive to low-frequency sound through setae” (hairs).

LMs overwinter as caterpillars, and adult LMs in this neck of the woods probably do not eat, though their tropical brethren do.

The BugLady has been going happily bug-eyed trying to decide whether these are Scarlet/Scarlet-Winged Lichen Moths or Painted Lichen Moths or both (she suspects both). SLMs are supposed to be very red and PLMs to have a yellowish cast, but she’s seen official pictures of each that stray into the other’s tint. One reference suggests that SLMs have red heads and PLMs have yellow/gray heads (or maybe not). At any rate, their lifestyles, ranges, and habitats (woodlands, east of the Rockies) are very similar, and these are two of only four species in the genus in North America. Right now.

It has been suggested that adult Painted Lichen Moths (Hypoprepia fucosa) mimic lightning beetles, which have toxic blood.

Scarlet Lichen Moths (Hypoprepia miniata) are partial to lichens that grow on the trunks of red pine, and therefore gravitate to more coniferous woodlands (though they will nosh on lichens elsewhere if red pines aren’t available). Miniata comes from the Latin word miniatus, which references lead-based vermillion or red paint.

Oh—and they have beauty!