Moths, often inscrutable to the BugLady, are contributing members of the ecosystems they occupy. Caterpillars impact their food plants in sometimes devastating ways; adults are often listed as flower pollinators; and both stages provide protein for their predators. Some have important ecological lessons to teach us.

Geometrid moths have starred in these pages before – their caterpillars are the inchworms or “earth measurers” that, lacking a few legs in mid-body, locomote by extending their front end and then hitching their rear end up toward it, arcing their body in the process. Peppered moth caterpillars are “twig mimics” that employ countershading to look two-dimensional instead of three. The Peppered moth’s name (Biston betularia) is doubly meaningful; its species name, betularia, refers to the birch tree genus Betula, one of the PM caterpillar’s many host plants, and “peppered” comes from the speckled appearance of the adult. It’s also called the Salt and Pepper Geometer. 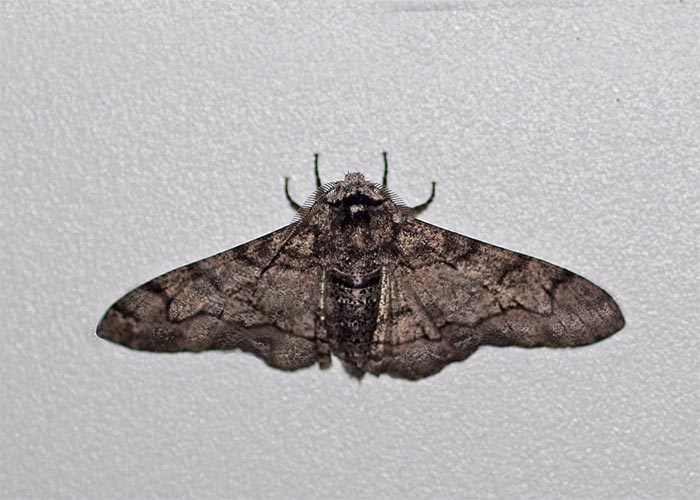 PMs enjoy woodlands and edges, and they have a wide range; if you’re in the BOTW viewing area, there’s probably a PM near you. They are found in and apparently native to both North America and temperate Eurasia (at least the BugLady didn’t see any European sites blaming America or American sites blaming Europe for their presence). They’re medium-sized, with a wingspread of about 1 ¾”, and they come in both melanic (dark-with-dark-speckles) and non-melanic (white-with-dark-speckles) forms. These are considered different color forms or “morphs” rather than subspecies; they can all interbreed and so can their offspring.

The story of the Peppered Moth is oft-told in ecological lore; it’s the poster child for Evolution/Natural Selection. Once upon a time, before the Industrial Revolution heated up in England, there lived a pale gray moth that could sit, unnoticed by birds, on lichen-covered trees. The dark morph moths (a.k.a. bird food) were far easier to spot resting on those birch trunks, and the pale moths outnumbered them.

Enter the Industrial Revolution, which in Britain was accompanied by hitherto unprecedented air pollution. The skies turned dark; lichens, those canaries in the “air quality mineshaft,” died from excess particulate matter in the air; and tree trunks were stained by soot. By the mid-1800’s, British scientists noticed that the once-uncommon dark morphs blended into the now-grungy tree trunks and were becoming much more common, and the light-colored moths were being eaten (the same was true in North America). The dark morphs that apparently accounted for 2% of the British PM population in 1848 increased to 95% by the end of that century, and the term “industrial melanism” was coined. Today, air quality is much better and the light-colored moths again predominate. A textbook case of Natural Selection, in which the individual whose adaptation favors survival (that is, whose adaptation gives it an edge in the present living conditions) gets to pass its genes along to the next generation. Natural Selection in PMs was driven by the increased predation of conspicuous moths by birds.

PMs arouse a lot of passion, as evidenced by websites like Whyevolutionistrue, truthinscience, trueorigin, good-byepepperedmoth, textbook-fraud-pepper-moth, and peppered-moth-scam. Is the PM story based on “bad science?” (No, the BugLady hasn’t been drinking the Kool-Aid, but there sure is a lot of Monday morning quarterbacking going on). In “bad science,” people interpret their observations in service of a preconceived conclusion. A scientist in the 1950’s who set out to recreate the original PM experiments also concluded that the PM story was one of Natural Selection at work, but he used some unnatural experimental conditions that ultimately fanned the flames of disagreement by non-scientists. He placed the nocturnal PMs on tree trunks in broad daylight where, not surprisingly, birds found them – a valid point that called his ultimate results into question. And, it has been demonstrated that the majority of PMs prefer to rest up in the crown of the tree or under the joint where a branch meets the trunk—not exposed on the lower trunk. But another, more careful British experiment that was carried out by Michael Majerus between 2001 to 2007 did take the moths’ natural history into account and validated the century-old conclusion.

The BugLady photographed the adult WS as it perched over her back door just before midnight in mid-summer. She found the caterpillar a few weeks later. There was a significant accumulation of frass (bug poop) on the driveway under a tree, so she looked up (but not with her mouth open) and eventually spotted the caterpillar (you can also find them by noting chewed leaves on trees). By coincidence, the same species as her midnight caller.

The Waved Sphinx (Ceratoma undulosa) looks like a pretty typical member of the sphinx moth family Sphingidae (though some sphinxes are downright gaudy). Sphinx or Hawk moths are largish, fast-flying (up to 12 mph), heavy-bodied, narrow-winged moths that use their long tongues to extract nectar from tubular flowers as they hover. They’re often seen in the late afternoon, and they continue feeding into the night. Their caterpillars are called, collectively, “hornworms” because of the horn or spur protruding from their posterior during part or all of their caterpillar stage. Some caterpillars are crop/tree pests (more about that in a future BOTW), but most are not. Sphinx moths got onto people’s radar last year when the exquisite White-lined sphinx moth had a boom year. 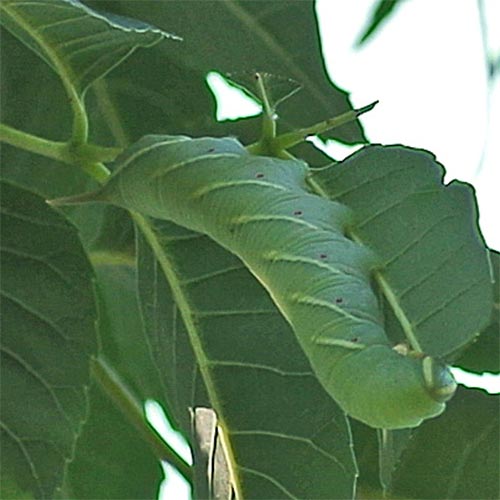 Waved Sphinxes are a decent-sized moth, with a wingspan of 3 ½” plus, but they’re most often seen sitting in an arrowhead pose. They can be found (nocturnally) from Texas to Alberta and east, in woodlands, edges, along waterways, and in suburbs, and they’re considered pretty common.

There is one generation a year here in God’s Country and two in the South. WSs overwinter in the soil as pupae and emerge as adults in early summer. They dance the dance, and their pale, green eggs hatch about eight days later. The caterpillars are solitary feeders, and they grow to about 3 ½” in length at maturity. The offspring of tiny braconid wasps are internal parasitoids of WSs.

And the collateral damage? Adult WSs don’t eat, living only long enough to mate and lay eggs. A number of caterpillar food plants are listed—woody plants including fringe tree, lilac oak, hawthorn (and privet, BugFan Joe)—but their main host is ash. In fact, there are a half-dozen species of sphinx moths that feed primarily on ash. But ash trees are, in a big chunk of eastern North America, under attack by the “Emerald ash borer”, an alien beetle whose population has exploded since its introduction near Detroit, probably in the early 1990’s (yes, there’s a BOTW for that!). If you’re an ash specialist and the ash are doomed, and you are accustomed to operating at Mother Nature’s measured pace, what are your options?

The Peppered moth is a notable example of an organism that was able to take advantage of the right adaptation at the right time and in record time. Our children’s children will record whether the Waved Sphinx is able to move its attention to its secondary food sources.