The BugLady admits that she is ambivalent about moths. There sure are a lot of them – they outnumber butterflies, their fellow lepidopterans, by about 10 to 1 overall! But, so many of them are small and gray/tan and the BugLady, with apologies, hasn’t developed the patience to hunker down and learn them (and their caterpillars are a challenge, too). On the other hand, there are striking moths like the Haploas (from the Greek haplo for “single” or “simple”). The genus name Haploa used to be Callimorpha, which means “beautiful form.” The Haploas are sometimes called Crusader moths, because of their shield-like wing shape and markings.

There are six species of Haploa north of the Rio Grande. They are in the moth family Erebidae (tiger and lichen moths); if you have an older field guide, they’ll be found in the family Arctiidae, which was folded into Erebidae about a decade ago. Family members have reduced mouthparts (adults of most temperate-zone species don’t eat), and they have sound-making equipment located on their thorax. They use sound in courtship, and if you make sound, it behooves you to be able to hear it, so they have “ears” on their thorax, too. They are also able to hear bat sonar, to which they respond by emitting a series of clicks that warn bats that the moths are unpalatable, due to chemicals ingested by their caterpillars. Bright (aposematic) colors advertise a species’ toxicity visually (Sogaard, in Moths and Caterpillars of the North Woods tells us that “in one study, only a few of 24 adults were eaten by native birds”); this auditory signaling is called acoustic aposematism. One species of tiger moth can actually jam bat sonar.

Outside of being beautiful moths, LeConte’s Haploas are not famous for much. Some writing from more than a century ago connected them with agricultural crops – the LeConte’s Haploa, (aka the Blue-spangled peach moth), was listed as a pest of apple orchards, and another species was called the Strawberry tiger moth – but there doesn’t seem to be much excitement about them today. They are mostly found in grasslands, woodlands and wooded riverbanks east of the Great Plains.

Much of what has been written about the Leconte’s Haploa concerns its appearance, which is described as “variable” both in pattern (1, 2, 3, 4), and in lightness/darkness. And, of course, there are other Haploas that it can be mistaken for. Its body is around an inch long, and its wingspan may reach two inches. In his article in the Proceedings of the United States National Museum written in 1888, the John B. Smith says:

This genus contains, according to the most recent list, three species, clymene, interrupto-marginata, and lecontei, the latter with four varieties and three synonyms. The first two of these are well-marked species which have never caused questions as to their limits, but the third, lecontei, has bothered authors more than enough – some subdividing it into five species, others referring to them all as varieties of one and the same form.

As for the caterpillar, the BugLady photographed a few caterpillars feeding on nettle in a woodland in mid-October a few years ago, but could never figure out what they were. She was able to put two and two together (probably) when she started researching Haploas. Leconte’s Haploa larvae have catholic tastes, feeding on an array of woody and non-woody plants. They overwinter as caterpillars and awake to complete their metamorphosis in spring or early summer. Adults are on the wing in mid-summer. 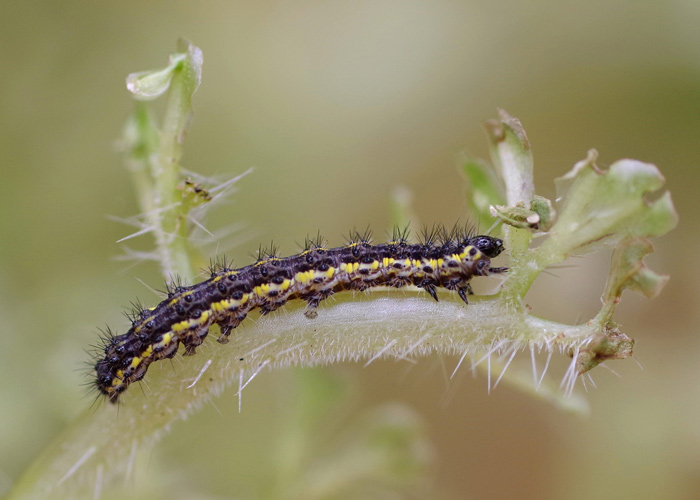 It has been a long time since we visited our sometime series “Who were those guys?”, a series that spotlights the pioneer entomologists who collected and described species in the early days of organized entomology, and in this case, in the early days of scientific cataloging in America, when every species was a new species. Instead of talking about the man who named the Leconte’s Haploa (Felix Edouard Guerin-Meneville, who also introduced silkworms to France in hopes of starting an industry), the BugLady would like to recognize the man for whom this moth was named, Doctor John Lawrence LeConte (it’s amazing how many of the pioneers of entomology had day jobs, many as physicians). LeConte was a contemporary and friend of John James Audubon, and the LeConte’s Thrasher (discovered by Audubon) and LeConte’s Sparrow were also named for him (there’s a very small chance that the namee was John L.’s cousin, physician and geologist Joseph LeConte, with whom he paddled 1,000 miles on the upper Mississippi in a canoe in 1844, but it was probably not Joseph’s brother, a physician/physicist/chemist/conservationist also named John LeConte).

John L. LeConte (1825 to 1883) was a respected entomologist who published extensively both in America and in Europe and who was, according to Wikipedia,

He traveled throughout the Western Great Lakes area and explored California, the Colorado River, Honduras, Panama, Europe, and North Africa, sending home thousands of beetle specimens (and birds, and other materials) as he went, before settling in Philadelphia. He collected birds for others, and they collected beetles for him. He was an army surgeon during the Civil War, belonged to the American Philosophical Society, the American Association for the Advancement of Science, and the National Academy of Sciences, and he founded the American Entomological Society and served as Assistant Director of the US Mint in Philadelphia. Besides the birds and the moth, hundreds of other species were named after him.