The BugLady is inching through her skipper butterfly pictures, staring at the ones she’s simply labeled “skipper” and trying to attach names to them. Early results suggest that she does not know the secret handshake yet. 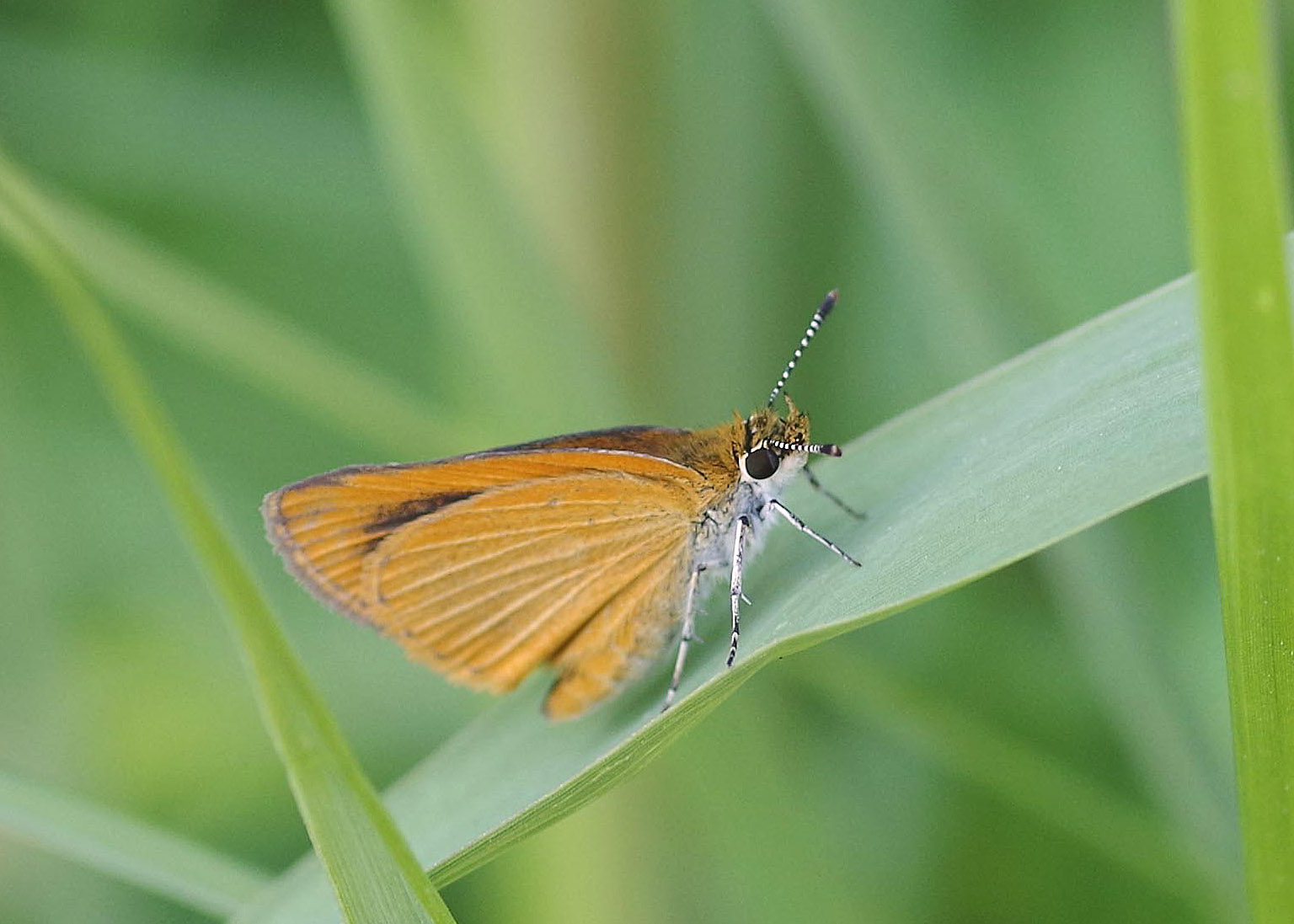 Least Skippers are in the Grass Skipper subfamily Hesperiinae, in the skipper family, Hesperiidae – “Grass Skipper” because the food plants of most of the caterpillars are grasses, in which they create shelters by webbing blades together. Grass Skippers generally fold their wings together while they feed, but they tend to hold them partly open at rest, with the forewings at a different angle than the hindwings. Most are either orange and brown, or brown and orange, and the Least Skipper is one of the “orangier” species.

Also known as Common Least Skippers and Least Skipperlings, Least Skippers (Ancyloxypha numitor) are, as their name implies, on the small side, with a wingspan of only about an inch. They’ve got a pretty ambitious scientific name – according to John and Gloria Tveten in Butterflies of Houston and Southwest Texas, “The rather formidable genus name … stems from the Greek ankylos, meaning ‘curved’ or ‘hooked,’ and xiphos, ‘sword.’ This species is the namesake of Numitor, King of Alba, as mentioned in the Aeneid.”

Least Skippers are pretty common and can be locally abundant (some authors use the word “colonial.” They are found in damp-to-wet, grassy/sedge-y areas from the Great Plains, east, including southern Canada. The “Butterflies of Massachusetts” website says,

An inhabitant of grassy wet meadows, this skipper seems, like other meadow skippers, to have benefited from the widespread land clearing of the agricultural era 1600-1850, despite the loss of some wetlands in this process. It also seems to have remained common through the succeeding period of industrial development…. Given its wide continental range … one would not expect the Least Skipper to be particularly adversely affected by climate warming….provided there is sufficient moist open area habitat.

Massachusetts records show that the Least Skipper starts its flight season earlier and ends later than it did a century ago. 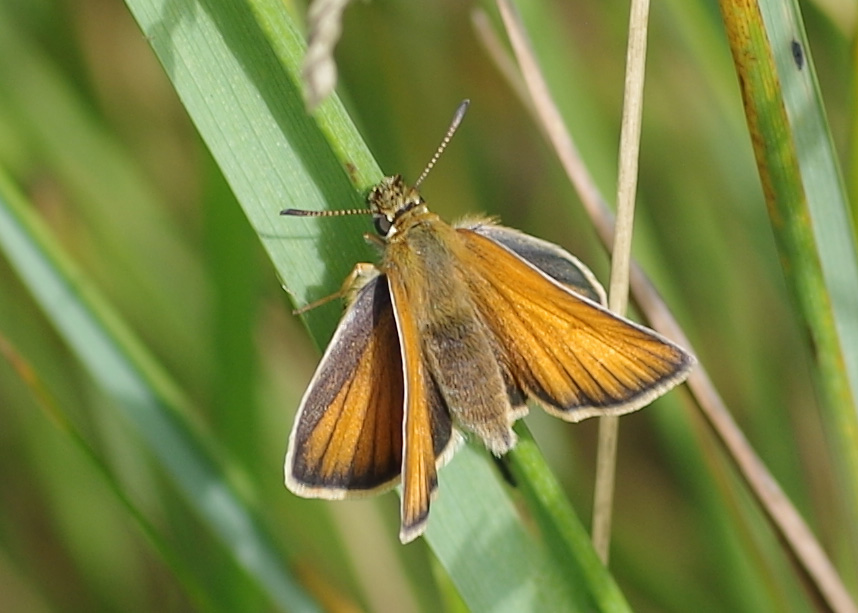 In this neck of the woods, the slightly larger European Skipper, an alien species that arrived in Ontario in 1910 and was first seen in the US in Michigan in 1925, is the main butterfly that it could be confused with (unless you’re the BugLady, who has her fingers crossed about the “European Skipper” pictures included here). Seen with its wings closed, the Least Skipper is a small, orange butterfly, but with its wings ajar, it looks dark, save for an orange splotch in the middle of each hind wing. The facing sides of the wings (the underside of the front wing and the upper side of the back wing) are opposites – one has a dark spot with a wide, orange border; the other an orange spot with a wide, dark border. The veins on the underside of the front wing look frosty, and the antennae are ringed with white. Males have noticeably longer abdomens. 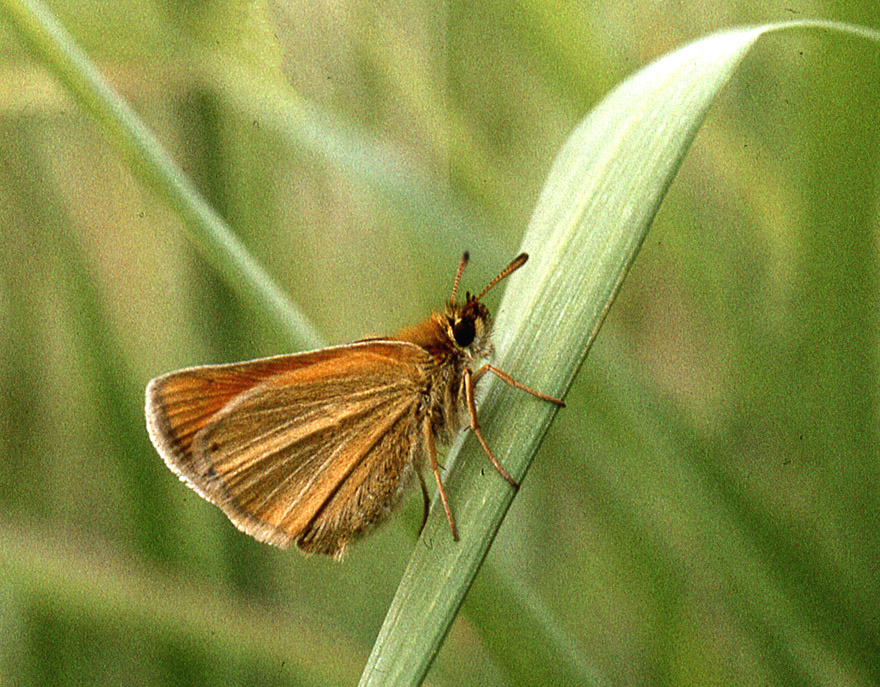 The caterpillar is green with a brown head, and most descriptions mention that it has “four pairs of white wax glands along the sides of the back half of the abdomen” (bugguide.net). Wax glands? Wagner, in Caterpillars of Eastern North America explains,

The whitish subventral wax glands present in many of our grass skippers play an important role in their pupal ecology. As prepupal larvae begin spinning their cocoons, the wax comes free from the body and is incorporated into the walls of the cocoon; some of the wax will later collect over the surface of the pupa. The extent to which the wax waterproofs the cocoon, excludes pathogens and other natural enemies, or in other ways enhances survival is poorly understood.

[SIDEBAR: When the BugLady Googled “caterpillar wax glands,” the internet served up a few articles about wax moth caterpillars (a scourge of bee hives) that may save us from all those plastic grocery sacks: Check out the article form the University of Cambridge or, (less optimistically) the article from the Huffington Post]. 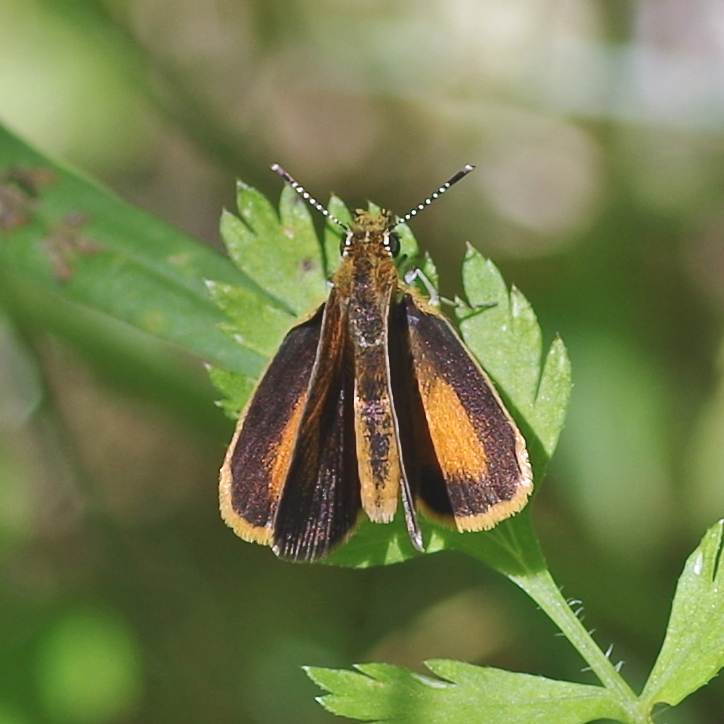 There are at least two broods of Least Skippers here in God’s Country each summer, and possibly three. Males fly through the grasses endlessly, scouting for females. Mission accomplished, a female lays eggs, one at a time, on any of a variety of grasses or sedges. When the caterpillars hatch, they create leaf shelters. In Every-day Butterflies: A Group of Biographies (1899) Samuel Scudder (who seems to have studied sentence structure with his contemporaries, William and Henry James) tells us that,

When first hatched, each caterpillar constructs a nest for itself on either side of a blade of grass by fastening together the opposite edges with from five to twelve independent strong bands of silk, the threads of each band crossing each other, thus making the bands broader at their ends than in the middle; after the first moult this is perfected by closing the interstices with a thin, irregular web of silk; behind or beneath this the caterpillar remains. This insect is triple-brooded and passes the winter either as a chrysalis or as a full-grown caterpillar.

The butterflies differ from all other members of the family to which they belong, in the feebleness of their flight and their general lack of vigor; their flight is weaker even than the Satyrids [the Wood Nymphs], and recalls them in its dancing movement. Never darting about from one spot to another like other Skippers, they move in a leisurely, languid manner, skipping over the grass tops of a lane or among the reeds of a marshy rill, in the most dainty manner possible; they do not turn much from one side to another but fly with short and slight vertical movement, apparently giving but a single beat of the wings to each little skip, and frequently stopping to alight; they never rise above the herbage but to light on a flower. 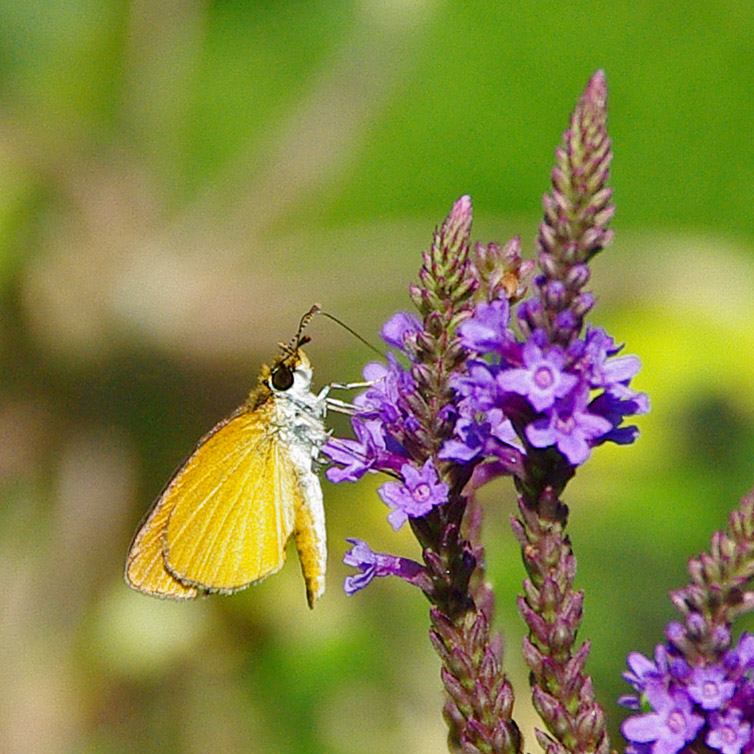 Adults feed on nectar, and because of their size, they favor small flowers. The caterpillars eat the leaves of wild, wetland grasses, and they’ve been known to eat bluegrass, cultivated rice, and reed canary grass. The rice and bluegrass probably explain why a biography of the Least skipper (titled “The Least Skipper Moth” but with no specific damage attributed to it) appears on the website of a pest control agency in the New York City area (on call 24 hours a day for your pest-control needs). There was nothing about the larvae on the usual University Extension websites and wanted posters other than a paper about rice plant height and larval density (shorter plants get more caterpillar traffic).

Two interesting, behaviors – one described by Scudder, “They have a curious habit, when at rest, of moving their antennae in a small circle, the motion of the two alternating; that is, when one is moving in a forward curve, the other is passing in a reverse direction.” The other in The Butterflies of Iowa – “Individuals who are missed by a swing net often drop to the ground and feign death.”