“There’s never a leaf nor a blade too mean to be some happy creature’s palace.” J. R. Lowell

First of all, with apologies to botanists everywhere, here’s a quick and dirty review of the anatomy of a leaf. It’s a thin, green organ that consists of the working guts sandwiched between top and bottom layers of epidermis that keep the innards in place and prevent them from dehydrating. The area between the epidermal layers is the mesophyll (“middle leaf”), which is made up of a “spongy” and a “palisade” layer of living “filler” or ground cells called parenchyma (the parenchyma that contains the chloroplasts that carry out photosynthesis is called chlorenchyma). This tissue is served by veins that move food and water into and out of the leaf and provide a certain amount of rigidity (and may restrict a leaf miner to a small portion of the leaf). Here’s a nifty diagram at PBS Learning media (who knew?).

What is a leaf mine? It’s a translucent trail left by a tiny larva as it feeds in the parenchyma of a leaf. Mines may be linear in shape, or serpentine, trumpet, blotch, or tentiform (a slightly three-dimensional blotch). The larvae grow as they feed, and so does the circumference of their mine. Artist/blogger Anita Sanchez calls mines “botanical doodling.” 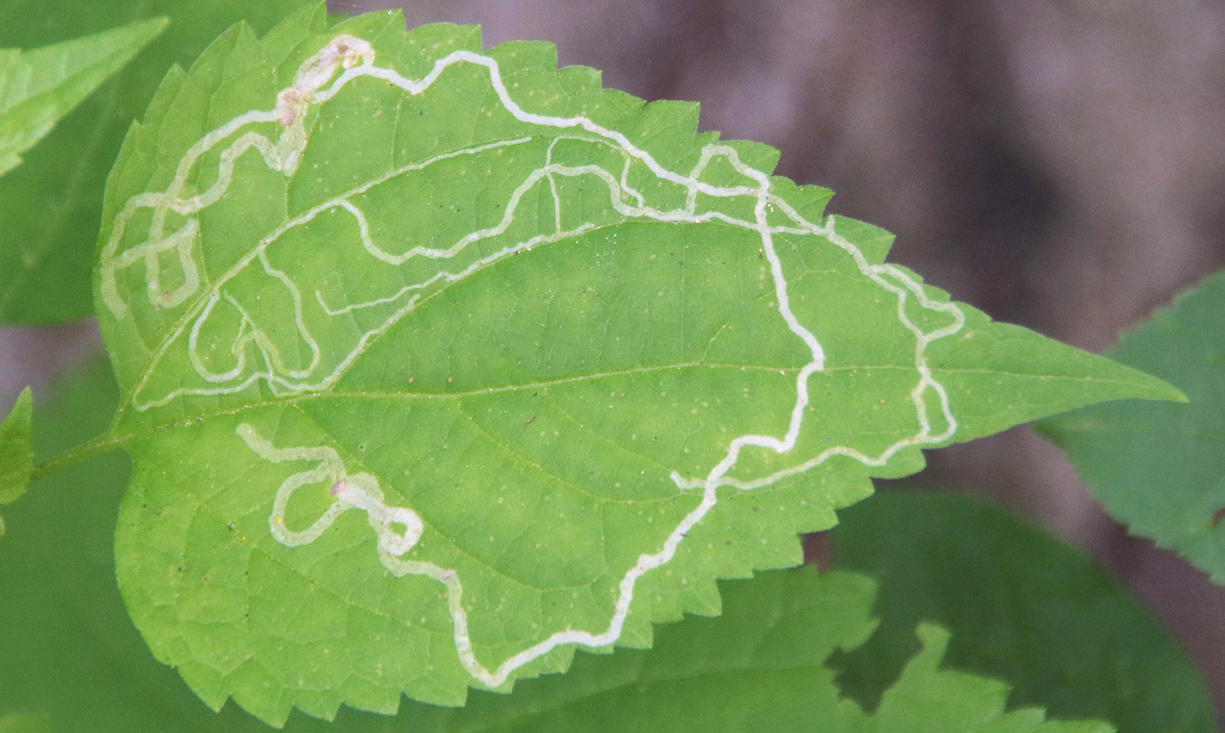 And what are leaf miners? Sibyl Hausman, in her article “Leaf Mining Insects” (The Scientific Monthly, July, 1941), says:

These tiny creatures are small worms, the larval stages of insects which are able to obtain plenty of food and a suitable lodging by living entirely between the surface cells of the leaves. Certain members of the Lepidoptera, Coleoptera, Hymenoptera, and Diptera spend their larval life within the leaf tissues, feeding on either the palisade or spongy parenchyma cells where chlorophyll is located, well protected and concealed by the thin, colorless cells of the upper and lower epidermis….. The forms of these mines or tunnels, and the leaves of the plants in which they occur, are both characteristic of a given species.” Researchers Connor and Taverner refer to leaf mining as “consuming live foliage while simultaneously dwelling inside it.

Being a leaf miner is just a hair’s breadth away from being a borer (which excavates deeper into plant tissue) and a gall-maker, and insect families that contain one often have the others. Leaf miners generally do their work in more mature leaves; if they started chewing on young, actively-growing leaves, the plant would produce extra tissue and envelope them, creating a gall. Leaf miners can tolerate lots of the chemical defenses that leaves throw at other grazers, like toxins and sticky, milky juices (though they sometimes drown in excess latex). Of the approximately one million species of insects known today, about 10,000 are leaf miners, and most families of plants entertain miners, even conifers and aquatic plants.

What goes in, must come out – according to Sibyl Hausman, “Often the mines are obscured by the accumulation of dark particles of waste material, known as frass, but some species keep their mine clean by distributing the frass in separate pockets.” Check out this image of agromyzid mines.

What do the miners look like? Needham, Frost, and Tothill, in Leaf Mining Insects (1928) describe them:

The principal needs of the miner in accordance with which all its peculiarities of form have been evolved, are for thin, flat, forward-reaching mouthparts, and for holding apparatus for keeping them up against the mesophyll for their work. Hence the mouth turns forward and the head takes on the shape of a flat wedge. Walking legs tend to disappear and a variety of stay apparatus tends to be developed – spacing humps, and tubercles and bristles and setulae … The larva may develop chewing mouthparts capable of devouring cells bodily, or it may develop cell-shearing apparatus and sap-feeding habits.

[NB. The four orders that produce leaf miners are all flying insects (so they can find their host plants) with complete metamorphosis, and despite the radically different appearance of the adults of those orders, their leaf-mining larvae, shaped by the demands of their environment, are quite similar.]

Eggs are often laid in or on the underside of the host plant. “The larvae of some of them on hatching from the egg may come out on the surface of the leaf, but in all the more specialized miners they pass directly into the leaf through the epidermis that the egg covers, and do not appear outside (Needham, et al).” Some larvae spend only a short time in the mines, some live their larval stage there and pupate elsewhere, and others pupate there, too, poking through the leaf’s epidermis to emerge as an adult.

In describing the emergence of an oak leaf gall-maker, Needham says,

The pupa has a sharp, hornlike process on its head with which, when ready for the final transformation, it can penetrate the walls. When part way out of the leaf the pupal shell (chrysalis) breaks open on the back, and from it emerges a resplendent little moth, clad in scales of gold and ermine and jet, a veritable atom of Lepidopterous loveliness. There is hardly anything in nature more beautiful than are some of the moths that have leaf-mining larvae.

(It’s a wonderful book; check it out here.)

Just how safe is this pantry/hideaway? Not as safe as you’d think. Egg predation is rare (anything that fits between the top and bottom surfaces of a leaf has a pretty tiny egg), but despite the fact that they’re under cover, the larvae are preyed upon by a varied bunch of parasitoids whose mothers manage to locate them. They’re also eaten by predatory insects, a few bird species, and accidentally, by general leaf-eaters who get a bit of protein as a bonus. Premature leaf drop also takes its toll.

And apparently, they’re not protected from cosmic events like asteroids, either. Mines persist in leaves after the leaves fall, and they can even be seen in fossil leaves and used by paleo-entomologists to study the miners’ life styles, gauge populations, and even clarify taxonomy. The BugLady found a paper out of Penn State about how the dinosaur-killing asteroid that hit the Yucatan Peninsula in the late Cretaceous period also killed off the leaf mining insects in the western US (and elsewhere, since three-quarters of all of the plant and animal species on earth became extinct in that one event) (it’s called the Cretaceous–Paleogene (K–Pg) extinction event – see this lovely video from Britannica. According to a study done in southeastern Montana, the leaf miner fauna bounced back in that area after only a million years, populated by newly-minted, post-Cretaceous species.

Except when the mines appear on leafy vegetables like spinach, or in large outbreaks, mines are a fleeting, cosmetic issue. The tissue around the mine does dry out, but mostly, the plant is not injured. Chemical control is tough, since the larva is inside the leaf.

Needham, et al, tell us that “The feeding operations of many leaf-mining larvae may be observed with a good lens, holding their leaf up to the light and watching them work by looking through the transparent epidermis,” which, of course, violates the Prime Directive since you have to pick the leaf to do it (unless you’re far more spry than the BugLady and can climb underneath).

Pictured here are mines of the: 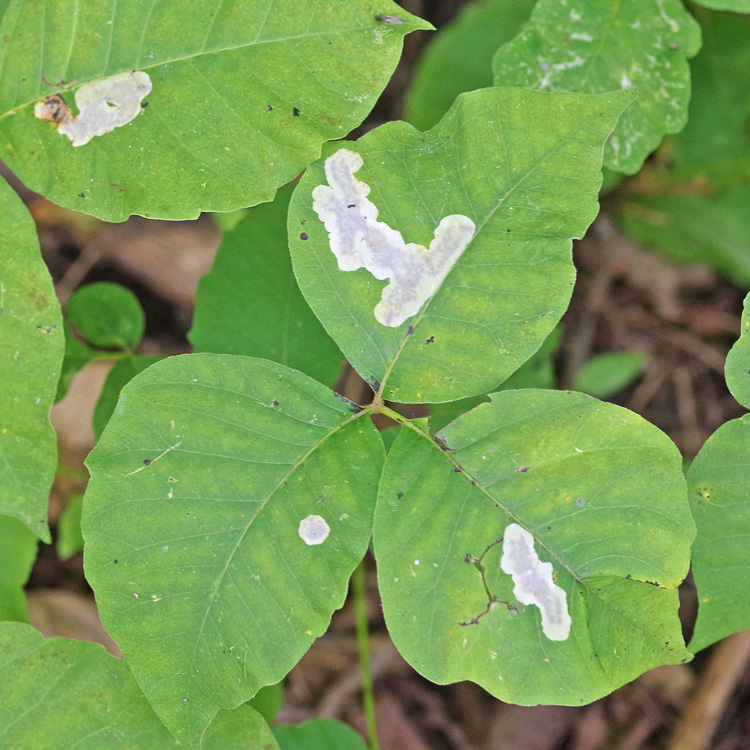 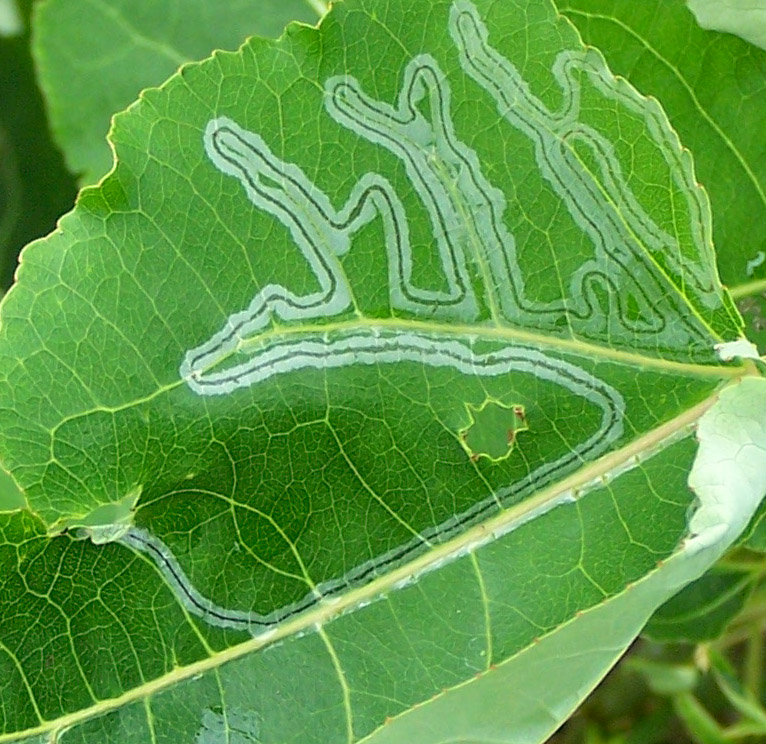 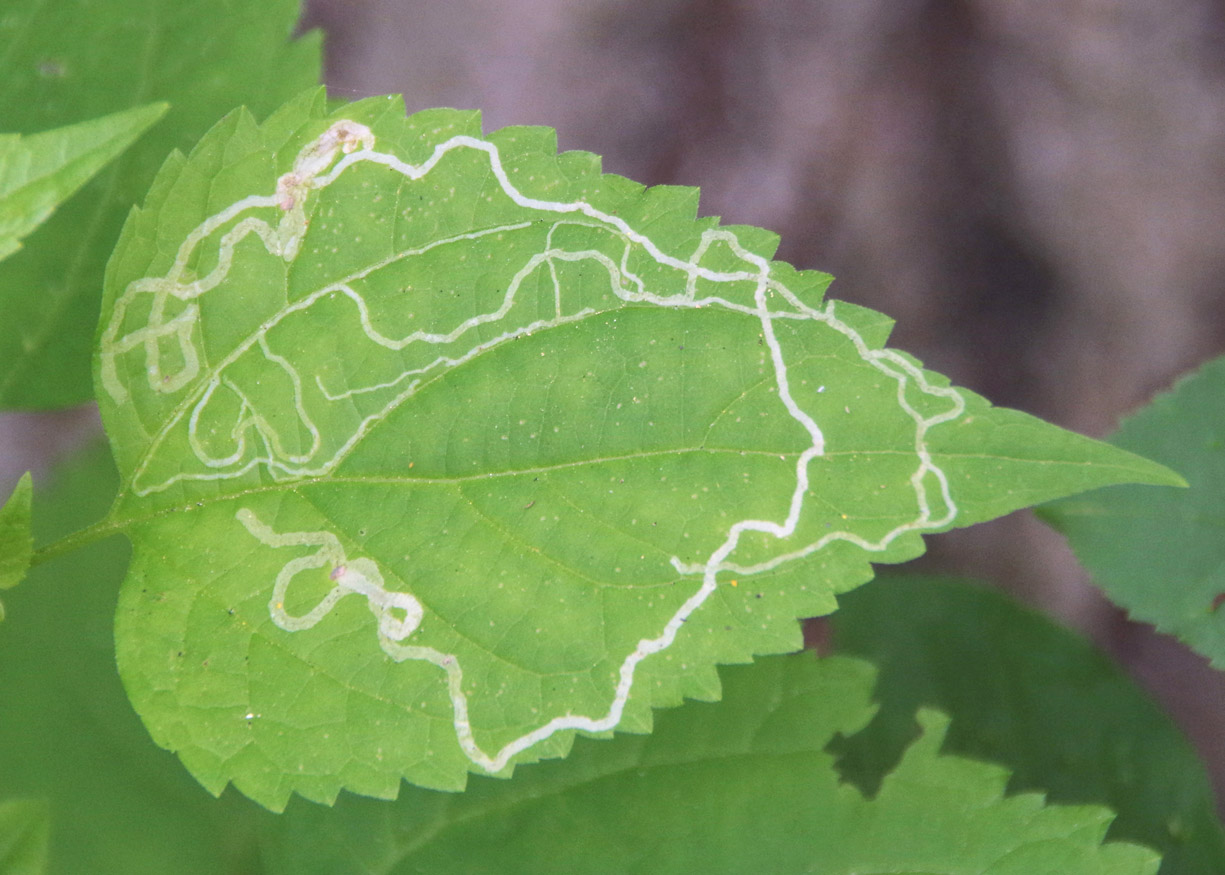 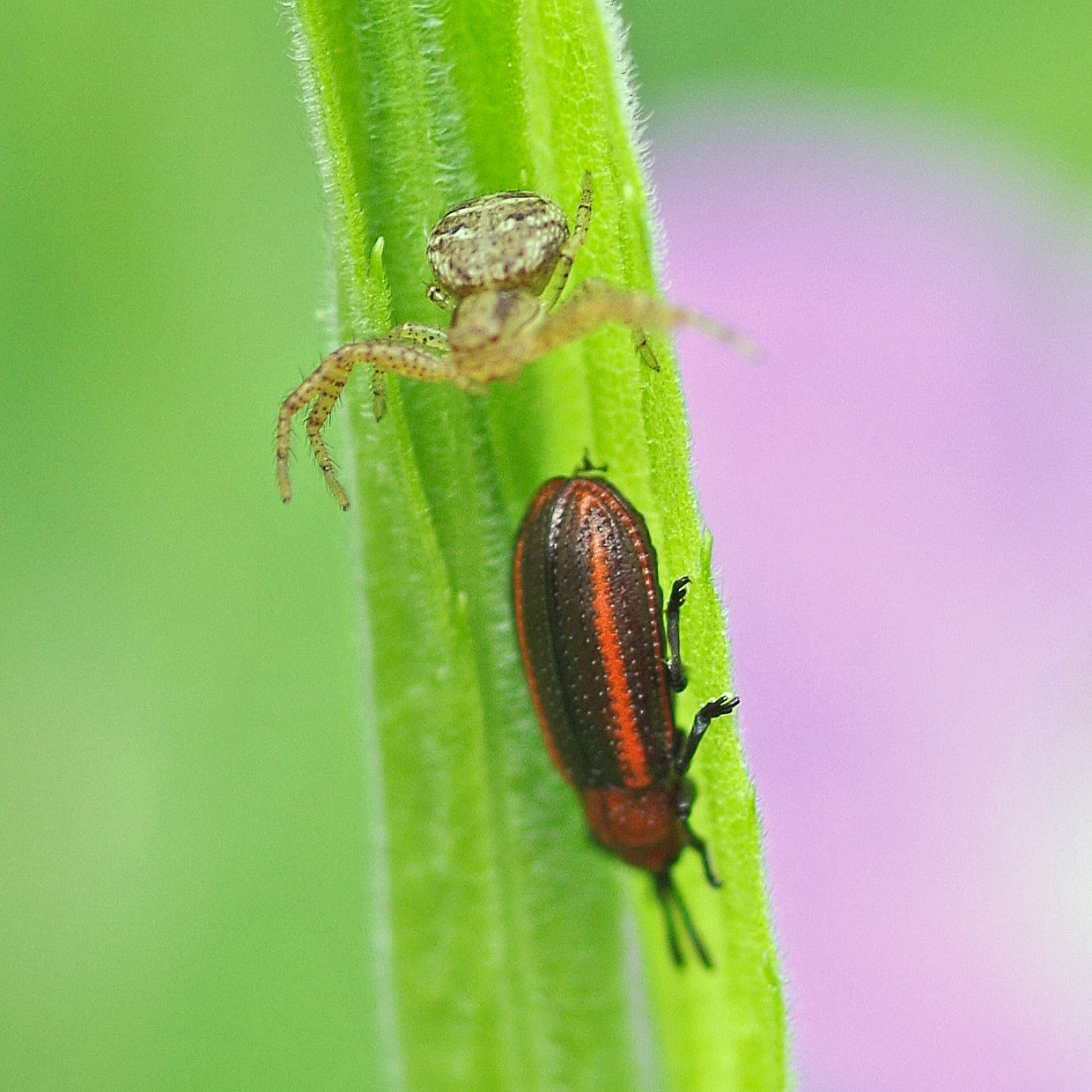 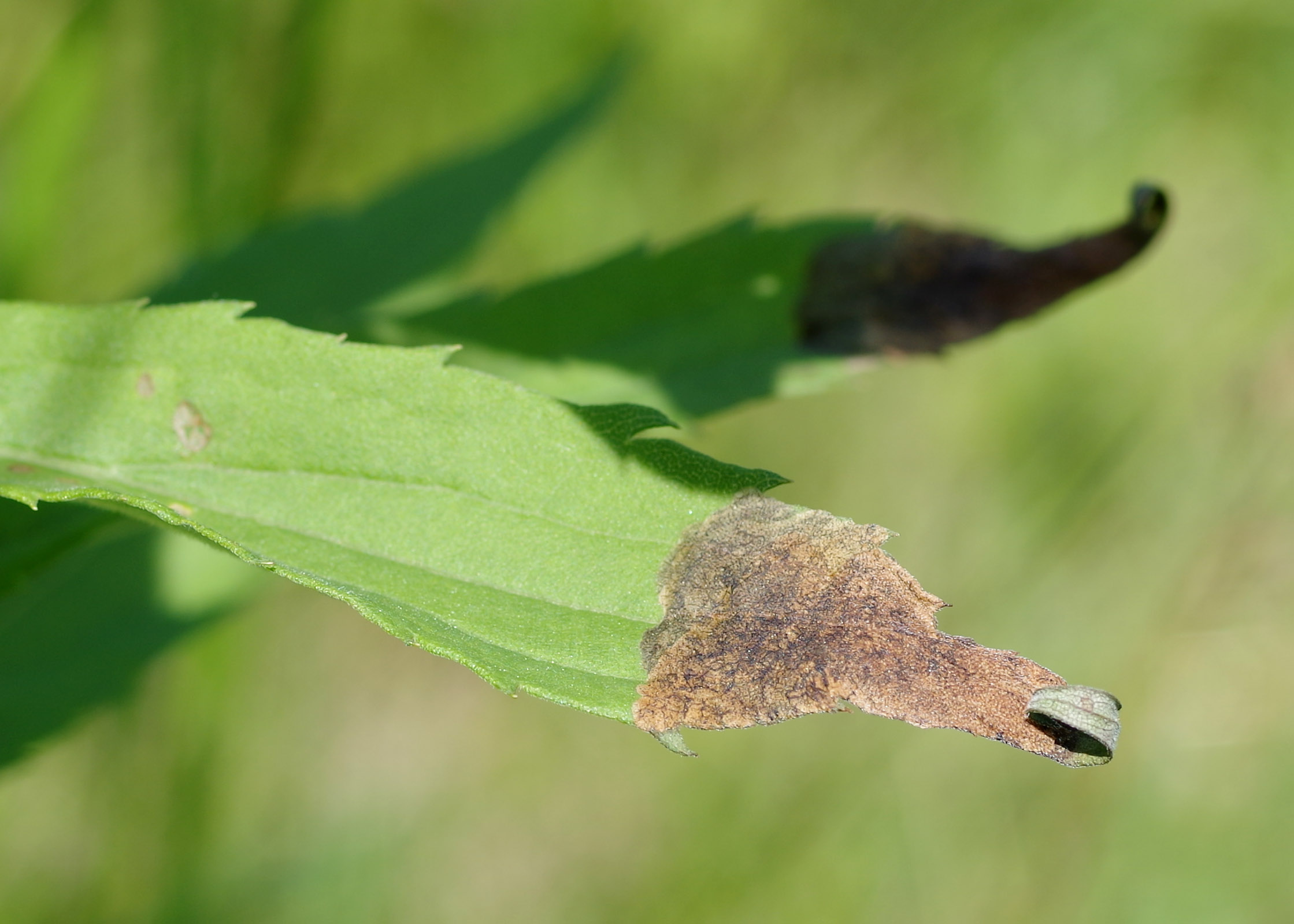