Leaf-footed Bugs (L-fBs) and Squash bugs are in the bug family Coreidae. They are darkish, mid-to-large sized bugs (¾” to 1”), and many (but not all) have what is described as a leaf-shaped “flange” on the lower part of the back leg (tibia). The BugLady got curious about the word “flange” and discovered that it has its origins in heraldic imagery, probably deriving from a “flinch,” which is a curving figure borne on a heraldic shield or coat of arms. 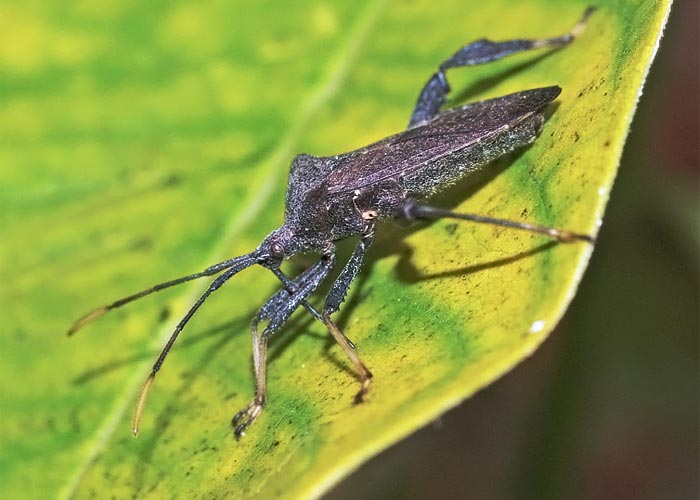 The males of some species of L-fBs are armed with massive, spiked (often battle-scarred) thighs (femurs) that they whack each other with when in combat over females. L-fBs have a lot of parallel veins on the membranous part of the front wing. Most are herbivores, using their impressive mouthparts to pierce plant parts and suck out the juices. Several wasps are parasites on L-fB eggs, and a tachinid fly that lays its eggs on adult Hemipterans is considered a biological control. L-fBs are good—if noisy—flyers. 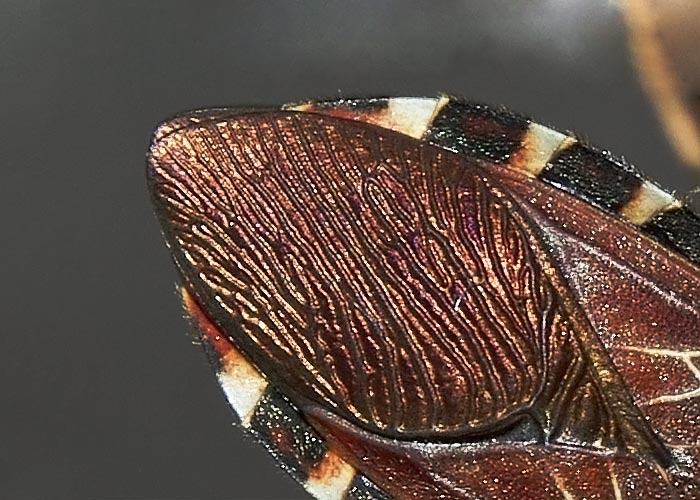 Coreids, both young (nymphs) and old (adults), come armed with a defensive scent gland in their thorax. The gland opens into a pore on each side of the thorax, near the base of the third pair of legs. The odor is described as “foul,” “sharp,” and “strongly odorous.” Eisner, in Secret Weapons, writes that special valves control the emissions (coarse droplets) through the pores, and that the cuticle around each pore is roughened to ensure that when droplets are released, they will coat the sides of the insect, too, giving long-lasting protection. The bug can let fly through the left or right pore or through both pores simultaneously. As the nymphs, which are wingless, mature, the location of the pores shifts from the dorsal (top) side of the abdomen to the lower thorax. If the pores stayed on the bug’s back, they would be covered by its adult wings. The scent makes no difference to birds, most of which have no sense of smell.

After some pretty intense picture-keying, resulting in one complete identificational 180 degree turn, here is an alphabet soup of L-fBs—HSBs, ATs, WCSBs, and F-lFs, three leaf-footed bugs and a predator from Southeastern Wisconsin.

Bachelor #1 is (the BugLady hopes) Euthochtha galeator, the Helmeted Squash Bug (HSB). Galeator is Latin for “wearing a helmet,” but the BugLady isn’t sure why this species looks any more helmeted than other Coreids, unless “helmeted” refers to the hunch-backed/hidden head look. HSBs hang out in fields, prairies, hillsides, road edges, thickets, and wooded or shrubby edges in the eastern half of the U.S. 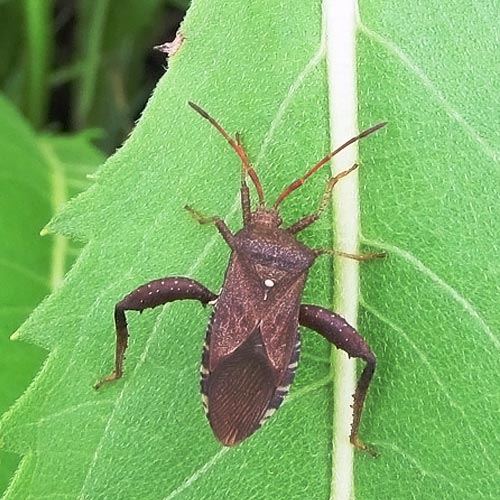 HSBs are plant feeders, piercing and sucking both cultivated and wild plants. They can be hard on your roses, feeding for a long time without moving and so causing deformed flowers and limp leaves. Wild foods include grasses, sumac, composites, mints, and some young trees. The BugLady can say with certainty that the prickly-looking nymph in the out-of-focus picture is a HSB nymph, because the third segment of its antenna is widened. The nymph shown here was sticking pretty close to a blob of bird droppings on a prairie dock leaf. HSB nymphs often feed in groups. 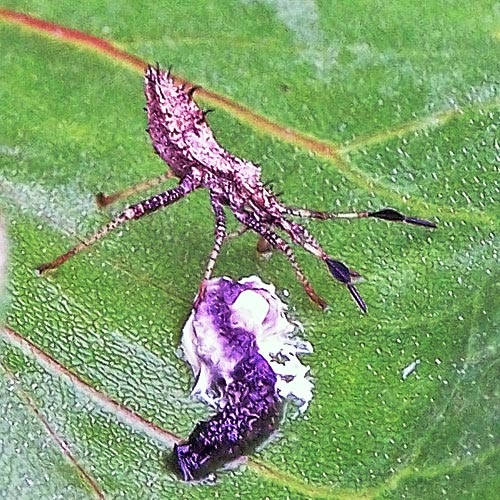 In addition to the bad-smelling defense chemicals in their thorax, male HSBs and Bachelor #3 (and its relatives) also concoct good-smelling stuff. Glands at the rear of their abdomens crank out volatile, “aromatic” compounds which, depending on the species, smell like roses, cherries, vanilla, cinnamon, and more. It’s hypothesized that these “colognes” make males more competitive and prevent hybridization.

Bachelorette #2 is Acanthocephala terminalis (AT), for whom the BugLady could not find a common name but could find a translation of its scientific name. Acanchocephala means thorny head, and terminalis refers to the different-colored tip of the antenna. This is the only species of Acanthocephala north of the Mason-Dixon Line. ATs live in fields, woodlands and edges in the eastern U.S. (the BugLady photographed it in a sunny woods opening). 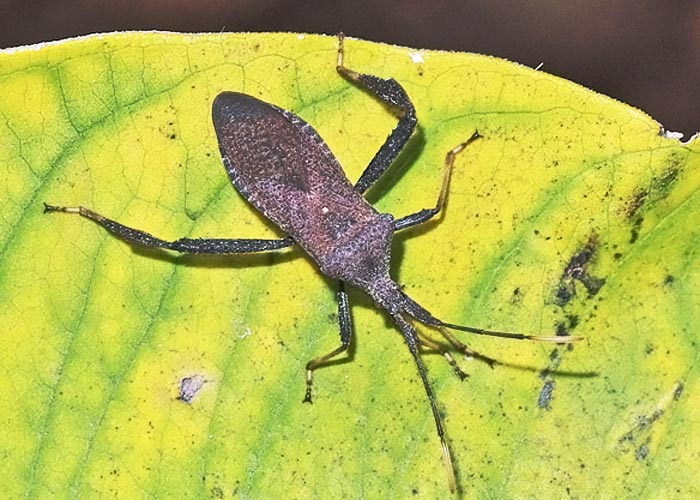 They feed on sumac, wild grape and nine-bark (whose name, German scholars please note, was originally “nein-bark” (“no-bark”), a nod to the way its flaking outer bark exposes the “bare” inner bark). They aren’t considered pests. There’s some speculation that Bachelor #2 might ingest nutrients from bird droppings, and the BugLady found a tantalizing reference to an abstract about ATs associated with Screech Owl droppings. 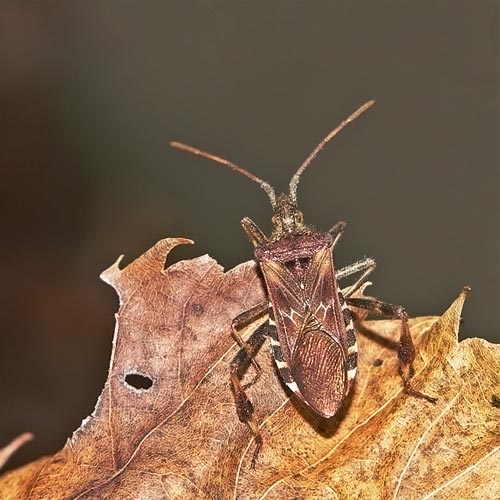 The colorful Bachelor/Bachelorette #3 is the Western Conifer Seed Bug (Leptoglossus occidentalis), called the “walky bug” in Ohio for its slow, deliberate pace. The Western Conifer Seed Bug (WCSB) originated in the West but has successfully moved east as far as New Brunswick (about as far East as a bug can go and still be on this continent). It’s a recent import to Europe (1999), Turkey (2009), and Japan (2008). Within its range the WCSB is found on a wide variety of conifer trees. It lays its eggs in neat rows on their needles; the nymphs and adults feed on sap of the needles, flowers, scales of young cones, and later, the seeds, sometimes affecting the development of seeds. Though WCSBs are harmless to healthy trees, affecting only the seed production, foresters don’t like them.

WCSBs are notorious for overwintering in houses. There they are harmless to man and beast—and to houses, house plants, food, and fabric—and they don’t lay eggs inside. Outdoors, look for them under tree bark or in rodent and hawk nests in winter. 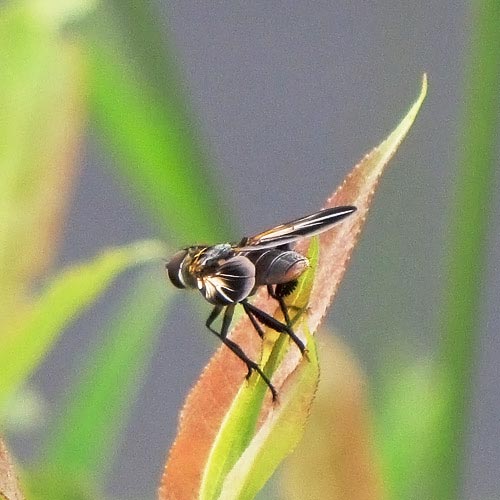 Bonus Bachelor/Bachelorette: a very spiffy tachinid fly called the Feather-legged Fly (Trichopoda sp.). If you take a peek on bugguide.net at pictures of the three bug species above, you’ll note that many of them are sporting a small, pale egg or three on their thorax or abdomen. These are eggs of various parasites/parasitoids. The lovely Feather-legged Fly (FLF) pictured here is quite a departure from the usual hairy, lumpy tachinid flies. FLFs are native to the Americas and are found in meadows and prairies with blooming flowers. The adults appreciate the nectar in the flowers, and the females take the opportunity to deposit their eggs on the undersides of Hemipterans (True bugs, like stink bugs and L-fBs) that they find there. The fly larvae bore into their host’s body and proceed to feed on the host’s juices, growing big enough to fill the space allotted. The host dies as the larva exits just before pupating.