A little lagniappe from the BugLady.

Last night the BugLady was hanging out on the front porch with the June bugs and mosquitoes photographing this lovely creature. It is a sphinx moth called the Laurel or Fawn Sphinx (Sphinx kalmiae), and it’s around 3” long. Sphinx moths are also known as hawk moths because they are strong and fast fliers. They sometimes hover over flowers when sipping nectar; many fly in the late afternoon and are mistaken for small hummingbirds, and some night-flowering plants are pollinated by sphinx moths. The hornworms (as in the notorious Tomato hornworm) are Sphinx caterpillars. Sphinxes don’t spin cocoons, they pupate in a cell they make for themselves just underground. The caterpillar of the Laurel Sphinx eats plants in the olive family, like lilac and ash. 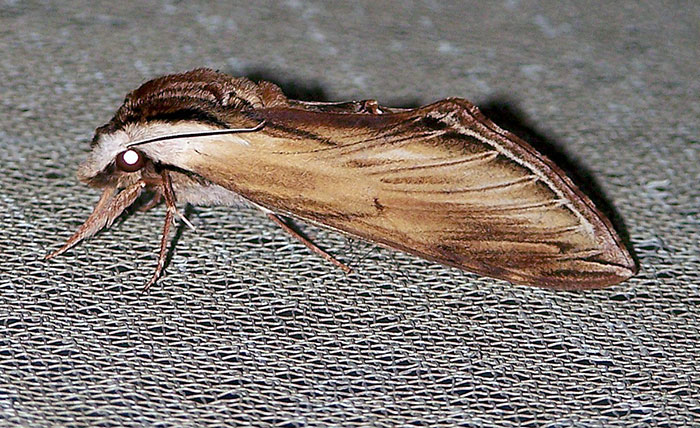 Named, no doubt, after Peter Kalm, the fascinating Swede who came to North America just before 1750, observed the land and its people (both natives and newcomers), explored, and sent plants back to Karl Linnaeus. Linnaeus recognized him by bestowing several other “kalmii’s”—the bog lobelia and the mountain laurel. Fellow history geeks take note, Kalm’s journal, Travels in North America, was published by Dover in two parts.

It’s spring, and there are many bugs around, and the BugLady has quite a BugBacklog. Brace yourselves.

(It’s in the dictionary, look it up.)