These are not your grandfather’s ladybugs. One is a newcomer that hails from the Orient (and your grandfather may never have seen one). The tiny one reverses the usual ladybug color pattern, and the last one is, well, pink (but sometimes red).

Ladybugs are not Bugs (order Hemiptera). A more appropriate name is lady beetle or ladybird beetle, order Coleoptera, family Coccinellidae. It seems that back in the Middle Ages, the European grape crop was threatened by a horde of aphids. Adult ladybugs eat aphids, and larval ladybugs eat aphids, and lady beetles rode to the rescue. After they saved the altar wine, the beetles were blessed by the Church with the name “Our Lady’s beetle.” In several European languages the word “ladybug” translates into “Mary beetle” or “Our Lord’s animal.”

Fast-forward to the 20th and 21st centuries, where aphids are still dining on agricultural and horticultural plants and ladybugs are still dining on aphids. Today, we call ladybugs “biological controls,” and we even import alien ladybugs to do the job, alien ladybugs like the smelly, highly gregarious, home-invading Asian Lady Beetle, which, for all its nuisance behavior provides an important check on aphids in apple and pecan orchards and maybe on the newly-arrived Chinese soybean aphids. 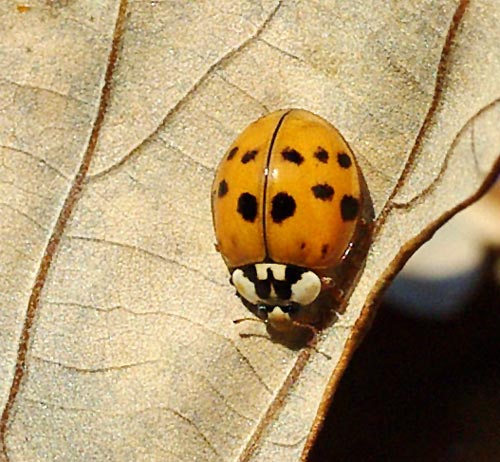 This episode is a textbook example of why BOTW is so much fun to write. The BugLady had pictures of these two odd ladybugs to research. When she decided to add some general natural history information about the Coccinellid family, she found out some very cool stuff about generic ladybugs, and they hijacked the episode.

Ladybugs are brightly-colored for the same reason Poison Arrow frogs are—their aposematic colors tell predators not to waste their time. Poking or prodding by a predator causes “reflex bleeding”—the LB oozes a bad-smelling alkaloid toxin from its leg joints (the alkaloid gives some people a runny nose and eyes, too). Some species can be identified by counting their spots, but others can’t—there are huge variations in colors and patterns, even within the same species. And no, a ladybug with seven spots is not seven years old; a lady beetle seldom gets to blow out the candle on its first birthday cake.

A female may lay as many as 1,000 eggs over a few weeks, usually near aphid herds. Some of the eggs are fertile and some are not. If aphids are scarce, the sterile eggs serve as food for the larvae (which are universally described as “alligator-like”). LBs of all ages eat small, soft-bodied invertebrates and some also graze on pollen. They overwinter as adults.

The late, great entomologist Thomas Eisner, professor of Chemical Ecology at Cornell, spent his life observing invertebrates and asking “Why?”, “Why not?”, and “How?” He called it “biorationality”—if you know what an organism’s challenges are, and you know how its relatives handle things, you should be able to figure out what/why/how its responses are. And if the expected defenses are absent, things can really get exciting. One area he was interested in was the way insects protect themselves during their egg and pupal stages, when they are immobile and vulnerable. Insect eggs are often protected by noxious chemicals in the egg shell or in the larva itself, and pupae are often, but not always, camouflaged, concealed or encased.

Eisner was a fan of ladybugs, which pupate right out in the open. They attach to a stem or leaf (the BugLady doesn’t know whether they use silk or glue or some kind of clasper), and split the skin down their back, revealing the pupal case beneath and wearing the pleated, shed skin around the attachment point. There they slouch for about a week, head up, like tiny Buddhas, exposed in photos on the Nature, Cultural, and Travel Photography Blog.

If a wasp shows up with parasitism on its mind, the LB pupa will wave its top end back and forth, making it difficult for the wasp to land. What Eisner observed next was even more amazing—the pupa can “bite” (pinch) with “functional jaws” on its back back (Eisner called this arrangement a “gin trap”)! The margins of the four wide gaps/clefts between the abdominal segments are armed with tiny teeth (fore) and a smooth, sharp edge (aft). When a pupa is touched by a predator like an ant, it rears straight up and the gaps close, pinching the anatomy of the predator.

Meanwhile, the pupa is performing an amazing feat of dexterity—it’s flipping itself over. It may start out with its head up, but as the tissue gets liquefied and rearranged within the pupal case, the adult beetle ends up head-down.

The exquisitely tiny (about 4mm long), native gem, the Orange-spotted Lady Beetle (Brachiacantha ursina (probably)) is found in North American forests and fields from the Atlantic to the Rockies. The U.S. has 500 species of Brachiacantha and the world has 4,500. Despite the differences in spot patterns of the individuals pictured here, the BugLady thinks they all belong to what Bugguide calls “the B. orsina complex.” Side note—there is a very-closely-related genus, Hyperaspis, that looks so similar that the BugLady has been on a merry chase trying to decide which this little critter is. She was tempted to flip a coin. Brachys means short and acanthi means “thorn,” and that describes a spine on the front leg that Hyperaspis doesn’t have. The BugLady loves their surprising blue eyes. 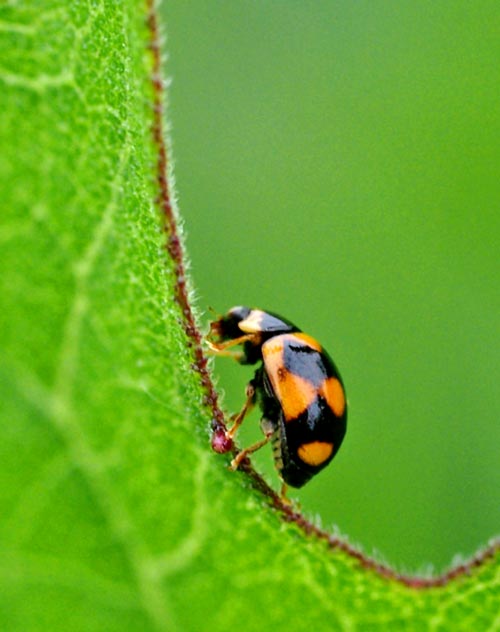 The larvae of several species of Brachiacantha, including the OSLB, are myrmecophiles (ant lovers). They don’t chase aphids around on the leaves above-ground, they live underground and are fed “domesticated aphids” by ants that otherwise keep aphids as a source of honeydew. The BugLady is not sure of what the ants get from this arrangement. Adult OSLBs hunt for mealybugs, scale insects and some aphids. Larvae of some species, including the OSLB, excrete white threads that give their bodies the same “feathery” appearance as the mealybugs they stalk. 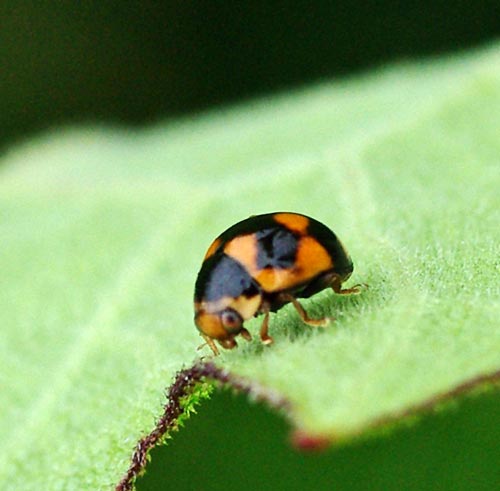 The Pink-spotted Lady Beetle (Coleomegilla maculata), AKA the Spotted Lady Beetle and the 12-spotted lady beetle, is the only species in its genus. It is a native ladybug that occupies much of the eastern half of the country and is often seen on agricultural crops. PSLBs are more omnivorous than their brethren. They eat crop pests like aphids, eggs of non-aphid agricultural pests like the European corn borer, and mites, but close to half of their calories come from nectar and pollen (they love dandelions). Farmers who want their help should plant early-blooming flowers among their crops. 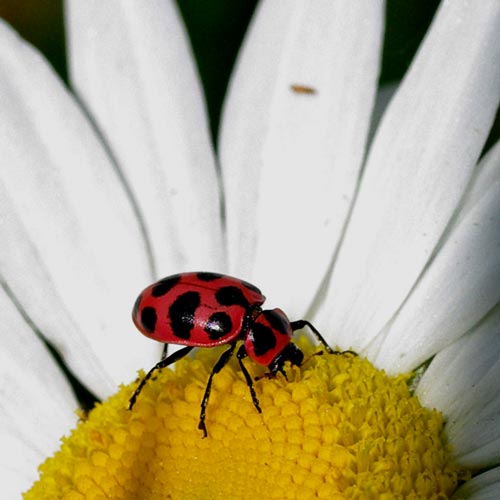 PSLBs begin to concentrate in fall, looking for a group of like-minded singles and for a sheltered spot to spend the chilly months (they wake in spring to eat some more and then lay eggs). In a feeding experiment, PSLB larvae were offered aphids, PSLB eggs, or both. Their response was “Pass the eggs, please,” and the little cannibals grew and gained weight faster than their more fastidious brethren.

Some species of native ladybugs are disappearing, possibly put out of business by the Asian ladybug. Check out Lost Ladybug Project for information about a great Citizen Science ladybug monitoring program (if you click on the “Ladybug Learning” tab, there’s a link to the Ladybug Song which was nominated for Children’s Music Song of the Year in the 2011 10th Annual Independent Music Awards).