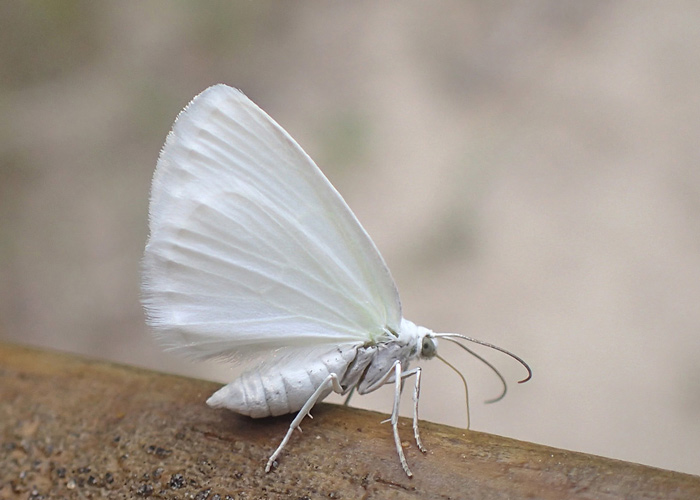 ‘…knowledge is a moth…the moths are the heralds, or better yet, the guardians of eternity…the moths carry a dust on their wings, a dark gold dust. That dust is the dust of knowledge…The moths have been the intimate friends and helpers of sorcerers from time immemorial. Moths are the givers of knowledge and the friends and helpers.’ – (Carlos Castaneda, Tales of Power)

Here (the BugLady looked up the collective noun for moths) is a whisper of moths. Mostly porch moths; mostly under-biographized; mostly, to borrow a term from birders, “LBJs” – Little Brown Jobs.

WHITE SPRING MOTH
This butterfly-like creature is a White Spring Moth (Lomographa vestaliata), one of four species in its genus in North America (a genus that includes the even-more-butterfly-like Bluish Spring Moth).

They are in the family Geometridae, whose “earth-measuring” caterpillars are called “inch worms” because of the way they arch across the terrain due to some missing prolegs in mid-body. They’re found in the eastern half of the continent. Larval host plants include apple, musclewood, viburnum, ninebark, and maple; they overwinter as pupae and adults fly in late spring/early summer.

BROWN BARK CARPET
Another Geometrid, the Brown Bark Carpet (Horisme intestinata) can be found in wooded/open wooded areas (and the BugLady’s former front porch) throughout the warmer months (if you can pick its cryptically-patterned wings out from the tree bark it often sits on). Some sources say that the larvae eat members of the Clematis family (of which the BugLady had none) and others say that the host plant is unknown [Editorial Aside – this guy was described in 1858 and is found across the country; this is 2019, and we don’t know this important fact about it and many other species].

Interesting species name, intestinata – the BugLady can only guess that the squiggly lines on its wings reminded its scientific describer of guts. The halo is the ring light on her point-and-shoot, reflected in the glass.

BRUCE SPANWORM
Such a soft-looking moth! The Bruce spanworm (Operophtera bruceata) is also called the Winter moth, a name already taken by a non-native and invasive member in the same genus that’s called the true Winter moth. It’s found across the continent, more north than south, in wooded areas (and the BugLady’s former front porch). Host plants include sugar maple, beech, and quaking aspen. This is one of those moth species whose females are wingless and so stay on/lay eggs on their natal tree, attracting winged males in late fall via pheromones.

Another Geometrid. Don’t know who Bruce was.

BOLD-FEATHERED GRASS MOTH
This beautiful moth is in the Grass/Crambid snout moth family Crambidae. Crambid caterpillars like to bore into stems and roots, and some are leaf tiers and leaf miners. This species, Herpetogramma pertextalis, is fond of about two dozen herbaceous plants like dock, goldenrod, red clover, nettle, burdock, violets, strawberries, plus a few plants in the potato family called ground cherries, and a few woody species. Plus ferns, apparently – this larva tied bracken leaflets together.

Jeremy Tatum, on the Butterflies and Moths of Southern Vancouver Island website, tells us that:

The caterpillar is to be found in untidily rolled up leaves of a variety of plants, such as Urtica or Rumex, from April to June. Their home includes a messy mass of frass. Like many “micros” the caterpillar crawls rapidly backwards when disturbed. It is translucent, and its recent meals can be seen working backwards inside it

An excellent name, since the BugLady tends to think of insect color phases as plumages.

BRONZY MACROCHILO
The BugLady thinks this is (probably) a small moth with a number of big names – the Bronzy Macrochilo/Streaked fan-foot/Chocolate fan-foot (Macrochilo orciferalis). Bronzy Marachilos are in the family Erebidae and in the subfamily Herminiinae, the litter moths, so-called because the caterpillars are often found on the ground, feeding in the leaf litter. Wagner, et al, in Owlet Caterpillars of Eastern North America calls their caterpillars “secretive,” and tells us that “four species [of Herminiines] have been reared from animal nests” (including gopher tortoises, BugFan Tom).

Males have feathery antennae, and females don’t. The Peterson Moth Book lists the larval food as “unknown,” but Wagner says they eat grasses and sedges (dead or alive) and blueberry (see Editorial Aside, above). The “snout” on this and the next species is formed by prominent, fuzzy palps, structures that sit on either side of the proboscis. They may protect the proboscis, but the scales and hairs that cover the palps (palpi) are also sensory and help the moth decide whether something is edible or not.

There must be a story about the name “fan-foot,” but even the BugLady’s venerable, century-old (Dover) Holland moth book did not give it up.

BLACK-BANDED OWELET
Kind of a spiffy little moth, in an understated way, the Black-banded Owlet (Phalaenostola larentioides) is also an Erebid and a litter moth, and like the Bronzy Macrochilo, it lives east of the Great Plains. The caterpillar’s diet includes grass, living leaves, leaf litter, and clover.

VIRGINIA CTENUCHA
This large, classy moth is conspicuous in the first half of summer on grassland flowers by day, but will also come to porch lights by night. In the field, it pops up and flies like a butterfly but then darts under a leaf and folds its wings – very un-butterfly-like behavior. Some species of Ctenucha moths are mimics of wasps and poisonous beetles, and so are left alone on flowers. Caterpillars eat grasses, sedges, and iris, and they overwinter in the larval stage, often taking little hikes on warm, winter days. Here are some nice life cycle pictures.

Virginia Ctenuchas (Ctenucha virginica) are in the family Erebidae and in the subfamily Arctiinae, but older field guides will find them in their own family or in the tiger moth family Arctiidae, which was folded into the Erebidae. Despite their name, their range is north-eastern-ish.

Don’t try to wrap your tongue around the “Ct” sound, just ignore the “C.”

National Moth Week is July 20 to 28 – check for a Mothapalooza at a natural area near you. Remember, butterflies are mostly flashier, but only about a tenth of the 180,000 species of Lepidopterans are butterflies.