Dragonflies again. The BugLady confesses to playing hooky recently (if going out and looking for insects is “playing hooky” for a BugLady), mostly surveying and photographing dragonflies.

Dragonfly ancestors came on the scene some 325 million years ago, and the BugLady is certain that people were admiring them as soon as there were people. They are woven into the fabric of myth and legend in many cultures and religions and have even been used for medicine and food (they may exact their revenge by transmitting intestinal parasites). There are dragonfly pictographs and petroglyphs, and they’ve inspired painters, poets, artisans, photographers, and writers.

What’s not to like? They come in a rainbow of colors and range in size from damselflies that are less than an inch long to hummingbird-sized darners. As in the dogbane leaf beetle, their iridescent and metallic hues are the result of physics – the play of light on tiny microstructures below the insect’s cuticle; other colors are produced by a full palette of pigments.

Quick dragonfly review: Dragonflies and damselflies are members of the order Odonata (“toothed ones,” because of their toothed labium or “lower lip”). Odonates are divided into two sub-orders – dragonflies, Anisoptera (“different wings,” whose front and hind wings are different in size and shape, and damselflies Zygoptera (“same wings”), whose four wings are similar in shape and size. Dragonflies tend to be bigger and bulkier than damselflies; their compound eyes wrap around the sides of their heads, and they perch with their wings at right angles to the sides. Damselflies are slimmer (our smallest dragonfly is actually shorter than many of our damsels but is much stouter); they hold their wings out to the sides in a “V” or fold them over their backs at rest, and their “bug-eyes” stick out to the sides of their heads like little knobs.

Odonates practice “incomplete metamorphosis,” which means that young Odonates come out of the egg looking somewhat like the adults they will become (admittedly, the resemblance of young to adult is harder to see in a dragonfly than in a grasshopper, which also has incomplete metamorphosis). The young (naiads) are aquatic; when they are ready to emerge, naiads climb out of the water, split the “skin” on the back of the thorax, and climb out. They deploy fluids (hemolymph) to lengthen and harden the wings, and some are able to take to the air in as little as 45 minutes.

They eat flying insects (think “Mosquito Control”) and may feed far from water, but the shore is where the action is. Although they are exquisitely fierce-looking, dragonflies are harmless (though a dragonfly in the hand may probe your fingers with its abdomen tip).

About those myths and legends. In general, Asian and Native American cultures are more inclined to view dragonflies positively than Western civilizations. Dragonflies symbolize strength, courage, prosperity, good luck, success in battle, and harmony in various Asian countries. Interesting side note as the meadowhawk season heats up — according to one source, the Japanese believed that red dragonflies carry the souls of departed ones. For Native American tribes, especially in the southwest and Great Plains, dragonflies represented purity, swiftness, happiness, transformation, healing, invincibility, and fresh water, and their presence was linked with the success of the corn crops (killing one was taboo in several tribes).

In Europe, dragonflies were called devil’s darning needle, ear-cutter, horse stinger, eye-poker, eye-snatcher, and adder’s servant/snake doctor (because they follow snakes around and tend to their wounds, stitching them back together if needed). Dragonflies sewed shut the eyes, lips and/or ears of people who told lies or swore or scolded, and they were believed to be in association with the Devil to weigh/harvest people’s souls (these beliefs seem to have traveled to places that the Europeans subsequently colonized, like America). Check Dragonfly Woman’s blog to find out about five bits of dragonfly folklore.

Here are some recent pictures.

Ebony Jewelwing — females have white spots at the wingtips. 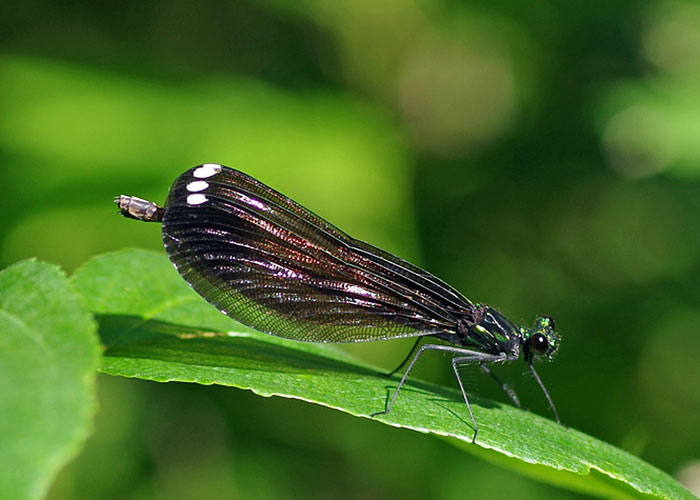 American Rubyspot — almost hidden at rest, the male’s ruby spots flash in the sunlight. Along with Jewelwings, they are “river damsels”—found near running water. 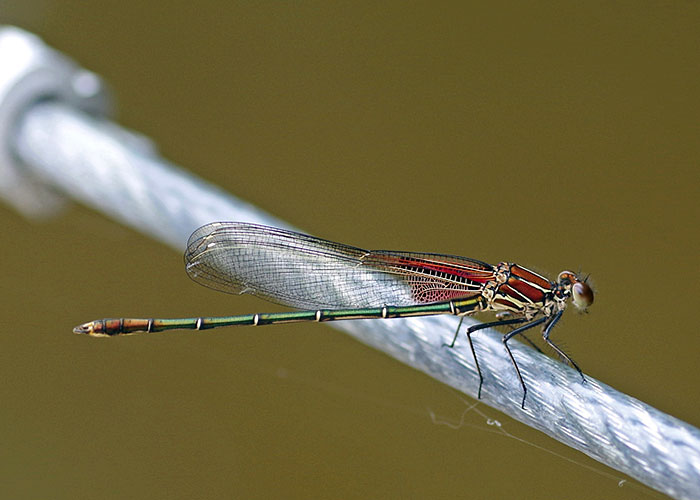 Emerald Spreadwing — the spines on her legs help her nab her prey. 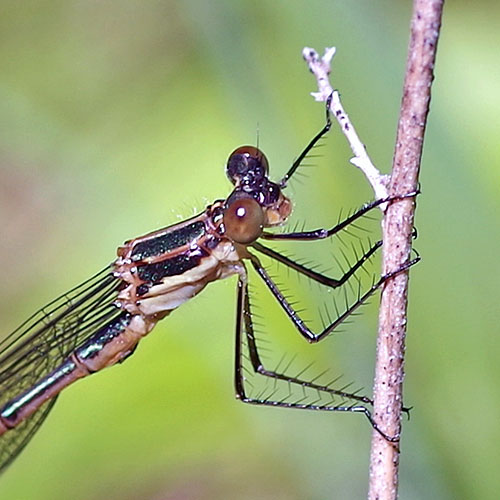 Violet Dancer — what an amazing color for an insect! 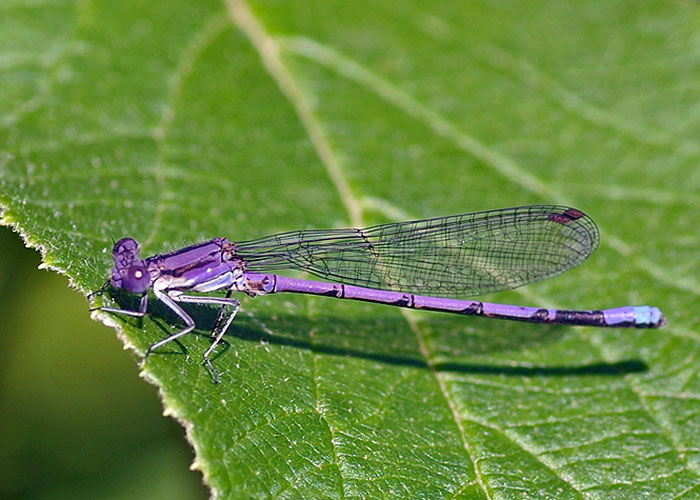 Powdered Dancers ovipositing — females oviposit in plants below the river’s surface, sometimes completely submerging to do so. The river is wide and the current is fast, and impossibly, there they are. 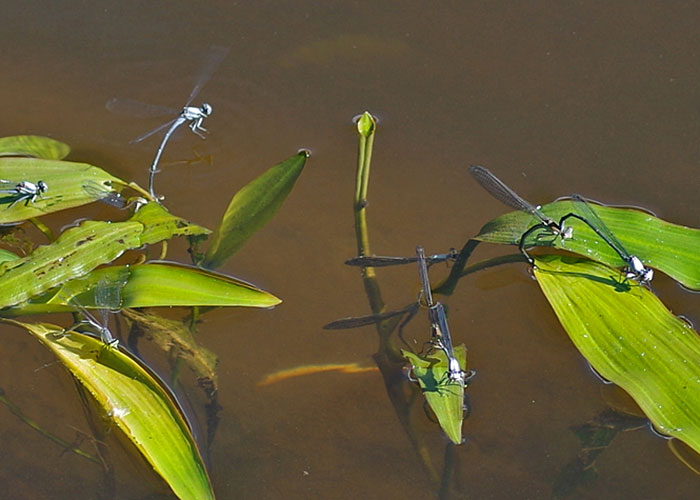 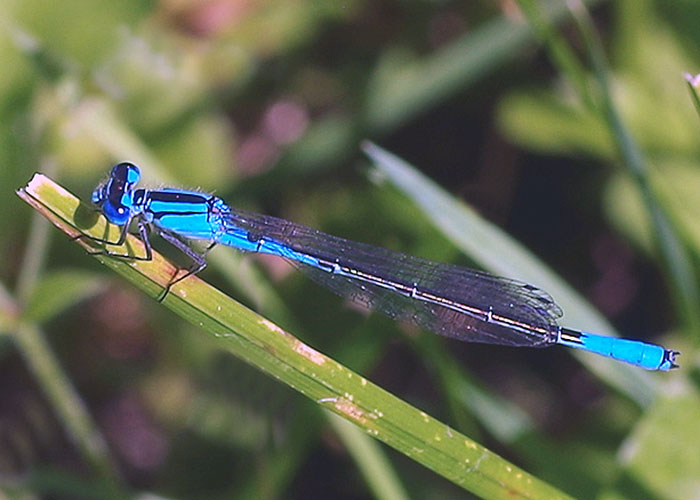 Common Green Darner — one of the canary-sized dragonflies, it patrols above the grass tops on the prairie and over the water, and it may form dramatic feeding and migratory swarms. 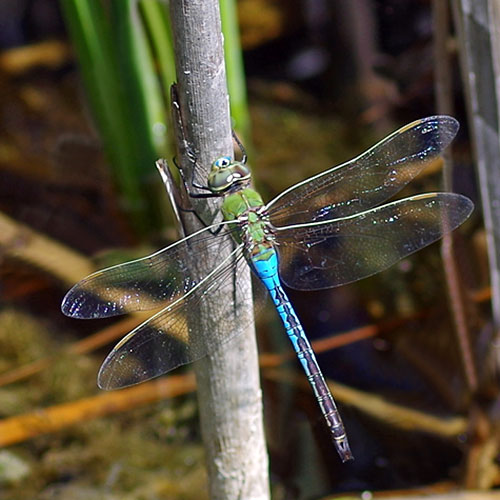 Lilypad Clubtail — what amazing eyes, and it’s even on a lilypad! 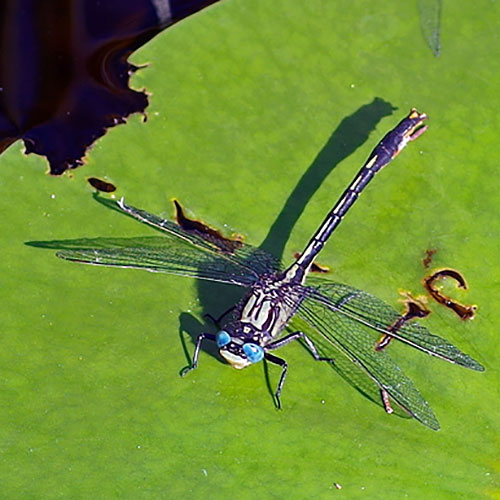 Common Whitetail male — the poster child for pruinescence, it’s abdomen is dark as a juvenile. 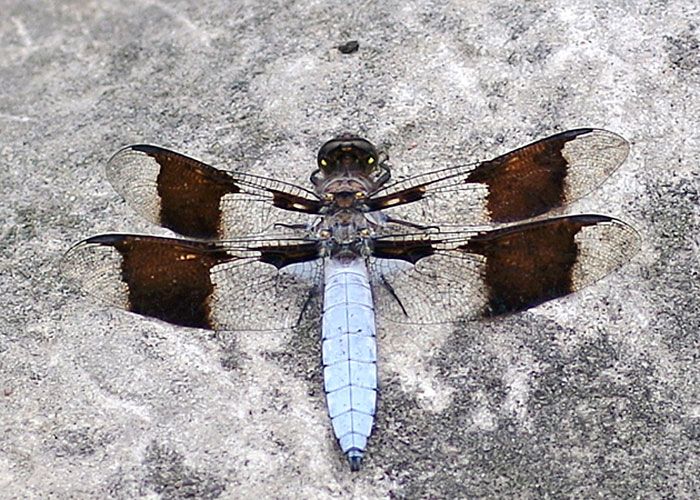 Slaty Skimmer — very classy! Slaty Skimmers are slowly extending their range into Wisconsin, present in only a few counties. 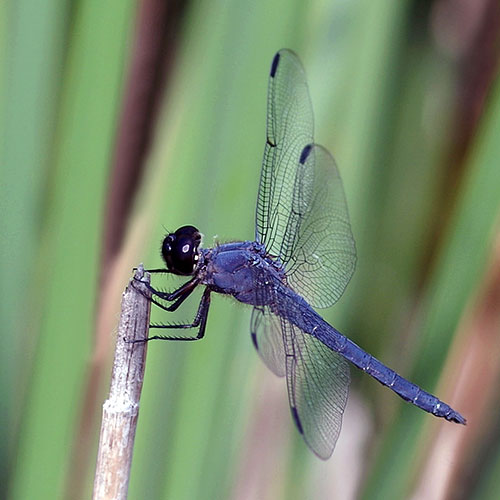 Blue Dasher — sometimes called the peacock of the dragonfly world. It chases the Slaty Skimmer around the shore. 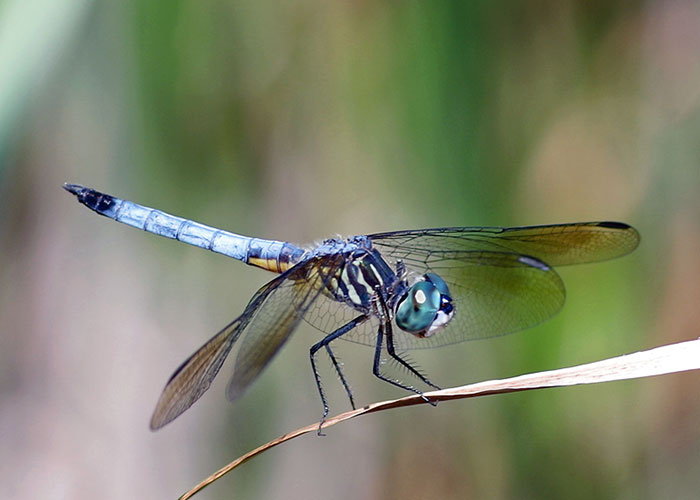 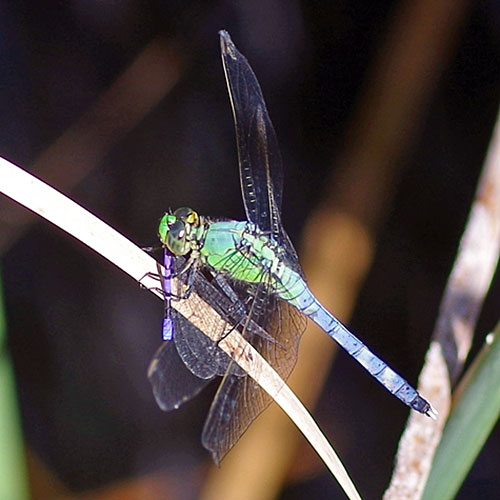 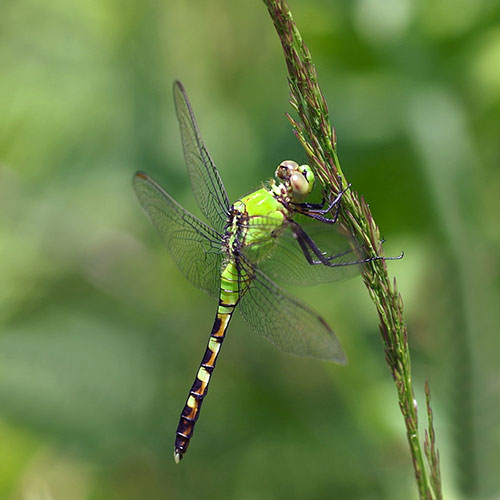 Calico Pennant — “pennant” because they like to sit on grassland plants, streaming off the top like a small flag. 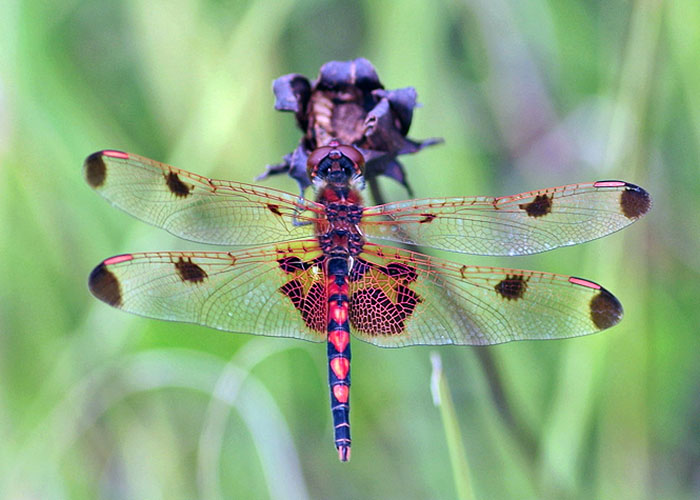 Halloween Pennant — each of those compound eyes is made up of thousands of simple eyes. 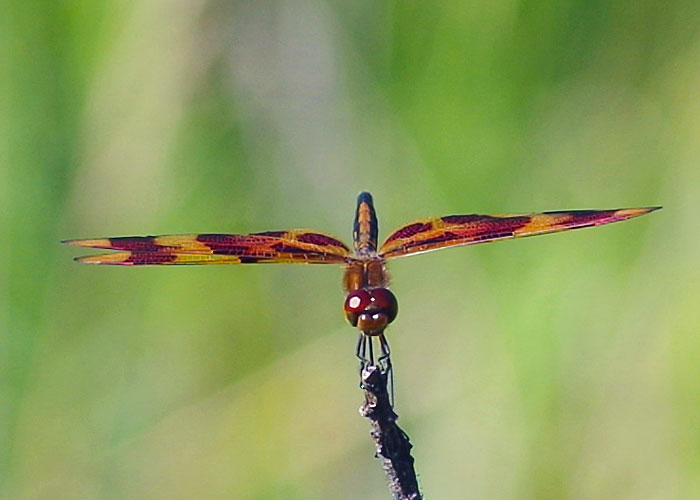 Ruby Meadowhawk — females and young males are amber; older males practically vibrate with color. There are several species of meadowhawks, and they’re everywhere these days, and will be with us through fall. 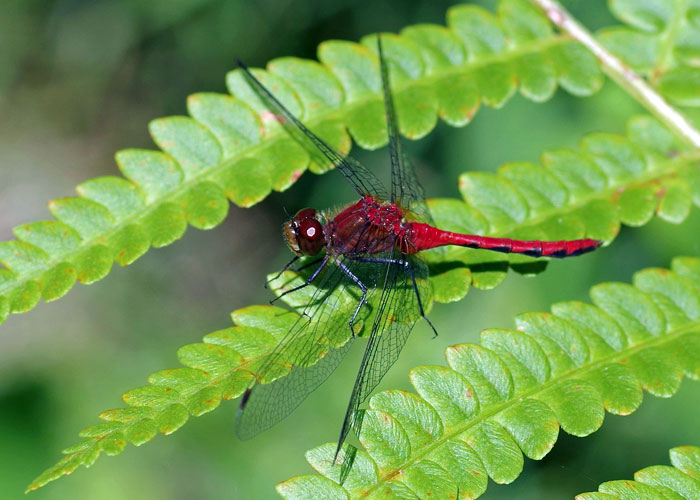 With apologies to J.B.S. Haldane, who speculated that God must have an inordinate fondness for beetles.

Go outside – find some dragonflies.