Scientists around the globe have been studying the heck out of the Imported Willow Leaf Beetle, a.k.a the Willow Leaf Beetle (Plagiodera versicolora) (which is, not surprisingly, in the Leaf beetle family Chrysomelidae). These northern European natives reached our shores in 1915; they’re common in the eastern half of the U.S. (there are scattered reports in the West) and north into Canada. Scientists in a number of European countries are scrutinizing them, and there’s also a fair amount of research being done on them in Japan, where these little immigrants are apparently unappreciated. IWLBs are tiny (less than ¼ inch), metallic-blue-green beetles that, as both larvae and adults, eat willow and poplar and often feed in groups.

Adults overwinter in bark crevices or on the ground in leaf litter, and they leap into action when trees begin to leaf out. After munching on a few spring greens, females lay bunches of yellow eggs on the undersurfaces of leaves—up to 750 eggs, in “clutches” of about 50 eggs each. The eggs hatch quickly, and a few days later, herds of larvae can be found skeletonizing leaves from below—eating the tender, green tissue between the veins. Older larvae will feed on the leaf’s upper surfaces, too. Mature larvae “go walkabout” for a brief spell before picking a spot to pupate. There can be several generations per year, but by early fall, the adults of the final brood start tucking themselves in for the winter. 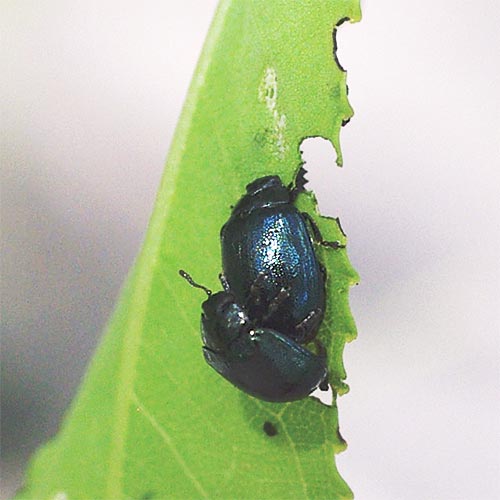 The sleketonized/semi-skeletonized leaves turn brown, but unless a tree has a heavy infestation for several years in a row, the threat they pose is more cosmetic than deadly. If it has fed a lot of larvae, a tree may look scorched by August, and its leaves may fall early. The adults eat the same food plants as their larvae, producing holes or notches in tender, new leaves.

IWLBs have some natural enemies in the forms of parasites and parasitoids, and a few predators like Asian Ladybugs, which eat IWLB eggs, and Assassin bugs, which eat the larvae, but the ministrations of these bugs doesn’t seriously dent the IWLB population.

Scientists around the globe have been studying the heck out of the IWLB. What have they discovered? Here are a few IWLB FAQs, based on some of the many research projects in which they’ve starred: 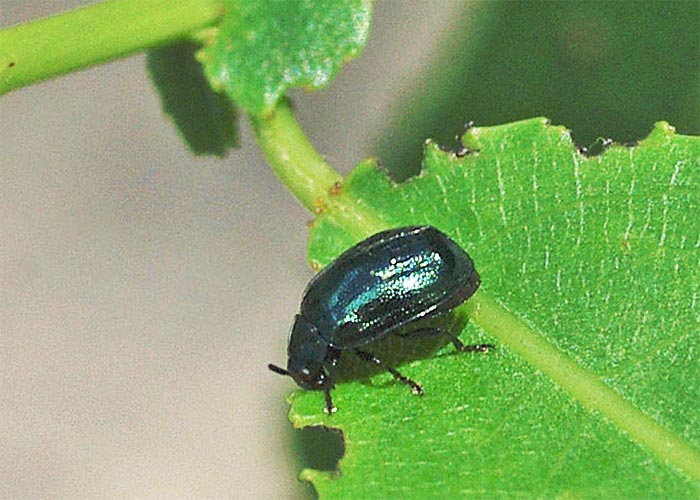 The P. versicolora larva upgrades its response in accord with the intensity of the stimulus. If the larva is seized bodily with forceps and lifted off the substrate, it is likely to evert all glands at once. If, however, it is subjected to a localized stimulus such as the pinching of a leg, it may restrict its response to the eversion of the glands closest to that leg …Typically, following the cessation of the stimulus, the glandular sacs, together with the extruded droplets, are pulled back into the body. Loss of secretion is thereby held to a minimum.

The secretion of P. versicolora is potently repellent to arthropod predators… Interestingly, the P. versicolora secretion, in addition to deterring predators, may have repellant effects on competing herbivores that feed on the same plant.

More that you ever realized that you wanted to know about IWLBs. There will be no quiz.