Ichneumons—what an amazing bunch! First-off, there are a whole lot of them. The numbers are a little soft, but the 5,000 species listed for North America might eventually be joined by another 3,000 that are awaiting discovery. Worldwide, there are an estimated 60,000 species, and that could grow as high as 100,000—even low-balling it, they are considered to be the largest single family of animals (not just insects—animals) in the world. Second, while some Ichneumons are very small, many are large and beautiful insects.

Ichneumon comes from the Greek word meaning tracker, a reference to their search for host for their young. Common names include “ichneumon fly” and “scorpion wasp,” though they’re related to neither flies nor scorpions.

They look wasp-ish, and they are in the Order Hymenoptera, but they are in the Family Ichneumonidae rather than being grouped with the familiar stinging wasps. Females may have much more spectacular ovipositors than do the stinging wasps (females of some of the larger Ichneumon species do sting if provoked, but males are defenseless). As a group, larvae of the Ichneumonids are parasitoids of their fellow arthropods, and they are often quite specific about their prey. Some help control pests.

Somewhere along the way, evolutionarily, some family members started carrying and transmitting to their offspring an odd virus called a polydnavirus (PDV), which is delivered into the host’s body when a female oviposits within it and which suppress the host’s immune system so that it doesn’t reject the wasp larva.

Ichneumon centrator (no common name) is about ¾” long. Females are black with smoky wings, reddish-brown accents on the thorax and head, mostly-pale antennae, and dark yellow bands on their legs. Males are black, with pale antennae; they look a lot like the BugLady’s nemesis wasp, Gnamptopelta obsidianator (or, alternately, like one of the larger Spider wasps). Gnamptopelta, whose name means “bent-shielded besieger” and who is twice the size of I. centrator, shoots across the BugLady’s bow into a thicket several times each summer but does not stop. 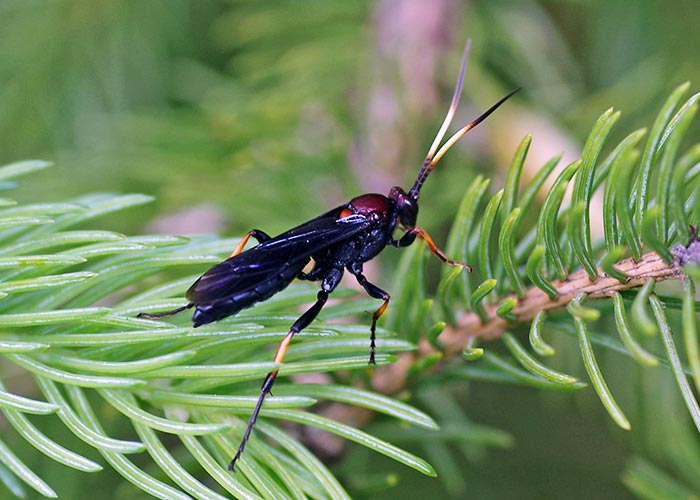 There are about 145 members of the genus Ichneumon in North America, and they specialize in moth and butterfly caterpillars. They oviposit in late-instar larvae, and the wasp larva develops within the host’s pupal case. Only one host species has been identified for Ichneumon centrator, and it’s the larva of the Isabella tiger moth, famously known as the Wooly bear caterpillar.

Like many other ichneumons, the female Ichneumon centrator overwinters as an adult (male I. centrators die in fall, and there is only one generation per year). She is picky about her hibernaculum, often choosing a spot under bark that is still snug on a fallen tree. She favors a north-facing slope or a low area where the humidity is high but the temperature won’t vary much throughout the winter. Scientists suspect that pheromones left by already-hibernating females may guide other females to good hibernaculum sites, which results in clusters of hibernating individuals. As usual, the insects’ senses are more finely tuned than those of the scientists who study them—in an Ohio study of hibernating wasps, some areas that researchers thought looked suitable for wasps were empty of them.

She is fertile when she enters hibernation, carrying sperm stored in a receptacle called a spermatheca. The arrangement allows her to effect fertilization of her eggs when she wakes in spring to search for wooly bears, as soon as the temperature stays above freezing. The hardy wooly bears, who spend the winter as caterpillars and hike around during January thaws, also awake in early spring to resume eating before pupating.