Today’s BOTW, starring the ubiquitous house fly, is rated NftFoH (Not for the Faint of Heart). There’s a tremendous amount of material available about house flies (450,000 internet hits in 0.23 seconds). The BugLady will try to hit the high/low spots.

Status: “They’re everywhere, they’re everywhere!” If, anyplace in the world, a fly is conspicuously sharing your house (cluster flies tend to be more secretive), it’s probably a house fly. House flies (Musca domestica) may have originated in the Middle East, and they’ve been around for at least 65 million years. One source suggests that house flies arrived in the Americas with, or even before, Columbus (with Brendon the Irish monk in AD 550? The Vikings in AD 1000? Madoc the Welsh prince in AD 1170? The Basques in AD 1200? Or—according to one author—with the Chinese in AD 1421?) Given a choice, house flies pick warmer climes (with temperatures up to 100 degrees) over colder climes; in colder climes, they survive with the assistance of humans.

House flies are the image that pops into most minds when the word “fly” is uttered. Built on the basic fly chassis, they are dark, a quarter to a third of an inch long (females are larger than males), hairy, and sturdy, with two clear flying wings and two knob-like vestigial wings (halteres) which help a fly keep its balance in flight. Adults have a dark thorax decorated with 4 darker stripes, and the male’s abdomen is orange-ish. Each of their wine-red compound eyes (with which they can see motion, but not the color red) is made up of about 4,000 lenses. Their antennae help them detect air movement and odors. They can fly at speeds of 4.5 mph—brisk walking speed for us—and most live within a mile or two of where they were hatched.

What do they do for a living? OK, here’s where things get a little dicey. House flies have “sponging/vacuum-cleaner” mouthparts (some flies, like deer flies, add piercing to their mouth-parts repertoire). The food of adults is described delicately as “moist, decaying organic matter” and includes decaying plant material along with all manner of liquefied bodily by-products. They are especially fond of sugars and proteins. In service of the “liquefied” part, they “pre-digest” solid food by spitting/vomiting some of their previous meal on it and then sucking the softened mess up again. House flies walk on their food, spit on their food, and poop on their food, and then they fly away and repeat the process on another food source. Or your hot dog bun.

Their love life does not inspire ballads. In order to produce eggs, a female needs a good protein meal and a guy (in that order). After minimal courtship, she mates only once, stores sperm for the future, and may lay several batches of eggs over the next few weeks (she can produce up to 500 eggs). Poop and garbage are her favored repositories for her eggs. Poop and garbage are what her kiddos eat. The larvae/maggots are white and legless.

After about a week of feeding, the larvae/maggots pupate. Adults live for two to four weeks after they emerge. When you see an especially small house fly, it’s one that didn’t get enough to eat as a maggot. It’s stunted, and it won’t grow any more as an adult. Since they can squeeze their whole life cycle into as little as one or two weeks, house flies can pull off 12 generations a year here in God’s Country and 20 near the equator. 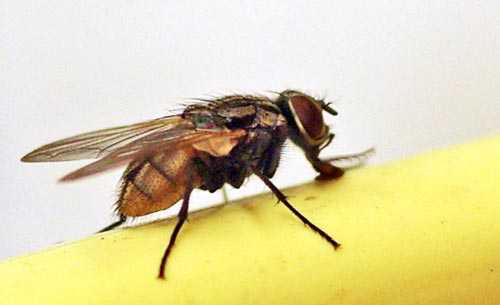 The larvae, because of their relative immobility, are described as “medically harmless.” Though the adults feed on similar substrates they are, because of their mobility, considered serious pests capable of spreading parasites like tapeworms, and major diseases like TB, anthrax, salmonella, polio, cholera, viral hepatitis, and typhoid fever (but hey, they don’t bite!). This pretty much explains their status on World Health Organization Most-Wanted posters. They pick up “germs” from the surfaces they walk on, and transfer them to their mouth and body surfaces during the process of grooming. Fly-borne diseases are not common in the U.S. but are a huge deal in countries where cattle and other hoofed animals wander freely and leave their calling cards and where sanitary systems are primitive.

There is no end to the ingenuity displayed in the control of house flies—an endless variety of fly traps, fly paper, pheromone-baited fly traps, light traps and zappers, and an array of chemicals, both adulticides and larvicides have been deployed (flies quickly develop mutations that make them immune to the chemicals, but humans don’t). but, in the cause of disease prevention, cleanliness is next to godliness, and good sanitation measures trump most other schemes. The cleaner your community is, the cleaner its flies. In addition, a whole slew of animals eat or parasitize house flies, including birds, amphibians, spiders, dragonflies, and the black dump fly, a house fly look-alike whose maggots eat their cousins.

The modern fly swatter was invented in 1905 by Frank H. Rose, a Kansas schoolteacher inspired by the anti-house fly efforts of Dr. Samuel J. Crumbine. Rose attached a piece of screen to a yardstick and called it a “fly bat.” Dr. Crumbine renamed it the fly swatter to fit with his “Swat the Fly” campaign (he also lead “Bat the Rat” and “Don’t Spit on the Sidewalk” crusades). For two vintage 1912 anti-fly propaganda pieces, go to Wikipedia. In the “external links” section at the bottom of the page, click on:

It’s easy, from a distance of 100 years, to poke fun at these earnest efforts; we need to recall that in the pre-antibiotic era, minor conditions could and did go south, overnight.

Some Cool House Fly “Facts” from the Internet:

The yellow background on the photos is a dinner plate. Which, of course, begs the question—“Just exactly how much fun is it to dine with the BugLady, anyway?”