Sharp-eyed BugFans may discern that, Toto, we’re not in Wisconsin any more! The BugLady took herself on a little road trip to the Delaware Bay recently, the home of the horseshoe crab. Because of their long and primitive lineage and their cute faces, horseshoe crabs grab our imaginations. There is also (as local newsmen like to point out, ad nauseam), a “Wisconsin Connection.” They are close relatives of Wisconsin’s beloved State Fossil, another ancient marine animal called the Trilobite. The story of the Atlantic Horseshoe Crab (AHC) stretches from the great extinctions of the Silurian Period to the unique threats of the 21st century. The operative question is whether an animal that has survived over almost a half-billion years of massive global climate change may join its extinct trilobite ancestor under our watch. 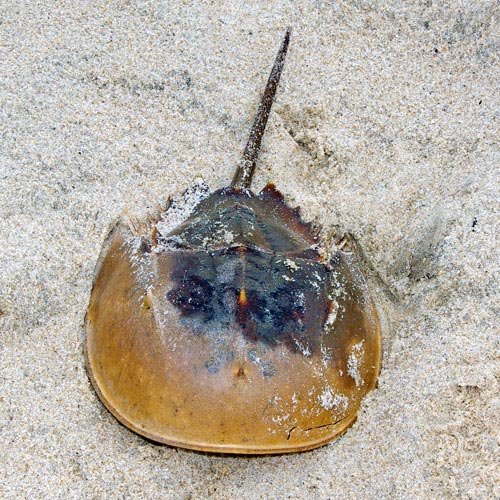 Horseshoe crabs fit (with spiders, insects, scorpions, real crabs, etc.) under the great Arthropod (jointed limb) umbrella, in the class Merostomata (legs attached to the mouth), in the order Xiphosura (sword tail), in the family Limulidae. There are four remaining horseshoe crab species in the world; three reside along the edges of the Orient, and the Atlantic Horseshoe Crab (Limulus polyphemus) (Limulus means askew, and the BugLady trusts that BugFans recall who Polyphemus was) hangs out from the northwest Atlantic coast through the Gulf of Mexico. It prefers shallow oceans with soft, mucky or sandy floors. Despite its name, it is not a true crab. It’s not an insect either, predating them by maybe 100,000,000 years, but veteran BugFans understand that the term “bug” comes with a certain latitude. 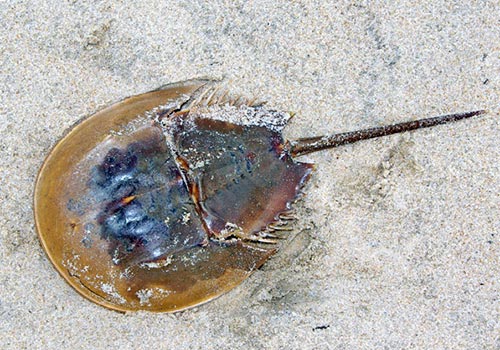 The fact that AHCs can survive dramatic changes in temperature and salinity and can fast for months (up to a year) helps to explain their longevity, and so does their decidedly tank-like physique. A hard, smooth shell makes them difficult for predators to handle, and the shell is a bulldozer which allows AHCs to dig into the sand/mud for prey. From above, they have three sections: a curved front shell, a trapezoidal middle segment that is hinged to the front shell, and a long, sharp tail that they use as a rudder and as a pry bar when they get flipped over. They can see potential mates from about three feet away with the large compound eyes located at the side curve of the front shell, and several centrally located simple eyes register UV light. It’s murky where they hang out, and the tail is also equipped with photo-receptors.

Flip one over, and your main impression is of legs. The first five pairs are for locomotion and for passing food to the mouth, which is indeed surrounded by legs. The final pair is adapted for pushing. Book lungs located behind the sixth pair of legs can help with swimming. 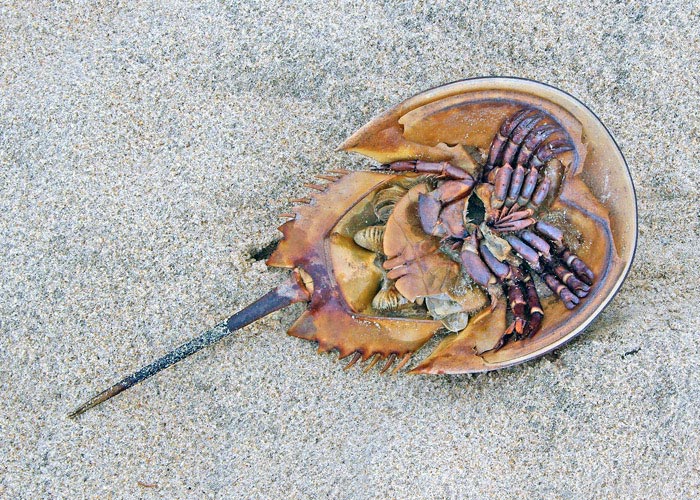 Females are larger than males; some females may measure two feet from stem to stern. When it’s time to breed, AHCs move into shallower waters. There is some suspicion that female AHCs are imprinted on the mud they hatched out of (males move around), but it’s not known what—or how—they sense in the mud. A female, with piggyback males, crawls up on shore. She lays her eggs a few thousand at a time (up to 120,000 total) in a depression in the sand, and the male fertilizes them externally. Wave action covers the nest. Eggs hatch in two weeks and the young (initially tail-less) head for tidal flats to eat and shed and burrow. They will molt six times, increasing their size by one-third each time they molt and reaching a half inch by their first birthday. After they blow out that first candle or two, they move to deeper waters. They molt once a year and reach sexual maturity in about ten years.

AHCs are armored but not invincible, and they face some unique modern challenges. They are vulnerable to predation (sea turtles eat adults, and so do gulls; fish and crabs feed on the eggs and newly-hatched young), habitat degradation due to the shoreline development, pesticide run-off, oil spills, and to being stranded during spawning. Humans harvest (and over-harvest) them—sometimes picking them off their spawning grounds. Originally AHCs were used for fertilizers and poultry food, and now they’re taken and chopped up as bait for conch and eel fishing. Females with eggs are most desirable bait, and it doesn’t take a brain trust to see where that road leads. In the 1960’s, researchers discovered that components of the AHC’s blood could be used to screen drugs and intravenous compounds/devices for the presence of certain bacterial contaminants. One-quarter million AHCs are caught, relieved of up to 1/3 of their blood, and released in order to harvest this blood chemical (a process that carries a 3% to 15% mortality rate). The shell can be used to make absorb-able sutures, treat certain eye problems, and speed blood clotting time.

Global Climate Change could be the straw that breaks the camel’s back. According to a U.S. Geological Survey study, the AHC may have been decreasing in numbers since the close of the most recent glacial period more than 10,000 years ago. As populations decline, so does all-important genetic diversity. Today’s warmer ocean temperatures and rising sea levels have caused the animal to extend its range north. The temperatures may be more favorable there, but the shorelines are rocky. Yes, they have already survived climate change on a scale we can’t imagine, but that ancient stressor is now joined by modern mortality factors that the original HCs couldn’t have dreamed of.

The food web to which AHCs belong is complex and their contribution vital. Their food supply, like the AHCs themselves, dwells in the mud and sand; they feed on clams, worms, a few small fish and crabs, and other invertebrates they find in the substrate. Rasps on their legs “pre-process” the food, and the AHC’s sand-filled gizzard finishes the job.

The Red Knot and some dozen other species of shorebirds time their spring migration from South American wintering grounds to coincide with the AHC spawning season. They arrive at Atlantic shore staging areas—irreplaceable way-stations in their 9,000 mile journey—with depleted energy reserves. After two or three weeks of gorging on AHC eggs, rich in calories, protein and fat (they graze from nests uncovered by wind and waves, leaving plenty of intact nests undiscovered), up to a million shorebirds continue their journey to the Arctic circle having doubled or tripled their body weight. In recent years, the AHC populations have fallen and so have the shorebird populations. And when an animal doesn’t reproduce until it’s ten, it takes at least a decade to recover.” Several Mid-Atlantic States have imposed moratoriums on harvesting AHCs.

Older AHCs collect quite a load of hitchhikers during their lives—impets, sponges, leeches, mussels, crabs, periwinkles, and other snails attach to the shell. As John Muir said, “As soon as we take one thing by itself, we find it hitched to everything else in the universe.”

According to Japanese folklore, warriors killed in battle were reborn as horseshoe crabs, eternally roaming the sea floor, celebrated in art and poetry. Eastern tribes of Native Americans harvested the AHC for food (the muscles in the second section), fertilizer (and they taught the Europeans this trick), for bowls made from the front part of the shell, and for the sharp tail, used as a tip for fishing spears. The rubbery eggs, roasted “in the shell” are a delicacy in some Asian cuisines, though the roe of one species contains a neurotoxin called TTX by scientists and “Zombie Powder” by practitioners of Vodou.

This is, by the BugLady’s count, Episode #200 in the BOTW series, not counting a dozen rewrites. Who knew, when this thing started in the summer of 2007, that there would be an Episode #200? Thanks, Patrick—you’ve kept me out of mischief.