As she approached it, the BugLady thought that this Horsemint Tortoise Beetle looked like a sowbug (but what self-respecting sowbug would be two feet off the ground?). The BugLady wrote about the more familiar Mottled Tortoise Beetle (family Chrysomelidae) two years ago, but this was a new one for her.

What a cool-looking beetle!

As the name suggests, Horsemint tortoise beetles (Physonota unipunctata) are horsemint specialists. That name is a bit deceiving, because although there are several species of horsemints (genus Monarda) out on the prairie, the Horsemint tortoise beetle is tied to a mint that isn’t generally called “horsemint”—Wild bergamot (Monarda fistulosa). Alternate common names for the beetle are the Bee balm, the Bergamot, and the One-spotted tortoise beetle (unipuncta means one spot, but the BugLady is not sure which spot that refers to, since the description of the species in bugguide.net says “three black dots on thorax”). This approximately half-inch-long beetle is found east of the Rockies in the U.S. and southern Canada, where its host plants grow (generally grasslands, probably gardens).

The beetles don’t stray from Bergamot—they eat it, both as larvae and as adults, mate on it, and the eggs are laid on the undersides of leaves. A larva’s first job after hatching is to chew through the leaf to its upper surface and then move up the stem to eat the higher (younger, more tender) leaves. For much of their larva-hood they are gregarious, later splitting into smaller groups and dispersing over the plant (or to nearby plants if they can find a bridge of leaves to walk across). 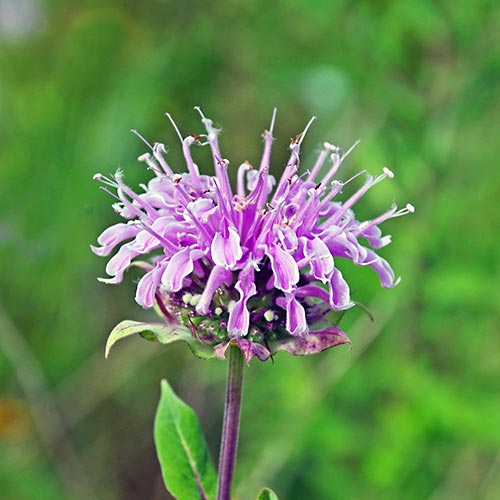 Tortoise beetles are famous for the fecal shields that their larvae construct from frass (bug poop) and exuviae (shed skins), impale tastefully on a forked structure on the end of their abdomen and wave around to deter predators (more about in the science-y portion of our program). The shield may grow to almost half of the larva’s body weight. See a great collection of pictures at http://bugguide.net/node/view/1118170/bgimage.

The science-y portion. Many plants produce poisons that dissuade herbivores, yet many insects use these unusable resources either by being really good at excreting toxins, or by sequestering the toxins somewhere in their body. Moreover, there’s evidence that toxic plants are favored by these uniquely adapted, insects because of their chemistry rather than in spite of it. Researcher Ken Keefover-Ring has been studying interactions between the beetle and its host plant. What has he found?