It’s a good thing that the common usage of the term “bug” is so inexact, because once again we are stretching its boundaries to/past the limits. Horsehair worms are in the phylum Nematomorpha. They’re skinny and long; this individual was maybe five inches long, but some species attain one or two feet (well, they don’t actually grow feet, but you know what the BugLady means). They have a hard chitinous covering which, says Ann Haven Morgan in her Field Book of Ponds and Streams, stiffens them so that “in their slow coiling and uncoiling they seem to be so much living wire.” They come in opaque yellow to tan to brown to black colors. They’re wiry and cylindrical, with little tapering at either end (unlike the nearby Nematodes). 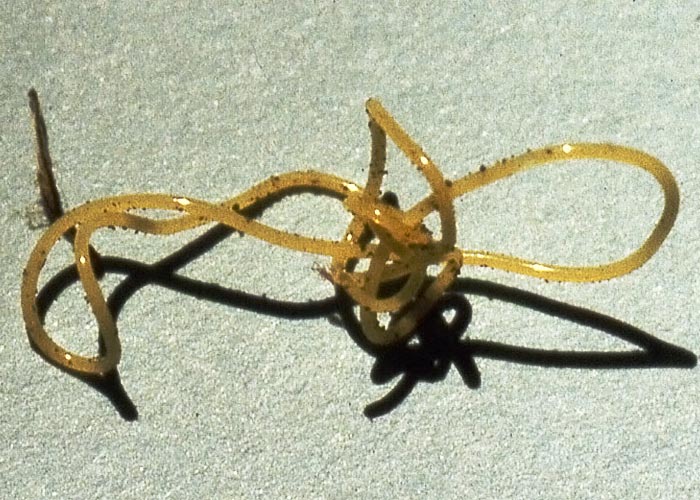 Adults live in damp-to-wet habitats from the tropics to the cold-temperate regions. Morgan goes on to say that they “lie like twisted roots or loose-coiled wire, on the bottom of brooks, springs, ponds, troughs, and rain-barrels.” Horsehair worms tend to occur in clusters; Pennak, in Fresh-water Invertebrates of the United States, describes them as “a single writhing mass in the springtime.” They look a bit like the snags the BugLady used to produce on her old casting reel.

The adults do not eat. Pennak says that not only do they have a “degenerate and functionless” digestive tract, they have “no special circulatory, respiratory or excretory structures” (and not much of a brain, either). Their muscle layer runs the long way, making them “slowly undulating swimmers.” But the simplicity of the adults is more than compensated for by their offspring.

Mom lays more than a million (!!!) eggs in a gelatinous string, maybe 8” long. The string breaks down into smaller pieces and disperses. When they hatch, the larvae soon attach to vegetation along the shoreline and form a protective cyst on the plant. They are inadvertently eaten (“engulfed”) by grazing grasshoppers, crickets and beetles (one source includes some mollusks and crustaceans all cold-blooded critters; these are not a public health issue). Once consumed, the cyst dissolves and Junior burrows into its host and begins dissolving and digesting the nearby tissue.

When they mature, they need to exit their host’s body, which doesn’t sound like a benign process. It’s best for Junior if the host is near water when this happens. One reputable source speculates that the maturation of Junior somehow causes the host to seek water. Other references said that if the host is nowhere near water when Junior matures, “c’est la vie”—few hairworms that mature in the bodies of grasshoppers ever get back to water. If the host is near water when Junior is mature/nearly mature, then Junior “breaks through/burrows out of body wall and becomes free-living.” Nature is careful of the species but careless of the individual. Nature has produced an exuberance of hairworms, and the system works often enough to keep the species going. An animal that produces that many eggs “expects” a high mortality rate.

A picture for your head: According to Morgan, a common species of hairworm reaches about a foot in length, and its larvae have been found in 2 species of cricket. If you’re wondering how they do that, the BugLady is, too.

These are also called “Gordian Worms,” in honor of the Gordian Knot tied by King Gordius of Phrygia, a knot that only the future king of Asia would be able to untie (Alexander the Great “thought outside the box” and used his sword). The name “horsehair worms” is a nod to folk tales about horsehairs which say that “a hair will turn to life if you leave it in water/in the town watering trough overnight.” (OK, the BugLady realizes that it’s been a few years since there was a town watering trough.)