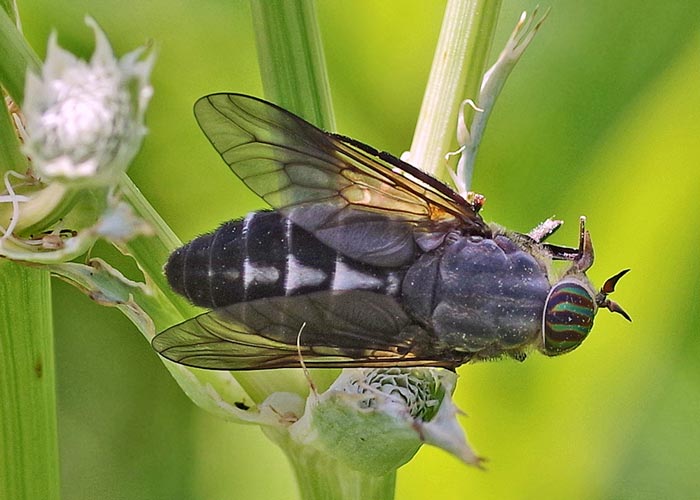 The first rule of finding insects is “Look on flowers.” Flowers provide a place to rest, as well as a place to eat and be eaten. The second rule is “if you see an insect that’s really still (or in an odd position), look for a predator nearby.” So, when the BugLady spotted a horizontal horse fly, she knew that something was afoot, and she soon located the ambush bug above and to the left of the fly (the fly’s eyes were a bonus).

Back in November of ‘aught-eight,’ the BugLady wrote briefly about horse flies in a survey of biting flies, click here to learn more. It’s a group that we love to hate, but hey, it’s December, and we can consider them cerebrally rather than emotionally.

Horse flies are in the fly family Tabanidae, which also includes the deer flies. One source noted that while both horse and deer flies buzz on approach (deer flies’ whine is higher-pitched), horse flies aim at bare skin below the knees, and deer flies like the back of your neck. The BugLady, whose field clothes are long pants and short sleeves, is going to have to mull that one over a bit. According to bugguide.net, colloquial names include “Bulldog Flies, Clegs, Yellow Flies of the Dismal Swamp, Greenheads, Gad Flies, and Copper Heads.” And undoubtedly other names that wouldn’t make it past the NBC censor. 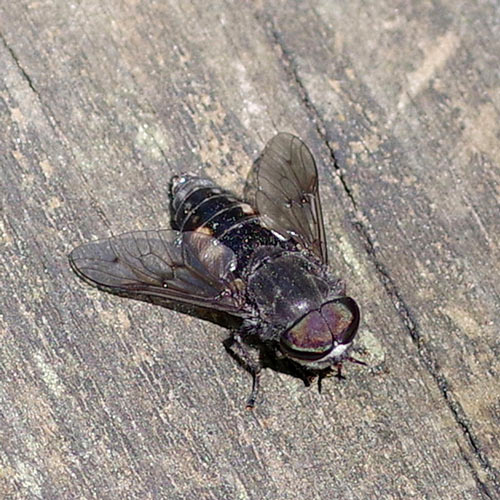 There are about 4,500 Tabanid species worldwide – 350 in North America. They’re found around the globe except for Hawaii, Greenland, Iceland, and the Polar Regions. Our most familiar horse flies are in the genus Tabanus (pronounced Ta-BAY-nus), which has about 100 representatives in North America. They’re often encountered around permanent wet/moist-lands because that’s where their somewhat aquatic offspring live, but they can be found from deserts to mountaintops.

Tabanids tend to be chunky flies, and some of them, at an inch-plus in length with a two-inch wingspan, are sizable. Their eyes are sometimes described as “bulging” (male flies have those huge, wrap-around eyes; females’ eyes are separated). Deer flies tend to be more colorful than the usually-drab horseflies (but read on). 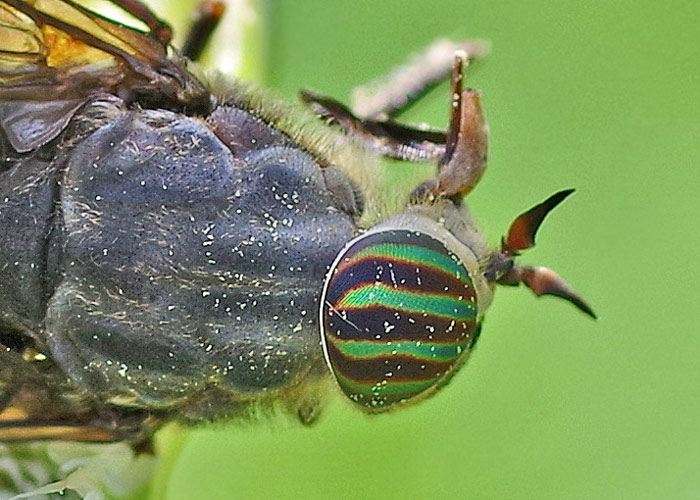 Male horse flies feed on nectar and pollen and don’t have the equipment to bite. Females drink nectar, too, but they also need a blood meal (mostly from a mammal) to help them produce eggs. So they ambush passers-by, zeroing in on large, dark-colored, moving objects that give off a cloud of CO2 (including motor vehicles, says Eric Eaton, in The Kaufman Field Guide to Insects of North America) (clouds of deer flies around the side mirrors of slowly-moving cars are a common sight in July in the habitats where the BugLady hangs out).

Wikipedia describes their mouthparts as “a stout stabbing organ with two pairs of sharp cutting blades, and a spongelike part used to lap up the blood that flows from the wound.” Anticoagulant saliva keeps the blood flowing, sometimes long after the fly has departed. Some females may need a second meal or are disturbed during the first meal, and it’s in biting a second victim that she may transmit diseases (the list of pathogens isn’t long, and human infection is rare here in Wisconsin). Some people are allergic to the bites, though, and cows that are under attack by Tabanids are not contented – both weight gain and milk production suffer. 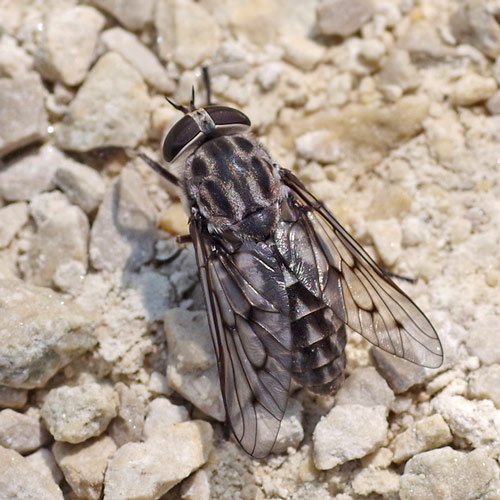 Horse flies are not without predators – birds eat both adults and larvae; nematodes and wasps parasitize the larvae, and adults are captured by solitary wasps to provision their egg caches and by spiders. Click here to read more. 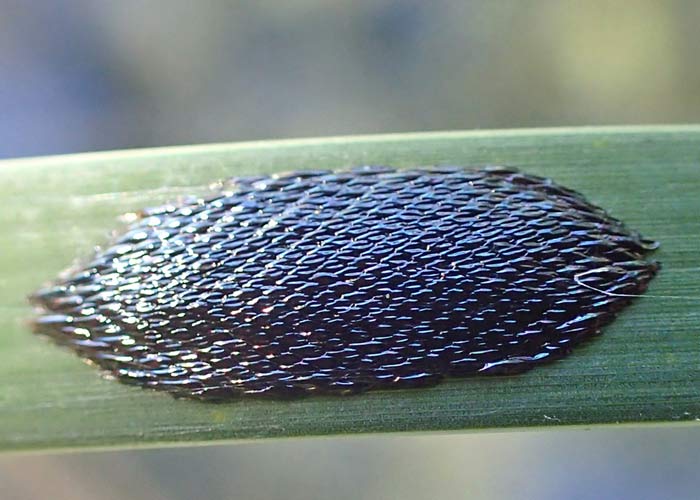 Males chase females aerially after spotting them with those magnificent eyes. She lays her eggs in clumps that may contain as many as 1,000 eggs in several layers. Egg masses are glued to vegetation, rocks, twigs, etc. over the water; the BugLady usually finds them on cattail and blue flag leaves. The tiny larvae are equipped with a spine that helps them exit the egg, and when they hatch, the larvae fall into the water (deer flies) or onto moist ground (horse flies). There they stay, sometimes for several summers, especially in the north, feeding on small, soft-bodied insects and crustaceans, subduing them by biting them and injecting a venom. Click here to read more. (and like their elders, they’re capable of delivering quite a bite, themselves, when handled carelessly).

Horse flies have been bothering people since there have been people, and if you’re on board with the idea that some of the dinosaurs were actually warm-blooded, ancestral horse flies may have fed on them, too. Aeschylus, a Greek playwright who died around 456 BC, wrote that horse flies drove people to madness. 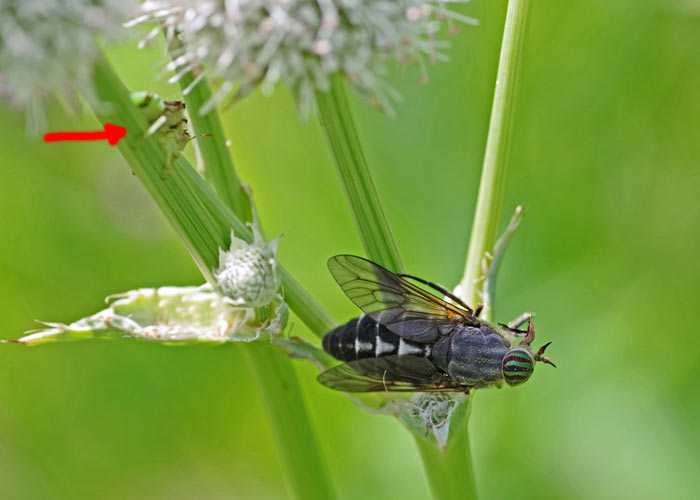 The BugLady indulged in some picture-keying, which is unreliable but is so much fun when done responsibly. She thinks that the ambush bug’s victim may be Tabanus marginalis, which bugguide.net calls “the most common biting fly throughout the world” (but has only three pictures of). It’s a mostly-northern species with disjunct populations along the Appalachians, and it likes cool, wooded swamps.

The horse fly on the gravel path could be Tabanus nigripes, whose larvae are at home in wet areas that contain lots of organic material, like drainage ditches. The Tabanidae of Florida, by Jones and Anthony, tells us that “in recreational areas adjacent to lakes where livestock is not present, this species is reported to be a serious threat of man.” 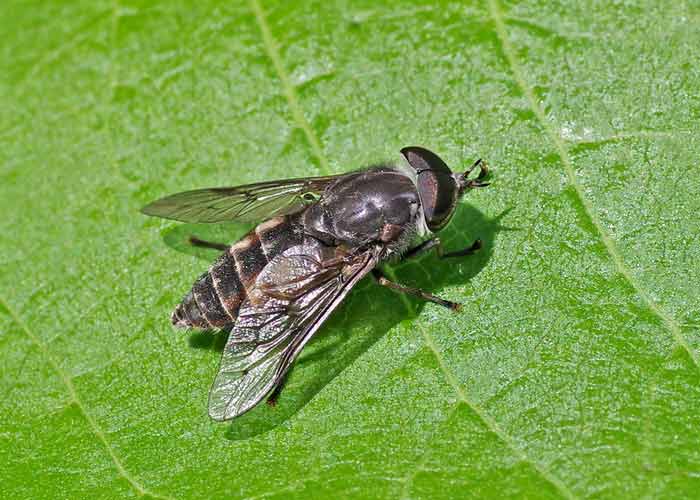 The horse fly on the green leaf is (possibly) Tabanus vivax. One source says the larvae like boggy habitats, but a 1905 publication calls it the River horsefly and says that the larvae have been found in riffles.

The robust little, bullet-shaped fly with the dark stripe on its abdomen, sitting on a wood boardwalk, is probably Hybomitra illota, a horse fly of more northern orientation (mid-America, north). The BugLady found an interesting paper by P.D. Taylor and S.M. Smith in Medical and Veterinary Entomology about the breeding behavior of males. Under certain weather conditions, males aggregate in large groups at “mating areas.” Their behavior is somewhat similar to the lek behavior of some birds. Hybomitra illota is known to bother humans.

But not in God’s Country in December.