The BugLady has been wanting to do an episode about Bess beetles for a long time, but she didn’t have a picture of one (many thanks to BugFans Tom and Joe for sharing). Why Bess beetles? Because they exhibit what’s called “pre-social behavior,” and they vocalize like crazy, and they have lots of names, and then there’s the phoresy. The Insects of Duke University website calls them “one of the most delightful discoveries one can make upon overturning logs.” 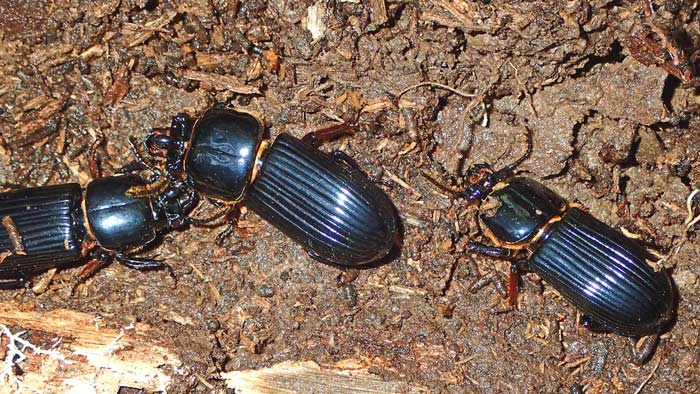 Its common names pertain to its appearance and its voice. Bess beetle seems to come from the Old English “buss” (“kiss”), a reference to a kissy sound the beetle makes, Peg beetle because when it’s sticking its head out of a log, it looks like a carpenter’s peg, and Patent leather beetle is self-explanatory. Horn beetle probably refers to the horn on its face, although one author speculated that the beetle is shiny, like horn material. The species has also gone through lots of scientific names since it was described by Linnaeus in 1764 (some of them, more than once), having been placed in five different genera and been given a half-dozen species names before arriving at Odontotaenius disjunctus. 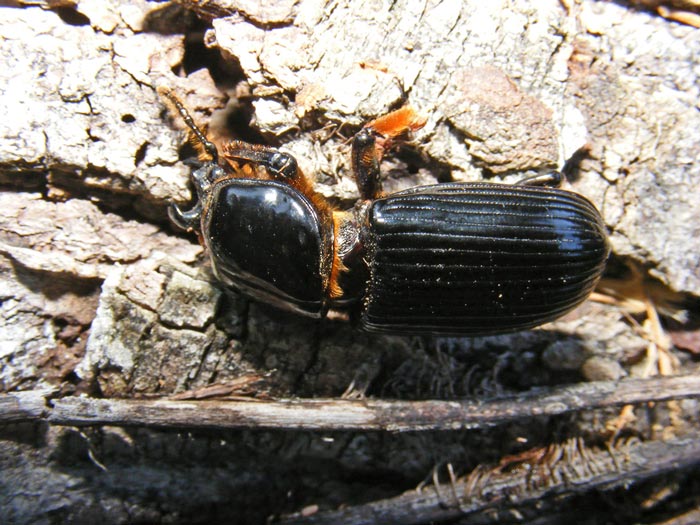 Horned Passalus beetles are in the Bess beetle family Passalidae – a family with about 500 species of mostly New World, mostly tropical beetles. There are two members of the genus Odontotaenius north of Mexico; one is limited to a single county in Florida, and the other is found in rotten logs and stumps in deciduous woodlands over much of North America east of the Great Plains. But not in Wisconsin. According to Kriska and Young in “An Annotated Checklist of Wisconsin Scarabaeoidea (Coleoptera)“,

Rauterberg (1889) reported this species to be widely encountered in Wisconsin, however, he provided no further locality data, and no Wisconsin specimens have been found. It is possible that this species has been extirpated from Wisconsin due to the loss of mature, old growth forests with downed timber of moderate to large diameter in the southern half of Wisconsin.

Unlike the BugLady’s usual fare, this beetle is far from microscopic – measuring about 1 ½” long, with hefty mandibles and an impressive girth (females are the same length as males but tend to be broader across the thorax). 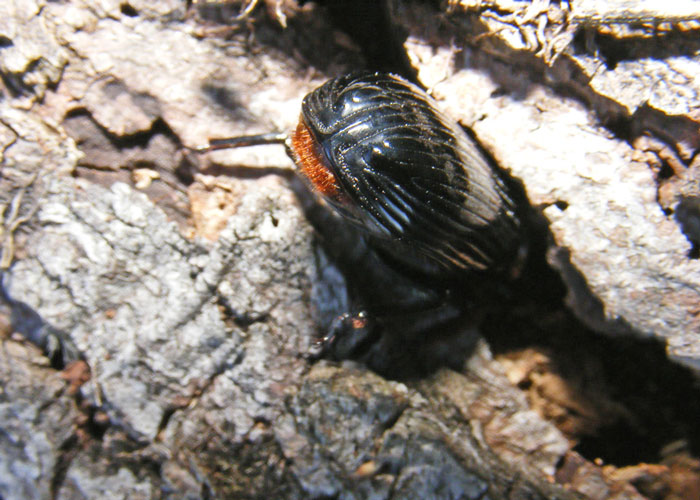 Horned Passalus beetles, like many other Passalids, live most of their lives within the confines of a hunk of rotting wood (they are especially fond of oak and hickory), though they will venture out to crawl around on the log by day or in search of a new home. Their life in the log is somewhat climate-controlled and predator-free, and they will defend it from intruders. They aren’t social in the extreme manner of honey bees and ants, but they are “presocial,” with several generations overlapping sociably “under one roof.” They use their impressive mandibles to tunnel into wood and to eat it, and they raise their young in it, protecting them and tending to their needs (because the larvae are helpless), and the larvae eventually pupate in the tunnels. The beetles will continue to use the same site for generations, as long as the wood holds up; a small hunk of wood will hold one family, but a large log could support several. HPBs are not a danger to homes or decks, but are effective forest recyclers. 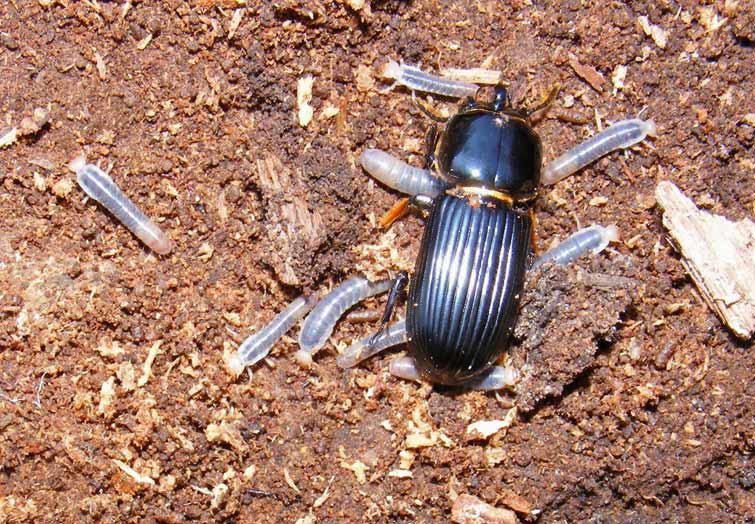 Males vie for territory/sections of the log and for females, using their horns to flip their rivals over. Although open-air nuptial flights have been observed, HPBs mostly mate in the tunnels/galleries, and pairs remain monogamous throughout the summer. The female lays 25 to 30 eggs (large eggs, which the adults pick up and carry around to good locations in the galleries), and she nestles her eggs into cozy nests of frass (bug poop). Larvae are fed by both Mom and Dad on a diet of pre-chewed wood pulp mixed with “parental secretions” and frass, and the adults construct and maintain pupal cells for their larvae when the time comes. Depending on climate and nutrition, the larval lifespan lasts from three to twelve months and adults live about a year.

Injured larvae may be cannibalized, and larvae may also be eaten by unmated HPB adults that attempt to invade their log home.

Newly formed pupae are a beautiful, pearlescent color that gets duller with time, and the newly-emerged adults (tenerals), are a rich red for a while before settling into their adult coloration. Young adults overwinter in the family tunnels and disperse the next spring, but while they’re in the parental log, they may help to care for new siblings. Scroll down this page to see pictures of stages, and be sure to listen to the audio tape at the bottom (or by-pass the pictures and go directly to the audio). 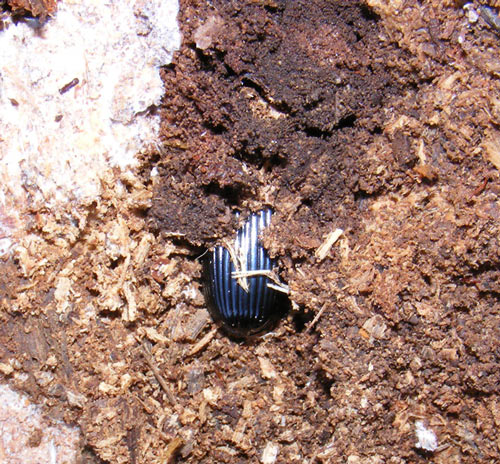 As they tunnel through/eat the wood, HPBs leave behind a trail of frass. The frass is acted on by fungi and bacteria present in the woody galleries, and then it is re-ingested by the adults. This (and the feeding of frass to the larvae) reinforces the rich microflora that allow the beetle’s gut to digest cellulose.

Seventeen different “vocal” communications have been observed in HPBs – a repertory that exceeds that of many vertebrates. Researchers Reyes-Castillo and Jarman call this “the most elaborate system of sound communication known for any arthropod.” Adults make sound by stridulation (friction), using structures located under their elytra (hard wing covers). They rub rows of spines on their folded flying wings against the top of the abdomen; larvae “vocalize” by rubbing legs together. 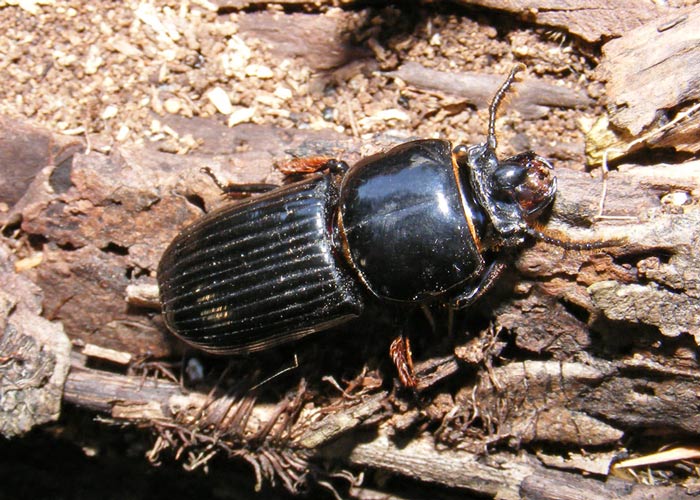 Some sounds are defensive (here’s an HPB reacting to a person who insists on poking it with a stick) and some sounds are social – used in courtship, larval management, or other colony-related purposes. Buchler, Wright, and Brown observed that crows were distinctly put off by the noise, taking longer to attack, kill, and eat vocal HPB larvae or adults.

HPBs are almost never alone – many go through life with a variety of tiny mites attached to their exoskeleton. Most of these mite species are not feeding on the beetles, simply using them as a taxi service to get to more favorable habitats (phoresy), because tiny mites have even tinier legs. One source suggests that Passalids are susceptible to the mites because Passalids are big, dumb, non-predators (the BugLady has no comment about that). Others say that mites like the same kinds of logs that Passalids like, that the beetles occupy a log long-term, not just seasonally, so there’s lots of time for interaction, and that mites that are thrown together on the beetle’s exoskeleton may use the opportunity to do some courting. If all that the mites wanted was a ride, then any bark-dwelling critter would do, but they favor Passalids. Mites find their rides by chemical cues, and they attach in nooks and crannies where they won’t get scraped off in the tunnels. The HPB has 16 species of mites that use it exclusively. 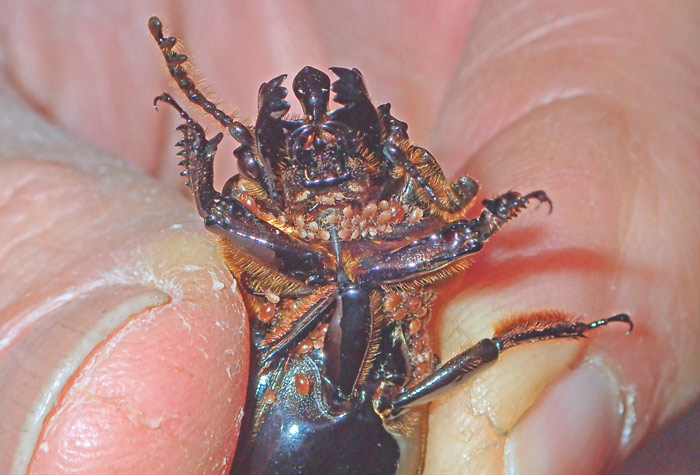 Fun HPB Fact #1 – Although they are fully capable of flight, these beetles prefer to hoof it (slowly) across their landscapes most of the time.

Fun HBP fact #2 – HPBs are very strong – studies show that they are able to pull 50 times their own weight, and stress can make them even stronger. Females pull harder (their greater thoracic girth conceals a greater muscle mass), which suggests that they may do the lion’s share of excavating and pushing through tight spaces. Interestingly, beetles with the longest horns were strongest.

Fun HPB Fact #3 – Because they are big and totally non-aggressive and easy to take care of, HPBs are popular as pets, in insect displays, and for lab work.