The BugLady is amazed at the diversity in size and shape within the order Homoptera (same wing, a reference to the fact that the front wing is similar in texture throughout its length; the True Bugs, Hemiptera, have front wings whose tip/distal half is membranous and near/proximal half is leathery). But, more about the Great Hemiptera/Homoptera Debate in a later episode. The Order encompasses a huge variety of life forms and life styles, from the inconspicuous scales, leaf and treehoppers through the very visible (and audible) cicadas. This episode, “Homopterans on Parade,” is about four groups of small plant-juice-suckers that grace (and sometimes damage) our vegetation.

When the BugLady was a naiad, roaming the fields surrounding her house, she called the little critters that sat on her jeans “Pop-bugs” because they leapt away when touched; it’s a name she still favors even though she now knows that they are called leafhoppers. In practice, they often do sit with their hind legs flexed—“pop-ready.” According to Kaufman in his super Field Guide to Insects of North America, some leafhoppers can leap 40 times their own (admittedly short) body lengths, making them the champion jumpers of the animal world! Immature leafhoppers will run sideways when startled. 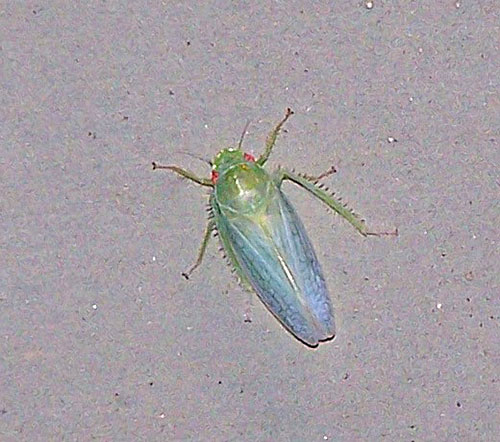 Although leafhoppers all have a basic hatchback body-type, they are diversely colored; some are two-toned, with multi-hued horizontal racing stripes or with stripes saddled across their backs, others come in solid colors. The spines along the outer edge of the hind tibia (BugSpeak for shin) distinguish the leafhopper family Cicadellidae from similar-looking families (in his biology textbook, Keeton opines that the only beings who care about the minutiae of classification are humans; the rest of the critters already know who they are).

A leafhopper that is attached to and feeding from a plant often ingests way more than it needs. Drops of excess sap, mixed with bodily wastes encountered in the gut, are expelled “under pressure” from the leafhopper’s posterior, and this habit has earned them the nick-name “sharpshooter.”

The family Membracidae contains a pretty spiffy bunch of bugs that mimic plant parts. Some look like bits of leaf or twig, but the BugLady’s favorites are the thorn mimics. Their camouflage is achieved by sometimes-bizarre modifications of the exoskeleton covering the thorax. In the interests of full disclosure, some treehoppers feed on herbaceous, not woody plants, and although they sometimes “hop” and even fly a bit, their usual gait is a sedate crawl. The treehoppers that feed on woody plants are found on thin-barked new growth. 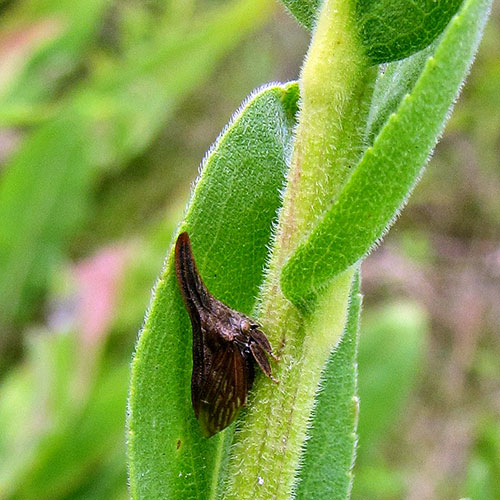 Some female thorn mimics protect their eggs and nymphs. Like the aphids, of previous BOTW fame (also Homopterans), thorn mimics may be herded and protected by ants, which, in turn, harvest the honeydew produced by the thorn mimic. Some are picky eaters: locust treehoppers concentrate on locust trees, alfalfa treehoppers on alfalfa, etc. They communicate by vibrating their abdomens against the plants! (Kaufman, again). 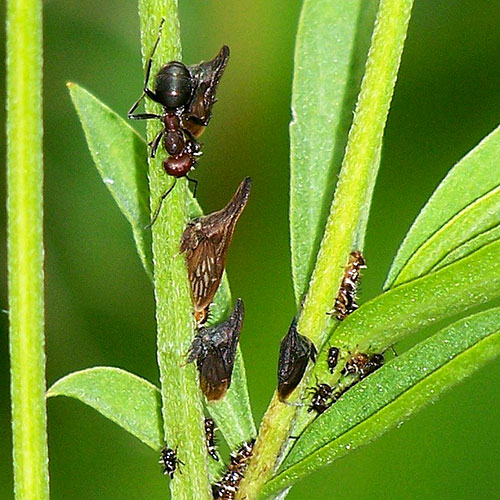 Some folks experience them first as tiny “flying feathers” or as dense masses of cottony stuff stuck to stems and trunks, especially of alders and apples. Neither manifestation immediately suggests “insect.” The white covering, which both discourages small predators and keeps the insect from getting dehydrated, is made from tiny filaments of wax secreted from projections on their backs. As Donald W. Stokes says in his excellent A Guide to Observing Insect Lives, individual wooly aphids look like mini-hand grenades. 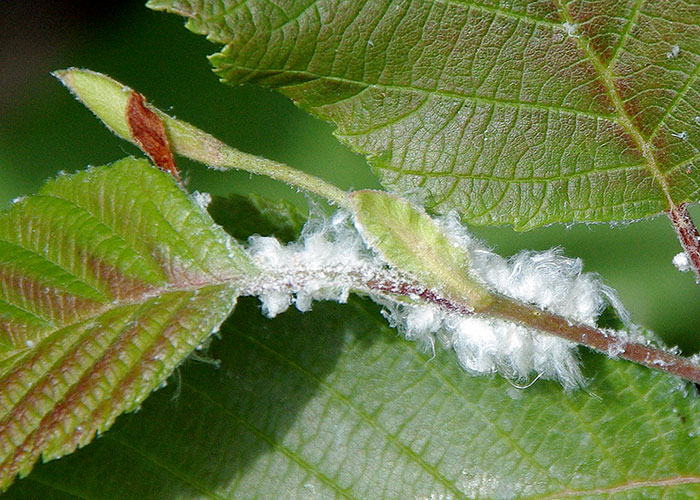 Their life cycles are complicated; some wooly aphids stick to a single host plant and others alternate between two different but specific host plants during specific portions of their life cycle (maple is the wooly alder aphid’s alternate host plant), there may be both asexual and bisexual generations, and a number of wooly aphids are also gall-makers. Ironically, the carnivorous caterpillar of the Harvester Butterfly preys on wooly aphids but the sweet drops of excess “honeydew” secreted by the aphids are eaten by adult Harvesters.

Recently, the BugLady took a glamour shot of a rose hip, and when she edited it, she discovered the scale insects she had overlooked in real life. The dark and lumpy bits on the rose hip stalk are insects. While the male remains mobile, the female nymph, as she matures, becomes immobile and, according to Keaton, may absorb both her eyes and her legs, at the same time secreting a waxy covering. Scales come in shell, bead and limpet-shapes and a variety of colors, but all are small, and they tend to be somewhat communal. The free-roving, would-be dad has to come to the suction-cup mom, though the females of some species reproduce/clone via parthenogenesis (virgin birth). The eggs overwinter beneath the scale. 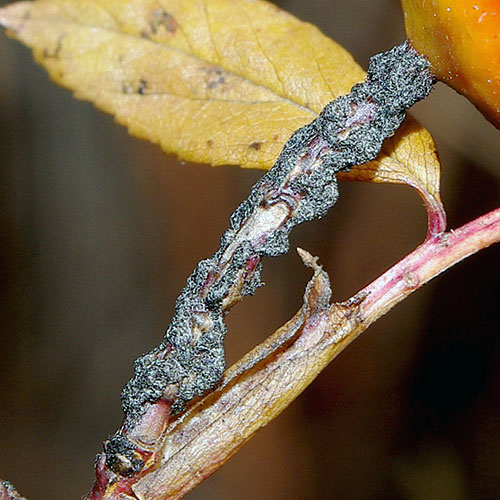 Scale insects have been chewed like gum by some Native people (some 90 species of birds eat them). Cochineal scales, gathered from a variety of cacti, are a historic source of a red dye, and shellac is based on a substance obtained from scales.