The BugLady is already yearning for dragonflies and butterflies and other flying objects that are larger than the Asian ladybugs, Western conifer seed bugs, and the few rogue mosquitoes that are presently sheltering in her house. That she is Skipper Challenged has been discussed in these pages before – many skippers are brown and orange in varying proportions, with a sexually dimorphic variety of pale blotches on their wings. Because she has not applied herself to them, she has a host of semi-identified pictures of skippers (the “semi” part being “skipper”). So, she’s trying to chip away at the group. 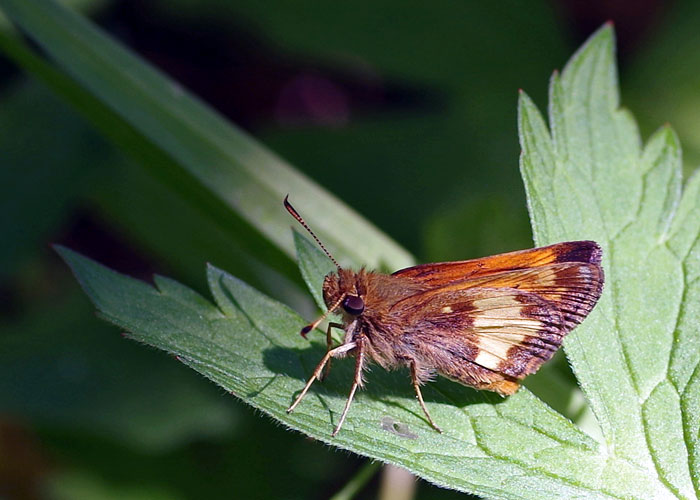 There are about 3,500 species of skippers (family Hesperiidae) on the globe – 275-ish in North America. Although some skippers are strongly migratory, others are not long-distance flyers, and many species occupy a narrow range.

Skippers are small, hairy, big-eyed butterflies with hooked antennae (mostly), a high wing load ratio (short wings on a plump body, like a bumblebee), and a rapid, darting, “skipping” flight. Their caterpillars, whose heads are often adorned with odd-looking helmets or hockey masks, are leaf folders/leaf tie-ers that construct a series of shelters – one after each molt – inside which they feed at night. Most sources now regard skippers as butterflies, but older references may call them a transition group between butterflies and moths, label them as “butterfly-like,” or give them the benefit of the doubt because they are day-flyers.

The Hobomok Skipper (Poanes hobomok), a.k.a the Northern Golden Skipper, is a common, early-flying member of the Grass Skipper subfamily Hesperiinae, whose members perch with their wings folded together when nectaring but with their front wings open and their hind wings only partly so when resting. The males’ front wings may bear scent glands – he uses pheromones when he courts. Their caterpillars feed on grasses and sedges, and they overwinter as caterpillars. 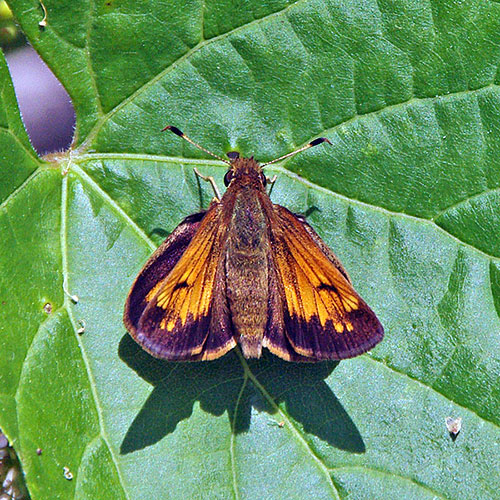 According to the excellent Butterflies of Massachusetts website (150+ years of data analyzed for us!!!), Hobomok Skippers are part of a series of butterflies named by Thaddeus W. Harris and others after Native American chiefs (not after cities in New Jersey). Hobomok was the “chief of the Wampanoag Indians, who helped the Pilgrims upon their landing in Plymouth in 1621.”

Hobomoks appear at the end of May (they overlap the Arctic Skipper, a BugLady favorite), frequenting woody edges and sunny clearings from the Great Plains to the Atlantic, except for the very far North and the very Deep South (see a range map). Climate change may be lengthening their flight period. 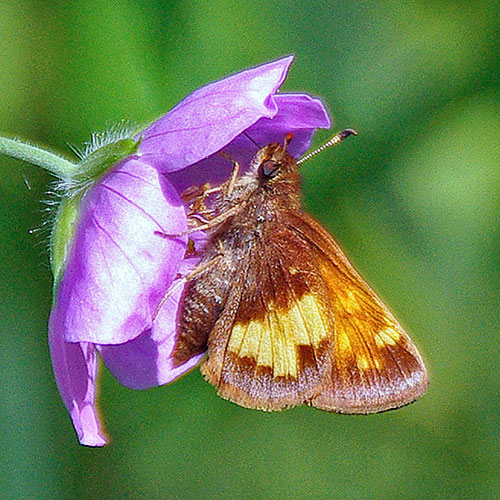 With a wingspread of about an inch, they are moderate-sized for a skipper. Their triangular wings have orange patches in the wing that are bordered by wide, dark margins. A pale marking on the underside of the hind wing looks like a free-form “plus” sign to the BugLady. Females are darker than males, and there’s an uncommon, very dark-form female called a Pocahontas female. See www.carolinanature.com for some great pictures.

In Butterflies of Wisconsin (1970), James A. Ebner says that:

“the Hobomok Skipper is a handsome, bright orange Hesperid. This species is the first of the state skippers to appear in sizable numbers each season. From late May through mid-June, the Hobomok abounds throughout the entire area, frequenting partially wooded areas and forested trails where it often frolics in the dappled sunshine. Adults perch upon the leaves and other foliage during quieter moments. At times, the skipper will stray from its normal woodland habitat and visit the open clover fields for feeding. Despite the relative abundance of the Hobomok in many parts of the country, the early stages are only imperfectly known. The eggs are laid on grasses and the larva is said to remain concealed during the day within a crude enclosure constructed from grass blades.”

Males perch on plants (raspberry canes are a favorite, when they’re available) to watch for females and to spot rivals that need chasing. As caterpillars and as adults, Hobomoks lead somewhat generalist lives. Caterpillars feed on grasses including switch grass and bluegrass. Adults sip nectar from the flowers of blackberries, dandelions, honeysuckle, red clover, milkweed, and vetch, and they also get minerals from bird droppings. 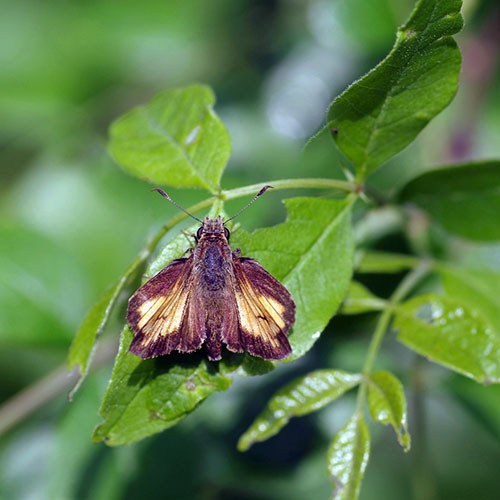 The Butterflies of Massachusetts site urges us to keep an eye on the Hobomok Skipper. It has been remarkably adaptive – probably occupying forest openings in pre-settlement times, switching to more open habitats during the period of agricultural development, and returning to woodland edges in the last century. They point out that its absence from the steamy southern coastal plain suggests that it doesn’t like warm climates. Further, it is “single-brooded throughout its range, and third, it appears to require woodlands, although this is uncertain. Finally, despite using a range of host grasses, Hobomok is not known for breeding in disturbed habitats….” They conclude that “This is a northern-based species which is probably vulnerable to range contraction due to climate change. It might well decline in the hotter parts of Massachusetts.” 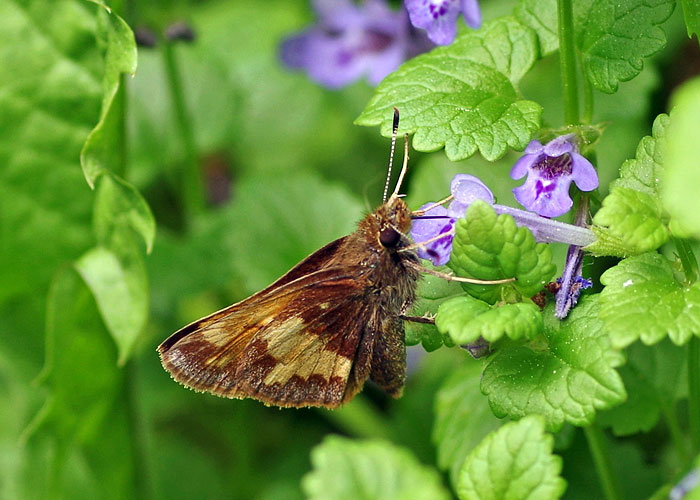 A number of sources point out that the only really similar-looking skipper in the Hobomok’s range is the slightly-more-southern (but-inching-northwards) Zabulon Skipper (the two were finally sorted out in Massachusetts in the 1930’s). Ebner tells us that “It seems likely that both [observers] Hoy and Rauterberg confused this species with the common Hobomok Skipper (P. hobomok). Each considered the Zabulon Skipper to be common or abundant [in Wisconsin]. Not a single specimen has been uncovered since those early days.” The BugLady is including a picture of a female Zabulon Skipper (probably) that she took in New Jersey, and it does resemble a Pocahontas female Hobomok Skipper. 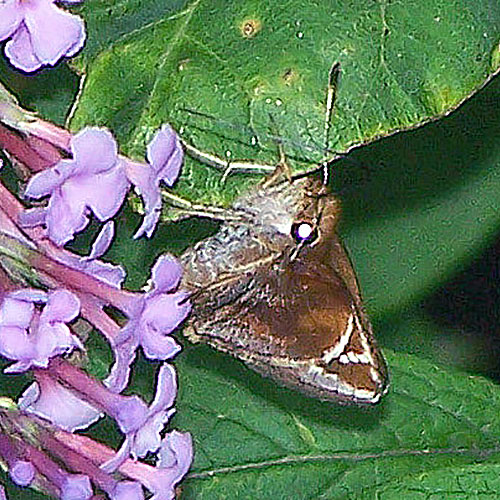 A Honey of a Bee