There are 13 species of Datanas in North America; some are associated with specific host plants like nut trees, sumacs, or azaleas, but the YNC is more of a generalist feeder (adults probably don’t eat). Its menu includes basswood, apple, oak, birch, willow, elm, blueberry, and others, though some sources say that YNCs are more of a problem in tree nurseries and on ornamental plantings than in forests.

Eggs are laid in clumps of 50 to 300 on the undersides of leaves of their host plants in mid-summer. Caterpillars feed together—young caterpillars concentrating on the softer tissue of a leaf’s surface and skeletonizing the leaves; older caterpillars consuming the whole leaf, sometimes even the tough petiole (leaf stalk). The caterpillars feed on the outer ends of branches, causing some defoliation, and when they’re done with one branch, they move en masse to the next. In fall, larvae pupate a few inches into the soil below their host tree, and adults emerge in early summer. There’s a single generation a year here in God’s Country, and two in the South. 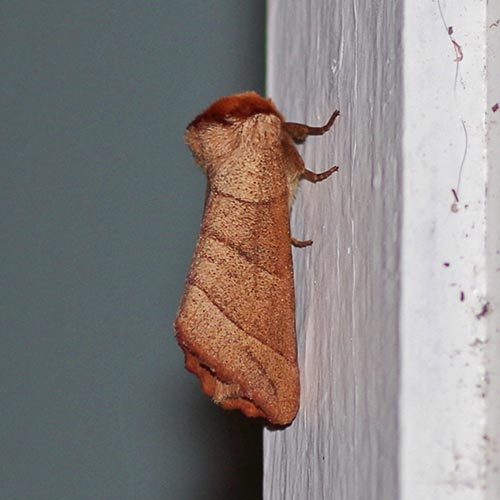 They’re alarming and not usually lethal, but not everyone is alarmed—the author of a blog called 1003 Gardens Bog celebrates them: “I love the “gregarious” caterpillars. They’re like a school of fish; they move together. You can conduct them by moving your hand back and forth where they can see it. They shift in unison as though they were watching a tennis match.”

A few bird species eat the larvae (most birds avoid the really fuzzy caterpillars) and they have some insect predators and parasites. Wagner, in Caterpillars of Eastern North America, writes that “Throughout the Northeast, this species and other Datanas appear to be declining. Compsilura, a tachinid [fly] parasitoid introduced from Europe to control the Gypsy Moth, may be a factor in its demise. Over a ten-day period Compsilura attacked 79% of the fourth and fifth instar larvae that Dylan Perry had set out in Massachusetts woodlands.”

Alarmed YNCs respond both behaviorally and chemically. The picture of the Datana caterpillar attached today is not a YNCM, but it’s a pretty typical Datana in a pretty typical Datana “alarm” posture. They hang on with their middle prolegs and raise their head and foot ends, which surprises a potential predator and changes the outline of its target—and exposes the openings of some glands at the front of the thorax. YNCs, it turns out, have “repugnatorial glands,” and researchers who poke at them report that moisture is released that is both pungent and acidic. Scientists aren’t sure whether the chemicals serve to protect the YNCs or are a dispersal pheromone that serves to encourage some distance between individual YNCs and reduce crowding. Interestingly, the chemicals deployed by the YNC are among those used in the creation of perfumes (no, YNCs are not “milked” for the fluid—there are alternate sources). 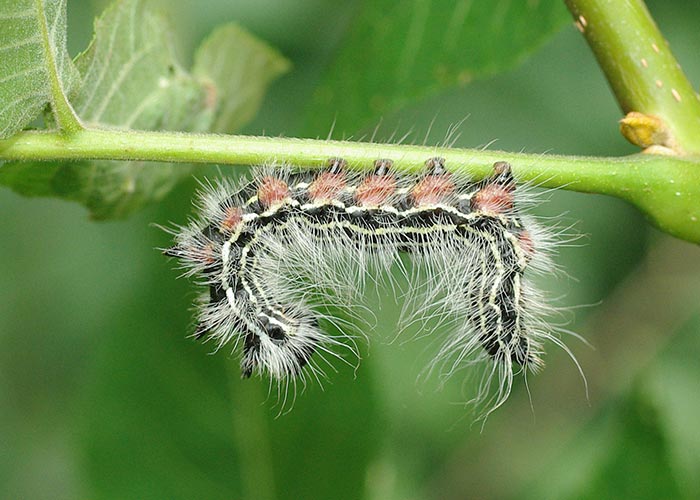 This second Headless Moth necessitates another in the “Who was that guy??” series. The YNCM was named by Dru Drury in 1773. Drury (b. 1725 – d. 1803) spent 40 years in the family silversmith business, and after his retirement in 1789 he pursued his hobbies—which also included gardening, wine-making, and fishing—full time. Although he was an amateur entomologist, he knew, corresponded with, and was respected by the important scientists of his time, several of whom named insect species after him. Drury was one of the first to apply Linnaeus’ new system of taxonomy called binomial nomenclature in his writings. Biographer T. D. A. Cockerell describes a perfect storm—Linnaeus’ reorganization of plant and animal taxonomy, the mushrooming British global exploration, and Drury’s passion for the natural world—“Living in the time of Linnaeus, when the discovery and description of new forms of life was rapidly increasing the bounds of zoology and botany, he entered fully into the spirit of the new knowledge and contributed largely to it.” Cockerell continues “Regarding Drury’s life and work as a whole, we have an excellent example of that innate taste or passion for natural history which inspires a certain number of individuals in every generation and which the majority can neither appreciate nor understand.” (Howard Gardner would describe the Naturalist Intelligence 200 years later).

He amassed an insect collection of more than 11,000 specimens that was considered one of the most extensive and best-kept in England, and possibly the Continent; according to a circular written by Drury about his collection in 1788, “of considerable value; many [specimens] of which, coming from countries exceedingly unhealthy, where the collectors, in procuring them, have perished by the severity of the climate, give but little room to expect any duplicate will ever be obtained during the present age.” He was an active collector, and he maintained a network of sea captains, missionaries, and travelers who sent insects back to him from all corners of the globe (he paid a flat fee per bug, whether large or small). Despite the fact that he flirted with bankruptcy several times during his life, he encouraged and financially supported a number collectors around the world.

Between 1770 and 1787, Drury wrote and published the massive, three-volume Illustrations of Natural History, wherein are exhibited upwards of 240 figures of Exotic Insects, which was posthumously revised and republished as Illustrations of Exotic Entomology. Hundreds of hand-colored, copperplate illustrations were executed by engraver Moses Harris (“likewise a man of original observation and warmly attached to the study of insects.” said a reviewer of the day); Harris was himself the author of several books about insects. Of the illustrations, Drury wrote that “the utmost care and nicety has been observed, both in the outlines, and engraving. Nothing is strained, or carried beyond the bounds nature has set.”