Location, location, location. The BugLady found it exactly where the books said it would be—in a dappled, woody clearing, near the water’s edge (and east of the Rockies). Habitat is important for all organisms, and the habitat of the Harvester must contain the proper food for larvae and adults alike. Harvesters are pickier than most; their caterpillars eat meat.

Harvesters are in the family Lycaenidae, the Gossamer wings, which also includes the familiar Azures/Blues, Hairstreaks and Coppers. The subfamily that Harvesters belong to, Miletinae, is mainly made up of tropical, Old World butterflies (with carnivorous larvae); the Harvester is the only New World representative. 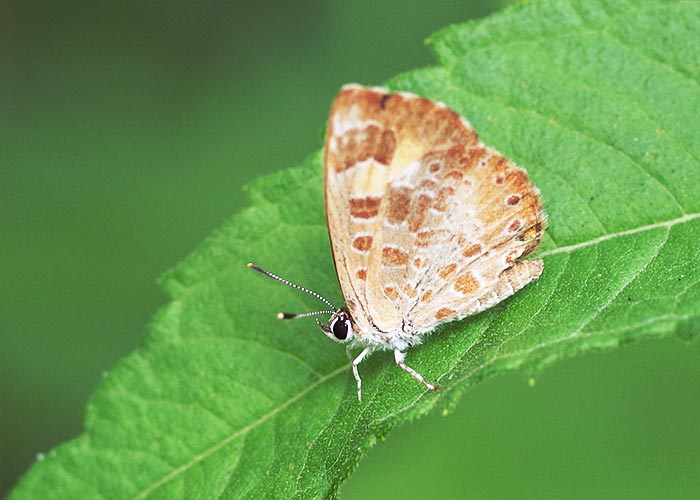 The caterpillars of many Blues and Hairstreaks have beneficial relationships with ants that protect them in exchange for a sweet secretion produced in special caterpillar glands. Many Lycaenid larvae use sound-making structures that produce vibrations in the substrate (the food plant that the caterpillar is sitting on), vibrations that invite ants to find them (these ant-collaborators are called myrmecophiles). Some ants even transport caterpillars to their ant nests and then back to their food plants. It’s a relationship that has its dark side, because these non-Harvester Lycaenids may nibble on an ant larva or two during their sojourn in the ant hill (their hosts turn a blind eye to it and might return the favor if food supplies in the ant hill are low). In Caterpillars of Eastern North America, Wagner reports that unlike many of their Lycaenid relatives, Harvester caterpillars lack the glands needed to produce honeydew for ants, and he calls the Harvester our “only exclusively predaceous butterfly.”

Harvester butterflies don’t stray far from the aphids that support their young because the adult feeds, not on flowers—its proboscis is too short to plumb the blossoms—but on the honeydew that collects on surfaces where aphids feed. Adults may also sip moisture from dung, sap, carrion, and mud. This small (wingspread of about 1 ½”) butterfly is unique in appearance and behavior. Ebner, in Butterflies of Wisconsin, points out an exaggerated “bulge or curve” in the outer margins of the front wings that makes the wing tips look slightly pointed. The BugLady watched “her” Harvester zigzag actively around the clearing, often landing the same spot it just left. It snapped its wings closed the instant it landed, but Mike Reese shows us one with its wings open.

Its awesome scientific name, Feniseca tarquinius, comes from the Latin feniseca, a harvester, reaper or mower and from an Emperor of 6th century B.C. Rome, Lucius Tarquinus Superbus (that’s superb-us, not “super-bus”). The rule of “Tarquin the Proud” ended when he was exiled for excessive brutality. An odd name to hang on a butterfly in 1793, about 60 years before the caterpillar’s proclivities were officially described. Other common names for the butterfly are the Wanderer, because the population is sporadic and pops up where its aphid hosts are found, and the Singing Reaper (more about that later).

So, their caterpillars eat meat, but not just any meat. Harvester caterpillars require wooly aphids, and Wooly Alder Aphids are a common host. Harvester eggs are laid in/near the aphid colony, and the slug-like caterpillars live among and consume the aphids. A newly-hatched caterpillar may immobilize a much-larger wooly alder aphid with silk in order to feed on it.

As usual, a lot happens behind the scenes in order to make that fairly simple “caterpillars eat aphids” statement, and research is still needed to clear up some of the murky areas. Many herds of wooly aphids are farmed by ants that are supposed to be protecting them from just such contingencies. And yet, the ants (if present) not only do not evict the interlopers, they may guard the caterpillars, too. Harvester caterpillars seem to have a number of systems and back-up systems that allow them to live with wooly aphids without being discovered by the attendant ants. 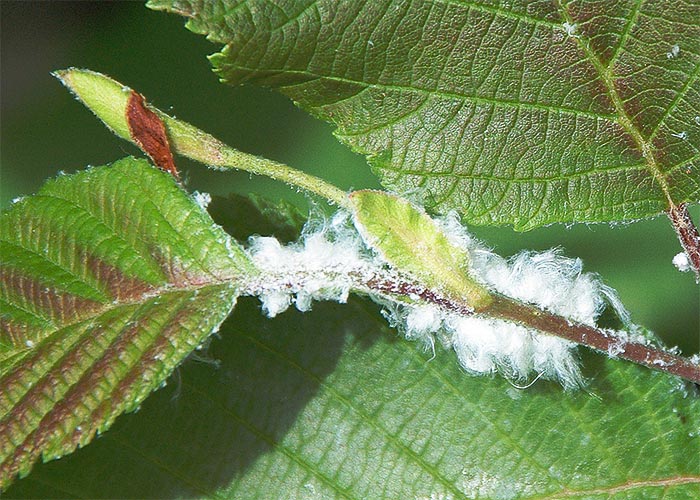 Physical camouflage: Wooly aphids are wooly because of the waxy secretions they produce, secretions that are generally distasteful to predators. Harvester larvae are “hairy,” and Wagner says that “the waxy secretions from their aphid prey and other debris” get stuck in those hairs (in a pinch, the hairs could repel ants, too). Caterpillars may create a silk cover to hide and feed under, a cover that gets littered by dead aphids, and in 2005, Youngsteadt and Devries reported that caterpillars tie aphid carcasses to themselves with silk—tiny wolves in sheep’s clothing. Yet, if certain species of ants are tending the aphids, the caterpillars are less likely to disguise themselves.

Chemical camouflage: In 2006, Lohman discovered that part of the chemical composition of a Harvester caterpillar’s exoskeleton is similar to that of an aphid’s cuticle, so, to an ant, the caterpillars “smell” like aphids. Youngsteadt and Devries felt that of all the cards a Harvester caterpillar can play, this “chemical deceit” is the most important. Ironically, the ants end up protecting their competition.

Auditory camouflage: Although many of their myrmecophilous (a grand word) cousins have sound-making equipment for attracting ants, conventional wisdom has always said that Harvester caterpillars do not. But, in a paper published in 2008 titled “The Singing Reaper: Diet, Morphology and Vibrational Signaling in the Nearctic Species Feniseca Tarquinius (Lepidoptera: Lycaenidae, Miletinae),” the authors state that “larvae of F. tarquinius were found to produce substrate-borne vibrations that possess a long pulse length and narrow bandwidth when compared with other lycaenid calls” (researchers tickled captive caterpillars with fine-haired artist’s brushes). A caterpillar raises its head and thorax and utters sounds described as “a mournful sigh, a falling glissando of six half-steps from F to middle C, or, at proximity, when amplified, the bleating of a sheep.” And, note the authors, “It is possible that F. tarquinius larvae may mimic the acoustical signals produced by the woolly aphids upon which they feed” (assuming that wooly aphids do make sounds – some other insects farmed by ants do).

Harvesters can grow from egg through larva and pupa at lightning speed, sometimes needing as few as eight caterpillar days and arriving at adulthood in three weeks; their protein diet is given credit for their rapid development. Thus, they can squeeze in two or three generations here in God’s Country between May and September. They overwinter as pupae in chrysalises that are described as having a “monkey-face” pattern on the back. The design is more apparent in some of its Old World relatives and has given them yet another common name—Apefly. The BugLady thinks it looks more like a python. Harvester pupae also have structures that allow them to make a scraping sound from within the pupal case, but no one knows why.