Nota bene—the opinions expressed below belong to the BugLady. Don’t beat up on the various wonderful organizations that archive BOTW. Also, grab a snack—this is a long one.

When the BugLady visited southern New Jersey two autumns ago, whole branches of trees along the Jersey Turnpike were festooned with old, ragged, feeding webs created by fall webworms (of future BOTW fame). Nonetheless, she was told by the natives that these were the webs of Gypsy moths. The Gypsy Moth is a destructive alien moth that deserves ample blame for the damage it does; apparently it also assumes blame for damage it doesn’t do.

We all know the Gypsy Moth story; it’s the poster child of Invasive Species. Gypsy moths (Lymantria dispar) were imported from Europe to the Boston area in 1868 by French scientist Leopold Trouvelot. M. Trouvelot planned to do a little genetic tinkering to develop a hybrid caterpillar that was hardier than the native silkworms (America has never had a thriving silkworm industry). Some of his breeding stock (inevitably) escaped. The first recorded outbreak was in 1889, and gypsy moths now occupy a wedge of the U.S. from New England to the Carolinas to Wisconsin (to see a nifty, animated map, check out (Wkipedia’s Gypsy Moths in the United States). They are considered to occupy about 1/3 of the area they could potentially expand into, and they have stripped gazillions of leaves from billions of trees in the past almost 150 years in the territory they do occupy. Gypsy moth caterpillars feed at night on some 500 kinds of plants, and they are considered a major pest of hardwood (deciduous) trees (adults are short-lived and do not feed). 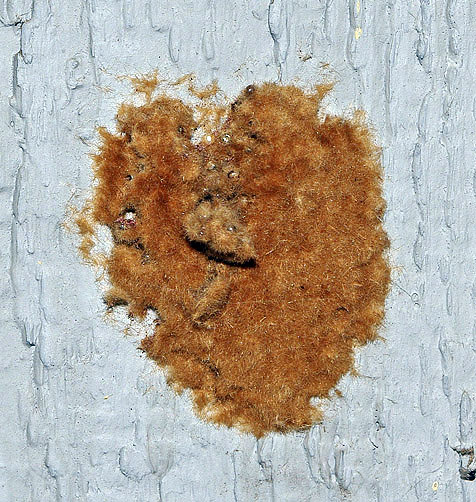 Males are good fliers, but females are flightless. He finds her by using his feathery antennae to pick up her pheromone trail. She lays lots of eggs and then dies within feet of where she pupated. She plasters onto buildings and tree trunks and other surfaces egg cases that are insulated with hairs from her own body (like the egg case pictured). Caterpillars emerge in early spring, along with the new leaves. The caterpillars are mobile little buggers—ballooning through the air for up to a mile at the end of bits of web that they spin. The eggs are even more mobile; egg cases placed on firewood, cars, boats, RVs, and other worldly possessions are inadvertently transported far and wide. 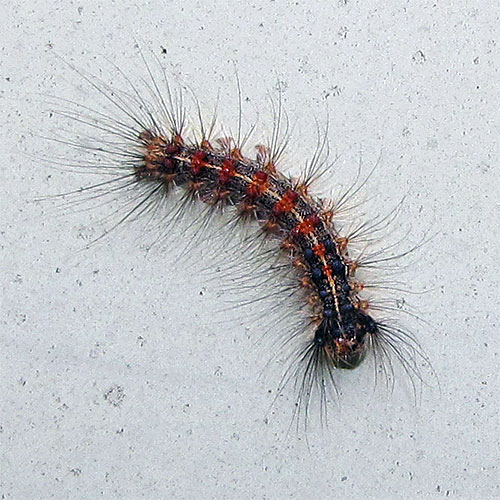 Caterpillars are bristly (some people suffer skin irritations from contact), with two bulbous tufts of hairs in front, and two more aft. Caterpillars feed for six weeks, generally in the treetops. The youngest (black) caterpillars chew holes in the middles of leaves, and when they are slightly older they eat the leaf from its edge toward its center. “Teen-age” caterpillars (more colorful, with paired red and blue spots) climb down to the ground to take shelter during daylight hours, returning to the treetops at dusk (during a heavy infestation, they may feed during the day, too). If/when they defoliate a tree, they hike overland to find another, en masse. Males grow through five instars (an instar is the eating phase between two molting phases) and females have six instars. After pupating for two weeks, males emerge before the females, and the wild rumpus begins (the used pupal case in the picture may not be a gypsy moth, but it looks similar). 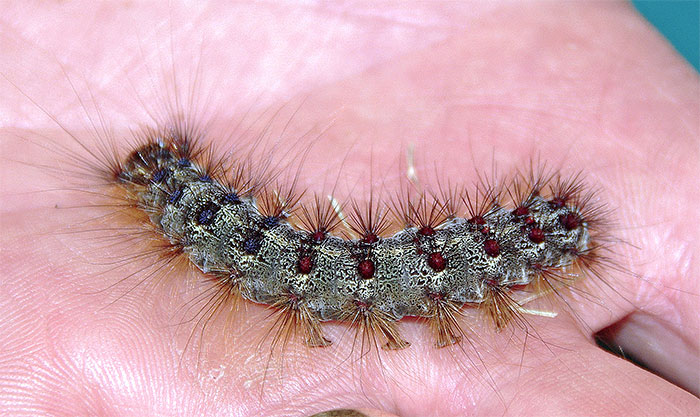 What’s all the fuss about? It’s estimated that gypsy moths defoliate more than a million acres of forest a year—sometimes significantly more—and they consider trees on suburban lawns as tasty as those in the woods. And then there’s the “Ick Factor.” In a large infestation, roads, patio furniture, and outside walls are thick with the sights and sounds of caterpillars crawling and munching and of frass raining down. 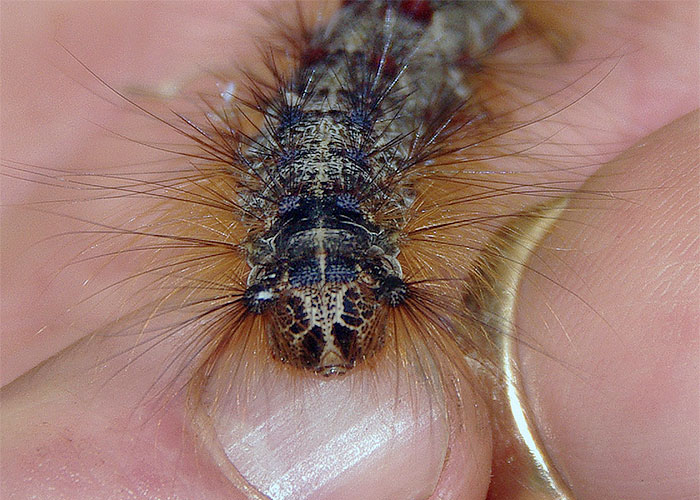 Tell us, BugLady, after nearly 150 years of noshing, are there any trees left in the eastern U.S. at all? Why yes, Dearies, there are. Ever driven the Mass Turnpike (close to gypsy moth Ground Zero)? There are huge forests of trees, miles and miles of trees (though forest composition may have changed some). For many trees, the defoliation is only a temporary nuisance. A tree’s potential for recovery is based on what percent of its leaves are eaten, on its species and health, on the amount of soil moisture, and on whether this is defoliation number one, two, three, or more. Most healthy trees will survive a couple of consecutive years of 50%-plus defoliations, refoliating by mid-summer (although refoliating saps their energy reserves). Stressed or compromised trees may be killed by the next outbreak.

To these, we have added imported tachinid flies (of previous BOTW fame), whose maggots parasitize the caterpillars. Tachinid flies imported to eat imported gypsy moths have acquired a taste for native caterpillars, especially caterpillars of the large silk moths like the Luna and Cecropia, whose numbers have dipped. We also wage chemical/biological warfare on them, in the form of the bacterial pesticide, Bacillus thuringiensis (Bt), and with chemical pesticides—contact poisons that affect a larva’s digestive tract (and which may damage humans). In some parts of Britain, test areas are being “flooded” with pheromones to overwhelm the male gypsy moths’ senses and keep them from finding females. 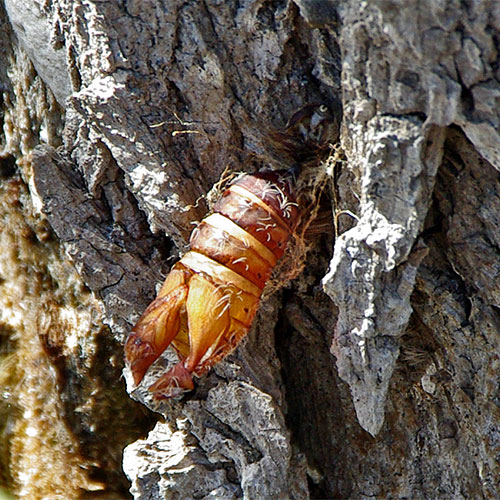 The $64,000 question is “Should something be done about gypsy moths? The answer seems to depend on whether people see a lot of caterpillars on the landscape or only a few. Eric R. Eaton and Kenn Kaufman, in the Field Guide to Insects of North America state that “Probably more damage has been done by the huge amounts of poisons sprayed on forests in ill-conceived attempts to control the moth.” Most control methods are not specific to gypsy moth larvae, and the blanket elimination of generations of larvae (collateral damage) affects the predators of the larvae and the predators’ predators. The ripples move out, and maybe some ripples fetch up on the shores of insect-impoverished landscapes and barren July 4th Butterfly Counts (seems you can’t be a butterfly without being a caterpillar first). And yet people who go to municipal meetings to question community spray policies are accused of being “anti-tree.”

I am out for the week in the Driftless area of Wisconsin, where my family has owned a piece of land for 40 years. Our land is a lovely piece of oak savanna but there has been this horrible “bloom” of gypsy moth caterpillars. The trunks of the trees are positively hairy with them, an alarming concentration that is hard to fathom. Just when one could despair that all was lost, we noticed that they were dying on the trunks, head down. They explode into a goo when touched. This turns out to be the work of some fungus they have ingested that is killing them. So although as youngsters they are doing some damage on the lower branches, they are meeting their demise before going to the next stage. Now the trunks are covered with hairy ‘skeletons’ (what do you call the furry, leggy remains of a caterpillar?).

“Empties,” Naomi, and one of two agents is at work. One is a Nucleopolyhedrovirus (NPV), a naturally occurring, gypsy-moth-specific virus which causes a “wilt disease” that leaves the critters hanging from tree bark (and which is now used by the U.S. Forest Service under the name of “Gypchek”). The other is a gypsy moth-specific fungus called Entomophaga maimaiga (EM). According to the Midwest Biological Control News, EM, a native of Japan (which has its own gypsy moths), was released near Boston in 1910 in an attempt to control outbreaks. Subsequent tests failed to detect residual fungus in the environment, so the experiment was halted. In 1989, analyses of bunches of mysteriously-dead gypsy moth larvae in the Northeast revealed that their deaths had been caused by EM, but where it has been for the past 65 years is a mystery.

Trees themselves may have a solution. Bill Bryson, in A Walk in the Woods, offers this story (whose “science” the BugLady has verified). Oak trees that are heavily infested with caterpillars emit a chemical (distress) signal that travels to trees downwind. As a result, the downwind populations of trees produce higher levels of tannins, chemicals that make the leaves unpalatable. To this the BugLady says “Wowsers!” When the BugLady was taking science (and dinosaurs roamed the earth) a list of plant attributes did not include the ability to send/receive/process/react to this sort of external stimulus.