The BugLady loves weevils—chunky beetles with antennae placed partway between the top and tip of their Jimmy Durante snouts. Weevils (family Curculionidae) are the largest family in the beetle order Coleoptera, which is the largest order in class Insecta, which is the largest class in the phylum Arthropoda, which is, by several orders of magnitude, the largest phylum in the kingdom Animalia (when the BugLady first learned biology there were only two kingdoms, plant and animal, plus a few troublesome critters that hovered in between). Eighty percent of animals are (bone-free) arthropods, and seventy-five percent of arthropods are insects, and every fifth living thing is a beetle.

Many weevils are, well, small and drab. Here are two showy weevils—one alien and one native, one green and one red, one a minor pest and the other a big pest (the BugLady doesn’t like to assign plusses or minuses to insects, but then the BugLady doesn’t grow roses, either). 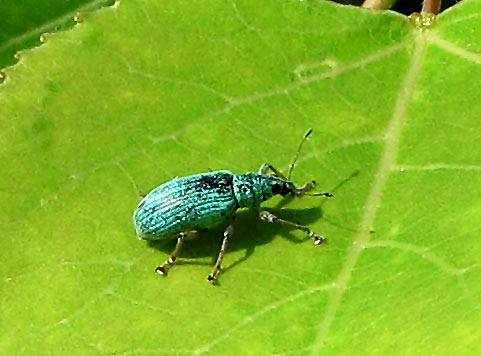 GILWs made their way from Europe to New York by 1906. Today they can be found all over the northeastern portion of North America, including Canada. Metallic, green scales overlay a black body, and the color may fade to grayish-green as they age. With snouts that are short and wide, they are in the broad-nosed weevil bunch.

Eggs are laid in the soil in summer, and the newly-hatched larvae burrow into and feed on what one source called “fine root tissue.” They spend the winter underground as larvae, eat a little more in spring and then pupate, emerging as adults in late May or June.

Adult GILWs nibble along the leaf edges and sometimes the buds of a number of fruit and forest trees (they especially like yellow birch). Most sources admit that they seldom get populous enough to cause injury to a tree’s crown; the damage is mainly cosmetic. But there are some new studies going on about the impact of root-feeding grubs on forest tree germination that may be incriminating.

The Rose Curculio (RC) can be found throughout the northern half of the U.S. and southern Canada, coast to coast (western individuals are a different species). As its name suggests, roses are its BFF (best friend forever) but blackberry and raspberry plants will do in a pinch. It’s native to North America but is mentioned on a site called Biosecurity New Zealand (which imposes stern restrictions on Korean imports) and is listed as present in Russia and England. 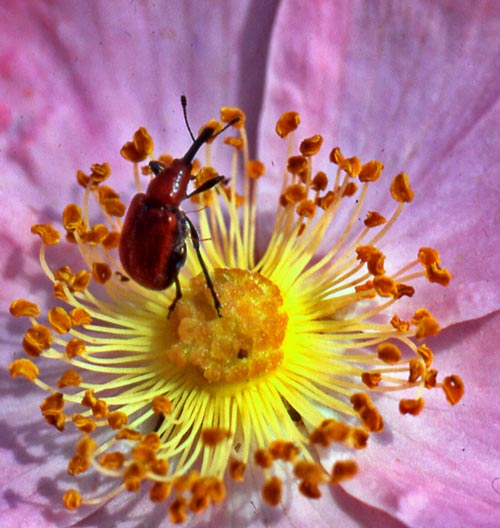 As gardeners know, the RC (Merhynchites bicolor) is not there just to smell the roses. This lovely, red, long-legged weevil lays her eggs (there may be some parthenogenesis—virgin birth—going on with RCs) in the hips (fruit) and the buds of roses. This she does by using the chewing mouthparts located at the end of her long, black snout to bore a small hole in the hip/bud, after which she turns around and inserts an egg. For all the notoriety that this insect has garnered, there is considerable confusion about what the larva does and when. The larva develops (eats) in the hip or the bud. The larva overwinters in the hip, and pupates and emerges in spring. The larva develops in the bud, overwinters in the soil, and eats in spring. The eggs are laid in late spring and the larva feeds on the flower’s reproductive parts (and can even complete its life cycle in buds that have been clipped and discarded). The larva pupates underground and emerges the next spring.

The drilling done by the female can weaken the stalk just below the flower, causing it to droop. To add insult to injury, adult RCs also feed on roses. She loves the pollen, and she will chew into unopened flower buds to get at it. When the flower opens, the petals all have little punctures in them. She’ll also feed on the tender shoots.

A fair amount of ink has been devoted to discussions about the RC’s favorite color of roses. Although they evolved with wild roses (mostly pink) and some say that their taste in domestic roses run to pink, they’ve been seen on roses of all sizes, shapes and colors.

For the chemically-inclined, there are a number of products designed to stop the RC, and parasitic nematodes are a biological control of the larvae in the soil. An alternate method is to hand-pick the adults from rose plants and drop them in a dish of soapy water (alarmed adults bail and play dead, so just knocking them off the plant will make them plunge into the soapy water below); deadhead the roses religiously; and keep damaged buds out of the compost heap (which will otherwise turn into a giant incubator for the larvae).

A Passel of Predators